It was all Molly’s idea. Not unusual. After all, everything we do is always Molly’s idea. This time, she thought it would be nice to invite a priest over for dinner since we were finally settled in Morelia. “Why not?” I asked, realizing that if it didn’t work out I could always remind her that it was ‘her idea’. That’s why I always like to rely on Molly’s ideas. And so we checked the yellow pages under the heading, ‘Priests who are available for dinner’.

The listing contained far more Jesuits than all of the other orders combined, perhaps suggesting that Jesuits are very popular in Morelia. Or maybe they simply wanted to be on the list because they have insatiable appetites. Whatever the reason, Molly decided she wanted to invite a Jesuit because she knew so much about them.

“Jesuits are very learned men,” she told me. “They are steeped in logic, philosophy and other skills that make them the envy of men everywhere,” she continued. “They have a reputation for being very strict in the classroom, and anyone who has been educated by the Jesuits has a very bright future ahead of them. By the way,” she added, “did you know that Vicente Fox was educated by the Jesuits? Just look at what he accomplished almost overnight”!

“Do they enjoy playing poker after dinner?” I asked, aware that I hadn’t had an opportunity to play the game since leaving the States.

Molly scratched her head. “I’m not sure. I know they’re good at shooting pool, they know how to pick a winner at the tracks, they have a way of picking winning lottery tickets, but I don’t think they know how to make a fast buck at the poker table.”

I didn’t say anything. I just grinned. I was always pretty good at poker, and maybe I could show the good Jesuit that he wasn’t perfect in everything.

Several nights later the priest arrived on schedule. Molly had prepared a splendid meal, and after desert we retreated to the den. As Molly served coffee, I suddenly remembered what she had told me about the skill of Jesuits in matters of logic and philosophy, subjects I had little interest in since I had never been trained by a Jesuit. (This probably explains why Molly always introduces me to her friends as ‘a really nice guy but not too swift’).

As for my limited knowledge in logic, what Jesuit could possibly accept my theory that all Irishmen go directly to Heaven, no matter what kind of life they lived? No, Molly says the Jesuits are far too smart to listen to that sort of nonsense. And so, I made the drastic mistake of asking our guest if he would like to play a friendly game of poker. He agreed, and since he was our guest, I felt it only proper to let him set the limits. Another mistake.

A friendly game of poker? The game was anything but friendly. At least for me. I started out quite well, thank you, until he suddenly looked me in the eye and spoke out of the side of his mouth, his voice barely audible. “Been to confession lately?”

Molly dropped her coffee cup. I lost my concentration. From that moment on, I couldn’t draw a decent hand. He not only saw through me, but my cards as well! Molly sensed disaster as my money quietly slipped away. She moved her wheelchair closer, then leaned over, speaking in a nervous whisper. “Be careful, Paddy, this is one clever padre!”

Up to this point, I had never offered the Jesuit a drink. That’s because I didn’t know Jesuits drank. Wrong again. He accepted a glass of brandy, while Molly and I poured ourselves some Mexican beer. I figured the Mexican beer would give me the lift I needed. No such luck. All the Mexican beer did was make me believe I still had a chance. Like the time I called his hand, then raised with a full house. Aces over Queens. Not too bad, the Mexican beer told me. Not too bad at all! Until he flashed a straight flush. So much for Mexican beer.

It was the longest night of my life. Finally, I folded for the last time with the words ‘tap city’. ‘Zilch’. ‘Nada’. ‘Alli Babba poo poo’ (whatever that means). It was then that the Jesuit asked if we would like to have our home blessed. We were grateful, of course, but his timing was off. He should have blessed our home before we started playing poker. Then maybe I would have had a chance. Molly thinks he delayed the blessing on purpose for his own personal gain.

Despite my poor display at the poker table, I managed to get even in my own way. I asked the priest if he would hear my confession. I was certain this would take his mind off all the money he had stuffed in his pockets and socks while listening to sins he didn’t even know existed.

In the past, I had always cringed while entering the confessional, convinced the priest was about to hear things he had never heard before; that he would eventually flee the confessional, screaming at the top of his lungs about some wild maniac he had just left behind, hiding behind a thin curtain in a darkened room.

And now, about to give my confession to a Jesuit, I was proven wrong once again. No matter what I said, he never flinched. At first, I thought he had fallen asleep. But no, he never gnashed his teeth, never moaned, never rolled his eyes in his head as some priests are prone to do, never let on that I was some kind of a misfit. He just listened, nodding from time to time, then closed the ceremony by giving me penance that would take hours to fulfill. Maybe even days, according to Molly.

At least we had learned a valuable lesson. Never play poker with a Jesuit. Especially a Mexican Jesuit. Why a Mexican Jesuit? I’m not quite sure. Neither is Molly. Just don’t do it. You’ll thank me later.

In the meantime, Molly came up with yet another idea. “Next week,” she announced with a smile, “we are having another guest for dinner. A Rabbi…” 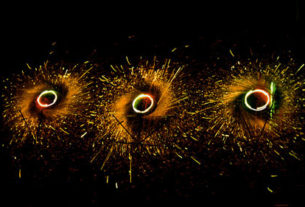