The simplest way to describe this tale is to quote from the author’s preface.

“South of Yesterday” is the story of my mother’s life as a bride coming to a strange land. The book flows through the charmed life of an American living in Guadalajara in the early nineteen hundreds, into the violence of the Revolution, escape from and return to a much-beloved Mexico. I related never before publicized events of history.” And Virginia Miller does just that.

It’s a good read about real people facing up to quite dire circumstances and extreme and often violent changes in their lives.

The narrative gets underway with the author’s parents, Edmond and Ninon, newlyweds, arriving in Manzanillo from Seattle, Washington. We see the action mainly from Ninon’s point of view and we experience her shock at the contrast between the comfortable world she has left and their arrival in the primitive (at that time) port of Manzanillo. With some difficulty, Edmond had persuaded Ninon’s parents to allow her to marry him. He was a rancher in Mexico with a large property of some thirty thousand acres and several thousand head of cattle near Colima. He also owned gold, silver and copper mines and property in Guadalajara.

Ninon’s father had grave reservations about allowing his daughter to go off to a country that was threatening revolution at that time – 1913. He even wrote to the U.S. Ambassador to Mexico to obtain reassurances that Mexico was a law-abiding country. He was advised that neither President Woodrow Wilson or General Huerta, the new Mexican Presidente, desired any trouble that would upset relationships between the two countries. Reluctantly, he gave his consent. However, uprisings had already started in the northern states of Mexico and were soon to spread to the rest of the country.

The couple traveled to Guadalajara where Ninon met her father-in-law, Alfred Downs, who just happened to bring a tapatio band with him, as well as a small army of noisy well-wishers. The couple proceeded to settle into their home in the neighborhood of – by an odd coincidence – Seattle (pronounced say-at-lay). Her husband was away managing his various enterprises much of the time but Ninon settled contentedly into her privileged life of socializing, entertaining and gossip.

Things changed in 1917, however, and when Mexico declared war on the U.S. the family were forced to flee, leaving behind their houses and properties and various businesses. The author was only three days old when this evacuation took place and her parents took her to California aboard a tramp steamer, along with two hundred or more other evacuees. In Mexico, the Revolution was well underway with Pancho Villa and Emiliano Zapata and others running rampant in the countryside.

Years later, the family eventually came back to Mexico and found the Seattle neighborhood a ruin but – surprise! – their house had escaped the rampage. It was intact and well cared-for. There was even another surprise awaiting Edmond and Ninon – but I’ve told you enough of the plot already.

It’s a heckuva good tale that Virginia Miller has given us here and she has captured that privileged life perfectly in her descriptions of the early days in Guadalajara and the later collapse of all that comfort and luxury. The author has lived most of her life in Mexico and obviously loves he country. That fondness and familiarity shows throughout the narrative.

However, having said nice things about the story, I feel I must warn would-be buyers that I have a major criticism to make of the finished book. It concerns the editing, or the lack of editing, that is exhibited throughout this entire volume. Whoever was responsible for going over the copy before publication did an absolutely lousy job. I don’t think that’s necessarily the author’s responsibility. Publishers are supposed to have people who are experienced in tidying up all the glitches that occur in almost every piece of copy. “South of Yesterday” has more spelling and punctuation and typographical errors in the text than, frankly, I’ve ever seen in a book anywhere. So, as you’re reading, you’ll come across sentences like: “…she was nevertheless aware that her beasts and buttocks were being appraised leeringly.” Or: “…..the soldiers riding escort on either side of the car, and the big gray mare, the mule and the general’s house tied to the rear.” Or: “Ninon hatted him.” And so on…

It’s a pity about that editing, or the lack of it. But this former editor found something on almost every page of the book. Frankly, I feel that potential readers should be warned of such faults that they might encounter. And it’s a great pity that an easily-remedied problem should mar such an interesting story.

The book is published by We-Publish.com, Laredo, Texas. I would frankly advise We-Publish to do something about their editing problem. A copy can be ordered by calling 766 2278. I’m advised that it will be available from Amazon.com but at time of writing this review I couldn’t find it mentioned there.

In my humble O: A damned good story. Well worth your time.

South of Yesterday: A True Story
By Virginia Downs Miller 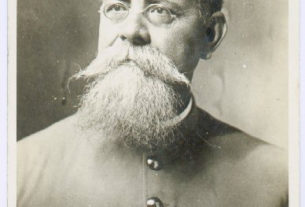