About 25 miles off Cancún’s northeastern coast, past Isla Mujeres and far into the Caribbean waters, some of the largest known sea creatures loll their summers away. They are whale sharks, a gray-and-white spotted fish that can measure up to 40 feet long and weigh more than 15 tons. That’s bigger than many dinosaurs.

On this particular late August morning, I would be hanging out with them for a while. Hopefully, they’d already eaten breakfast.

No worries, I was assured. Whale sharks are mostly vegan. These gentle giants dine on plankton – a nutrient-rich salad of algae, vegetative bits, fish eggs, and various yummy micro-organisms, although they don’t mind a gulp of small fish now and then. Ocean currents every year carry abundant reserves of plankton to this part of the world, and the whale sharks follow, congregating in groups as large as 100. Because plankton drifts near the water’s surface, swimmers can get up close and personal, outfitted in just a mask and snorkel. Bring an underwater camera, and you just might luck into an amazing selfie with a whale shark photo-bomb. On some days, you don’t even have to get wet: whale sharks can be viewed from your boat. 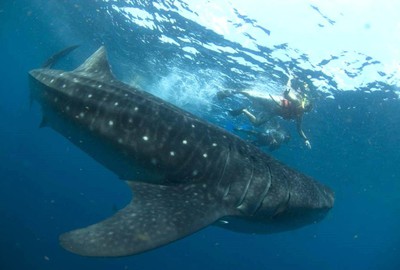 But first we had to get there. Our group of ten, clad in life jackets all, sped off in a canopied motorboat shortly after sunrise. The beachfront grew distant until disappearing into an aqueous horizon. The ride was fast and choppy, but my Dramamine did its job.

Nico, our guide from Solo Buceo, a family-owned dive shop and tour operator that was the first to offer whale shark expeditions in 1998, gave us instructions:

“Stay at least three feet away. No touching. Whale sharks are not afraid of humans because they don’t have to be, but they can be spooked if too many people converge too closely. Then they’ll dive downward and disappear. And apply your biodegradable sunblock now, so it soaks in. If you put it on right before jumping overboard, it will simply wash off and leave you unprotected. That soul-warming Caribbean sunshine can be cruel.”

About two hours later, at a location where no land was visible, the captain slowed the boat and then cut the engine. We were the first ones to arrive. During high season, when a dozen or more boats are gathered, guides can accompany only a few snorkelers into the water at a time. The rest watch from the boat and chill or take photos. But the season was nearly over, and many tourists had ventured home to tackle back-to-school chores. Nico said we could all jump in together, which we did.

I stroked a few yards, peering into the water through my mask, and a whale shark slowly glided by. I could clearly see its neat rows of patterned markings and contrasting white underbelly. Its wide, flat mouth, which I imagined could easily suck up a person, was stretched open and pulsating. Whale sharks are filter feeders. They imbibe massive amounts of water at a time, and screen out what they don’t want through hundreds of tiny, jagged teeth and five pairs of gills. This one wasn’t interested in me. Nor the next. Or the one after that.

Below me were several spirited juveniles who darted about their elders. Further afield was the largest of the day’s sightings, a Goliath oblivious to the circle of human admirers in its quest for the prized plankton.

I turned my head and realized a very determined whale shark was propelling itself directly at me. Uh-oh. No matter how many times I heard that I would not be appetizing to the whale shark palate, I preferred not to negotiate. Indelicately, I scrambled sideways to yield the right of passage. Later I learned I could have dived below and allowed it to pass over me.

Suddenly Nico grabbed my hand and pulled me alongside him. I had mentioned earlier I wasn’t a particularly strong swimmer, and he didn’t want me to miss any of the show. With a powerful wrist action, he steered me a quarter turn and pointed to a whale shark passing in front of us. Another quarter turn, and another whale shark. And yet another. For a magical moment, we were surrounded by a triumvirate of whale sharks!

After an hour or so we climbed onto the boat for the long ride back to the dock. Nico estimated we had seen 30 whale sharks that day. Reflecting on our adventure, I was awed to realize something so humongous exists in real life, and that I had had the unique privilege of encountering its presence within its own environment. Not in a zoo and not in an aquarium. Swimming with whale sharks is like a safari, an underwater safari.

Solo Buceo is a family-owned dive training shop and tour operator for water adventures and is headquartered on Punta Cancún in the heart of the city’s Hotel Zone. Whale shark tours run daily March through September. Contact Solo Buceo for details and costs. For more information: www.solobuceo.com or frontdesk@solobuceo.com 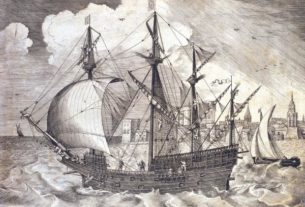 1 thought on “Swimming with whale sharks in Cancun: An underwater safari”

The Cuisine of Hidalgo: Spanning Climates and Cultures