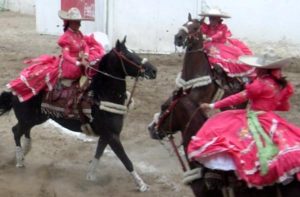 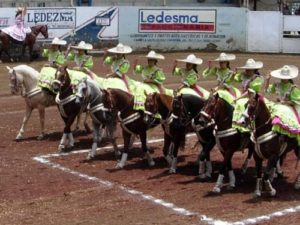 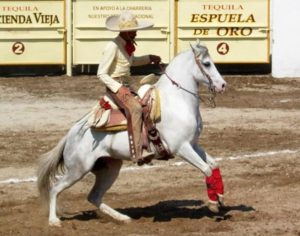 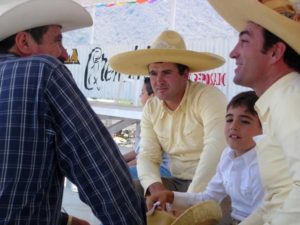 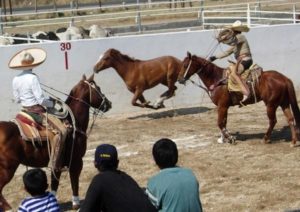 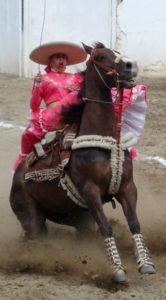 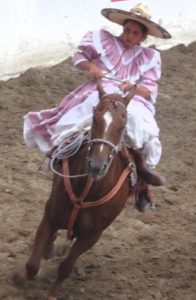 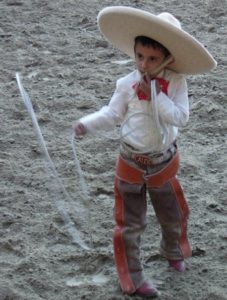 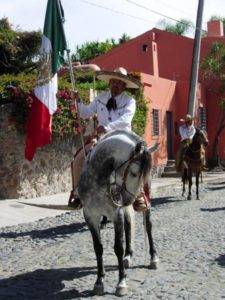 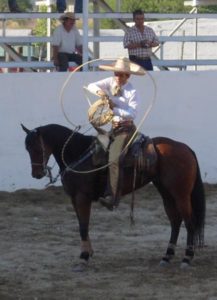 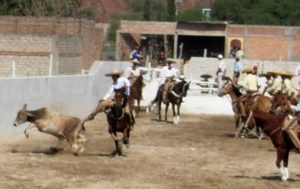 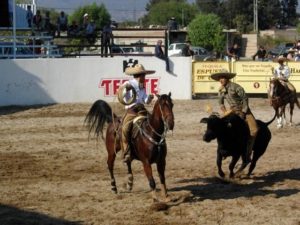 The Day of the Charro, celebrated on September 14 in Mexico, oft times is overshadowed by the multitudinous fiestas, speeches and fireworks celebrating Independence Day on September 16. In his elegant costume and wide sombrero, the charro is a cowboy but also a gentleman.

With so many sophisticated cities in Mexico, you might think the cowboy would be out-dated. Not so. Guadalajara, Pátzcuaro, Mexico City, Aguascalientes and Zacatecas all enjoy charrería. Even Puerto Vallarta, Acapulco and Cancun applaud their horsemen and women parading through town in their finery.

Charrería is a tradition, which runs in families just like Tía Maria’s famous mole sauce or Don Raul’s special pozole. In other words, it is passed from one generation to another. As soon as a tot can seat a horse by himself, he becomes a little charro, or if a girl, she becomes an escaramuza.

Charreadas are similar to the rodeos north of the border, but much more colorful and spectacular. There is riding, rope twirling, calf throwing and wide brimmed hats, but there the similarity ends, for the most part. For one thing, our northern cowboys ride, rope and throw for money. Mexican charros do it for honor and the sport.

The charro wears a special suit, like none I’ve ever seen on Billy the Kid or John Wayne. There are five styles of charro outfits and each one is chosen for its own occasion to be worn. One can go from a working suit through dressy, formal, elegant and all the way to black tie. I’ve seen them in white, beige, brown, black and grey. The color doesn’t seem to be as important as the cut. The jacket is snug fitting and comes only to the waist. Some are heavily embroidered. The pants have slim, tight fitting legs; the dressier ones have gold or silver buttons running down the outside length of the leg. The suit is worn with a short boot, not the regular cowboy boot. A bow tie, white shirt, and the typical big brimmed, embroidered sombrero tops off this costume.

I have heard there were cavalries of charros that accompanied Emperor Ferdinand Maximilian around the countryside when he was trying to oust Benito Juarez and his fighting men. Maxy was a sharp dresser, so perhaps the charros tried to imitate his showmanship in clothes as well.

The escaramuza wears her own beautiful attire. The colors are bright and heavily trimmed with lace. The bodice of the dress comes to the neck. No low-scoop-necks for these equestrienne damsels. The sleeves are puffed, the skirt is made of billowing ruffles; big enough to allow the rider to decently ride side saddle, and still have enough skirt left to cover the horse’s rump. She wears a low boot like her masculine counterpart, but hers are usually colored to match her dress. Her spurs are brightly polished. Her big sombrero is tied snugly under her chin. These are not tied like baby bonnets or grandma’s night cap. Under the chin means exactly under the chin, almost at the point of the chin. This ensures the rider will maintain the correct posture throughout the performance, or she loses her hat.

The charro and escaramuza learn to become skilled performers on horseback. The girls are graded, not only on their riding abilities, but on their beauty and poise as well.

Their horses are groomed to perfection before the big event. Manes are carefully brushed as smooth as a young girl’s locks on her way to her first prom. The horses’ tails are combed and brushed equally as smooth and often are braided with brightly colored ribbons. Most of them wear a high-slung breaching strap that holds their tail up high; giving them the appearance of prancing, even when walking at a slow gait.

Juan Jorge Anaya Pelayo is Talpa’s horse whisperer. Charros from Zacatecas, Aguascalientes, and even as far away as Monterrey bring their problem horses to J. J. for special training. I’ve sat in his corral and watched him work a balky horse for at least forty-five minutes. They truly do seem to come to a mutual understanding. They look each other straight in the eye; one snorting and the other speaking in a soft gentle voice, never breaking eye contact until, at last, the horse gives in.

J. J. has shared some of the best kept secrets in these mountains with me, some of which I’m about to share with you. To get that fine body sheen, you saturate a cloth with baby oil, wring it out, and then let it dry a bit. Rub the horse down with the oiled cloth, being careful not to rub anywhere a strap or rein might go. You don’t want that saddle or guiding rein slipping while you are on a ride.

This is an even bigger secret. Some charro horses wear pantyhose! It is the truth! There is a special commercial product made just for polishing horses’ hooves. After the desired shine is achieved, they spray the hooves with hairspray, the same as we women use! To keep the hooves clean and shiny before they begin the parade, they split two pairs of panty hose up the middle and sock the horse’s legs! Roy Rogers would have fainted!

The arenas where charreadas are performed are called lienzos. At first glance you might even think it is a bull ring because it is built in a rounded shape with seating bleachers going from ringside up. There are two arenas. The first one is sixty-six yards long and thirteen yards wide. That is the arena they use to race the horses into the bigger one, which is round shaped, measuring forty-four yards in diameter. That is where they strut their stuff.

It is a thrilling sight, almost terrifying, to be sitting in one of the lower bleachers and see twenty tons of decorated horse flesh come pounding directly toward you at break-neck speed, only to stop on a dime in front of your nose.

In Talpa de Allende, the Día Del Charro starts out with the elegantly dressed riders proudly guiding their magnificently groomed beasts down the main street to the tunes of several accompanying mariachi bands on their way to the main church, Our Lady of the Rosary. From time to time, the parade will pause for one of its riders to show off his skills to the crowds lining the street. He may have a special rope twirling trick or maybe his horse can dance on his hind legs to the tune of “Guadalajara, Guadalajara!”

The fun isn’t over yet! There are two huge restaurants in Talpa; one across the street from the other. La Huerta and Fiesta Talpa have opened their doors to graduating classes, baby baptisms, birthdays, wedding receptions, wedding anniversaries, and other special events such as today. The townsfolk are celebrating in full swing. By Deep South terms, you might say, it’s “all-day singing and dinner on the ground day.”

This is corn and cheese country in Jalisco. Every home-cooked meal this time of the year includes boiled corn-on-the-cob. Until I moved here, I never knew one should cover the pot of shucked and de-silked ears with a few of the shucks before beginning to boil. It gives them a more authentic flavor.

We don’t get the fancy cheeses made in other countries, but we do get a fairly good goat cheese, and other cheeses made from cows’ milk. Our local farmers (or should I say, their wives?) produce queso cotija, which is fairly close to a farmers cheese, adobera, which melts well enough to be substituted for Monterey jack, and my favorite, panela. The famed Diane Kennedy, who conquered the Mexican kitchen, has a recipe with which I have tampered. (See end of article) On this particular day in these two restaurants, there are no menus, but the places are loaded with attendants bringing ice and glasses, keeping time with the blaring norteña music. The tables are set with the usual bowl of ice, a bottle of tequila and Squirt. The women begin to move from table to table offering what they have brought from their ranches: corn on the cob, cheeses, tortillas filled with beans, special sauces, tamales, and we never forget the starter; always pico de gallo, which consists of cucumber, jicama, grapefruit or anything else you want to put into it. Just douse it all with salt, lime juice and a touch of cayenne. Voila!

Most freshly-made panela needs to age a bit to be super-palatable. Set the round of panela in a colander over a bowl. Cover with dish towel, refrigerate and leave overnight. Remove from refrigerator. Place panela in a lipped dish such as a glass pie plate. Using a fork, poke holes through the cheese. Add to your liking: olive oil, garlic powder, crushed oregano and cayenne pepper. Pour over cheese. Cover with plastic wrap. Refrigerate and serve at room temperature with crackers or crusty bread.