With his parents’ permission, I took Fernando, my 12-year-old English student, to Guanajuato, the seat of the Mexican War of Independence, for two days.

Fortunately, I’d been warned by a friend to avoid driving in Guanajuato because of the extreme difficulty in traversing the city streets, which are laid out with no pattern, no design, and no logic.

As in Boston, Massachusetts, where streets are paved over the original meandering cow paths, in 1548, the founding fathers of Guanajuato decided to simply follow the terrain. Additionally, antiquated tunnels winding erratically through the city and can be either walked through or driven in, were once the sewer system. It’s terribly Jean val-Jean, if you ask me. However, Fernando loved taking a taxi through the tunnels and seeing the water seep through the ancient stone walls. Me? I’d rather have root canal than sewage canal. I didn’t know at the time that it was Fernando’s first taxi ride or ride in any car at all for that matter.

One of the first places on our agenda was the Don Quixote Museum — there were paintings, murals, stoneware, ceramics, statues and other works of art. If you find it hard to believe an entire museum devoted to a man who never lived, in the US, there’s a museum for “Peanuts,” a cartoon character who never lived either.

When making advance reservations for the Hotel San Diego, I had been assured we would be given two separate bedrooms. What did we end up with? The honeymoon suite. There I was standing on a romantic baroque iron balcony overlooking the colonial Church of San Diego — with a 12-year-old boy.

Together we watched as today’s answer to Quasimodo tolled the great church bell, his body alternately rising from and returning to the ground as he pulled on the rope with all his might. The clangor was deafening, especially at 11 o’clock — too bad one o’clock comes only twice. I chose to look at the bright side. Since this man never slept, we didn’t need an alarm clock.

There’s an awful lot to be said for this Auntie Mame stuff. For instance, imagine my pleasure at learning Fernando had never been on an elevator in his life. You should’ve seen his face as the elevator rose and his stomach fell. He grinned from one ear to the other, and held his hand over his stomach much as a pregnant woman does when she feels her unborn child’s first kick.

We ate at a sidewalk cafe that offered nutritious hot fudge sundaes and banana splits, which sounded like proper fare for a 12-year-old on his first adventure. Fernando watched and replicated my every move; he hadn’t eaten in a restaurant before, nor had he ever tasted these delectable sweets. We sat by a window so we could check out the social activities across the street on the steps of the Teatro Juarez, where college students gather after class to study and talk. Little did we realize that every panhandler in town habitually slung himself halfway through the waist-high window, rheumy eyes watering pleas for pesos. Not a great location to be sucking up sundaes. In exchange for my demonstrating how to blow paper wrappers off straws, Fernando taught me how to open a bag of potato chips without using my teeth. Were we not at the same level of maturity?

On to Alhondiga de Granaditas, formerly the massive town granary, where a young miner nicknamed El Pipila heroically made his way to the wooden door of the fortress-like structure, set it on fire and allowed the insurgents to storm the interior, the first major military victory of the War of Independence. Now a museum, it afforded us the opportunity to see mementos of great Mexican heroes, both peasant and presidential.

It’s doubtful I will ever again have the thrill of seeing such an expression as was on young Fernando’s face as he moved his hand with reverence over the smooth surface of Benito Juarez’ desk. He was touching it not only for himself, but for his absent classmates, who would soon share in this Kodak moment.

Next came the Museum of the Mummies, ghastly to me but a highlight for Fernando. There, we waited on line behind about a hundred thousand other kids. These mummies are advertised as ancient, but I hope they all got a glom at that one guy who died wearing only black nylon socks and BVDs.

We climbed to The Statue of Pipila, which can be viewed from every cranny in the city; Iglesia de la Valenciana, La Valenciana Silver Mine, Mercado Hidalgo, University of Guanajuato biblioteca, La Parroquia, Museo del Pueblo, Museo Diego Rivera, and Iglesia de la Compañia. We wandered through the parks and narrow, steep and twisty cobblestone lanes, my Nikes screaming, “You should’ve bought a larger size.”

Politely declining my offer to buy any gifts he wanted for his family, Fernando chose instead to bring back to his mother these souvenirs: a paper-encased restaurant straw, a wrapped pat of butter, and miniature soap with the hotel name on the wrapper.

Upon our return to Ajijic, Fernando’s parents, Josefina and Enrique, thanked me profusely for taking their son on the first trip anyone in their family had ever taken beyond their own village. But I know for a fact that it is I who am grateful to them. 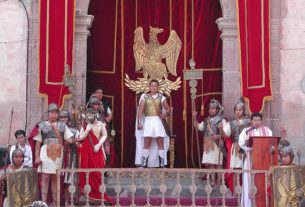 Did you know? Mexico is home to more than fifty hummingbird species