Larry Herman never expected to live this long. He made no financial provisions for old age. At 69, he and his best friend Lynda, 65, escaped subsidized senior housing in Savannah, Ga., by going back to work. They got away from wheelchairs, walkers and the sadness of people waiting to die.

Alas, they soon discovered labor wasn’t as much fun as they remembered. They were tired. They realized they could not maintain the pace.

“In January 2009 we were watching a TV commentary about living in Mexico. I said ‘How about that?’ When Lynda stopped laughing, we decided to investigate.”

Larry had a starting point. He had read the famous AARP magazine article about living at Lake Chapala for almost free. It sounded like a good retirement idea but it didn’t apply at the time. He thought he was still young.

Larry and Lynda picked up where that story left off. They read books. They asked questions on the Internet. They crunched numbers. They had never been to Mexico but they decided to try it as a way to stretch Social Security checks. They picked January 2010 as their moving target. Relatives were shocked.

Optimism and curiosity caused an itch. Maybe they would leave earlier, September or even August.

“We wanted to get to Mexico before we got old,” said Larry.

They packed suitcases and departed last July 20, Atlanta to Houston to Puerto Vallerta. It was Lynda’s first flight. They filled out forms for tourist visas.

“The answer to how much money are you carrying was easy. None.”

Customs was a snap.

“The person sitting there wasn’t interested. He must have thought that if we were smugglers, we were the most clumsy he had ever seen.”

An e-mail had reserved temporary lodging, a month in Bucerias to find a place to live.

“We rode the bus and looked at several prospective places around PV. That’s what people who live there call it — PV. We checked out Sayulita, San Pancho, La Peñita, all small fishing villages without a gringo gulch.”

There was one letdown. Larry and Lynda had expected chicken coops tied atop buses.

They selected a modest apartment in Sayulita, one block from the beach, about $500 U.S. per month, depending on the exchange rate the day you pay. A little steep, but utilities, wi-fi, beach chairs and umbrella were included.

“The jungle and the mountains run right into the Pacific. You sit there with your mouth open, thinking this is better than the pictures.”

They checked out more of the system than intended. Larry lost his wallet. Larry fell going into a restaurant, suffered cuts and bruises and shattered glasses.

Larry thought the accident might break the bank, even force their return to Georgia. It didn’t. The emergency room visit cost 130 pesos, $9.68 U.S. at the time. The eye specialist charged 200 pesos to determine there were no glass fragments in a bloody eye. New glasses cost $144 U.S.

Time on the beach was better spent. They made a study of vendors, especially those who sell jewelry, 92.5 percent silver — maybe.

“A vendor offered a man’s bracelet made of silver, copper and brass. He started out at 1,200 pesos and got down to 250 before giving up.”

“Some vendors can be aggravating. Some are very funny. Most speak a bit of English. Many have worked in the U.S. You have to keep reminding yourself that your Social Security is more than most have to raise a family.”

Larry and Lynda really like the Mexicans they have met. They “adopted” a salesman, Jorge, 20, intelligent, clean cut, hard worker.

“He spoke some English. We told him we were taking Spanish classes. He offered to teach us Spanish in exchange for English. It took us awhile to grasp the situation.”

Jorge had quit school and started selling on the beach when he was 12. His father and older brother are beach vendors. How to break the cycle and move up in the world?

“We suggested he take English classes as we were studying Spanish. He said not enough pesos. We said we would pay, then asked what he would do if he really learned English.”

Jorge’s answer hurt. He said he would move to the high-rent district, the PV beaches, to sell more and better jewelry.

Larry and Lynda have learned a lot. No 5-Minute Rice or Kellogg’s corn flakes. Buy Mexican. They really appreciate Mexican hospitality. They have improved their patience. They have not seen even one dreaded scorpion. They note the smiles when they use limited language skills to greet strangers. They are aware of heat and humidity. They have already moved to Ahuacatlan in the Sierra Madres for the summer.

“We reduced our rent by 4,500 pesos. We share a kitchen. Our Spanish is challenged. Only two American couples live here.”

After this adventure, maybe the Yucatan Peninsula and beyond if they both remain healthy. So, how are they doing it?

“On my Social Security check,” said Larry. “We save all of Lynda’s for our trips to the U.S. We are able to save some from mine. We live a good life. We want for nothing.

“One of the things we did before the move was to establish an emergency fund but we are both in good health. We would not have attempted this without a little something in reserve.”

Larry says more seniors, not especially enjoying their golden years on limited incomes, should stop twiddling their thumbs and check out the real Mexico, not the CNN version.

He hopes you don’t all come at once. That might push up prices. 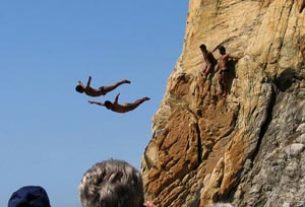 Did You Know? Mexico in the Guinness world records: part one