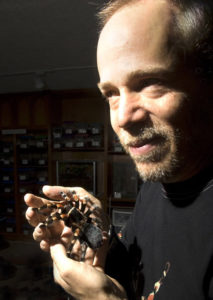 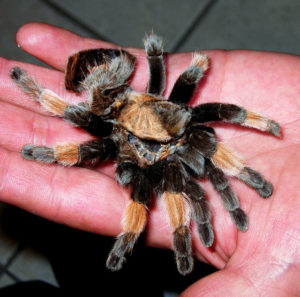 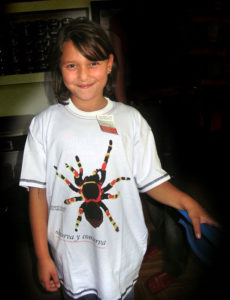 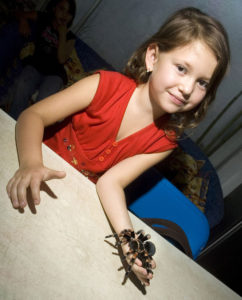 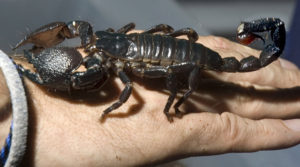 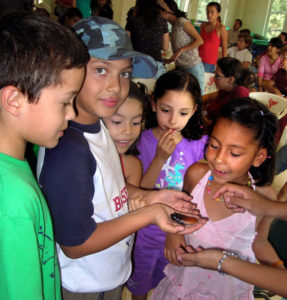 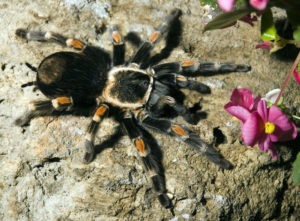 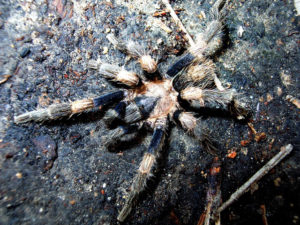 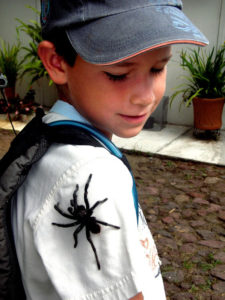 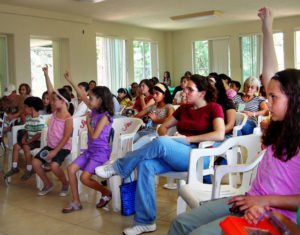 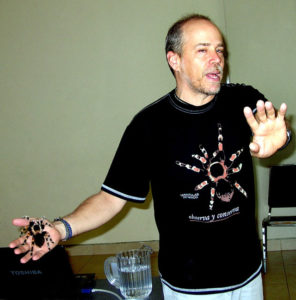 Rodrigo Orozco shares his Guadalajara, Mexico, home with thousands of tarantulas and tens of thousands of crickets. He’s a man with a mission. “I want to end the illegal trade in Mexican tarantulas,” he says. “My goal is to produce 6000 tarantulas per year and eventually flood the black market so that tarantula poaching will no longer be a lucrative business.”

Tarantulas belong to a class of invertebrates called arachnids, which have eight legs. There are around 70,000 species of arachnids, including spiders, scorpions, daddy longlegs, ticks and mites. Tarantulas, of course, are spiders, famous for being long-lived. Their bodies are completely covered with short hairs and their leg spans can reach up to twelve inches. Brazil leads the world in the number of different species and Mexico is in second place.

Tarantulas in the Americas have a dense covering of extremely fine irritating hairs at their back end. These have tiny barbs and produce a burning itch in human skin. When angered, the tarantula can turn around and shoot these nearly invisible missiles at an enemy. However, generally speaking, they are very docile and one can pick them up without fear. Mexican tarantulas — in particular the red-legged tarantula, Brachypelma smithi — are noted for their docility. They are, of course, capable of inflicting a painful bite, since their fangs can pierce human skin, and they do have venom glands, but the bites of New World tarantulas are considered non-toxic to humans and there have never been any deaths reported as a consequence.

Tarantulas have eight eyes but can only distinguish light and dark and movement. They spend most of their lives in their burrows waiting for something tasty to pass by, but males venture forth during their last year of life in search of females with whom to mate.

Like bats, tarantulas have received bad press for longer than anyone can remember. They are, after all, big, hairy and mysterious.

Along the Pacific Coast of Mexico, they are known as “mala hierba” (bad weed) and “matacaballos” (horse killers) and there are local legends that they poison whatever they step on and hypnotize their victims by licking them before they bite.

In spite of (or perhaps because of) these myths, tarantulas have become immensely popular all over the world and many, many people want to have one as a pet. Add to this the fact that tarantulas require very little maintenance and space, and it’s easy to see why there is now a huge demand for them all over the world.

Of course, there are laws against the capture of wild tarantulas and their sale, but the huge profits in this business have encouraged widespread poaching and inhuman practices. For example, Orozco mentions the case of a trafficker who wandered about with 750 tarantulas crammed into a suitcase, looking for customers. This man eventually sold a dozen of them and all the rest died.

At present, a full-grown tarantula can fetch several hundred dollars on the black market and, because Mexican tarantulas make ideal pets, thousands are illegally shipped to Germany, the USA and other corners of the world. “People don’t realize how tricky it is for tarantulas to reproduce in the wild. The poaching that’s going on will wipe them out unless something is done.”

How did Rodrigo Orozco become interested in Mexico’s tarantulas and what inspired him to try singlehandedly to save them from extinction? Here’s his story:

“My interest in tarantulas came about purely by chance. One fine day a friend came over with a beautiful Brachypelma vagans (now I know its scientific name) and asked me to take care of it while he convinced his mother that it’s harmless. Well, six years were apparently not enough to convince her, because he never came back for his tarantula. By then, I was hooked.”

Having lived for years in Acapulco, very near the jungle, Orozco eventually discovered the harm that was being done to tarantulas as a species by people collecting them in the wild for commercial purposes.

“You have to understand,” he says, “that it takes a female tarantula eight years to reach sexual maturity, if she’s lucky enough to survive that many years. Then she has to wait for a male to come along. Under the most ideal conditions (lots of males in the area) she might lay eggs six times during the next twenty years of her life, if she’s lucky enough to stay alive that long. Now, scientists calculate that only one baby out of every egg sac is likely to survive. So, under the most perfect conditions imaginable, this tarantula might produce six babies by the end of her life span of 28 years.”

In nature, of course, decades of good luck and perfect conditions are most unlikely and it could be considered a near miracle if one female tarantula ends up with one fertile daughter 28 years after her birth.

Now put the poacher into the equation. By removing large numbers of males from a given habitat, the poacher is virtually practicing genocide against the tarantulas in that area, vastly decreasing the odds that one female might be succeeded by another.

Having discovered all of this, Orozco’s reaction was to begin raising tarantulas in captivity in order to liberate them in areas frequented by poachers. “But,” he says, “I soon discovered that my own ignorance was the tarantulas’ biggest enemy.”

Long conversations with local experts Enrique Fanti and Martha Yañez convinced Orozco that his project had two great weaknesses. “First of all,” he comments, “why liberate tarantulas in a place where poachers have eliminated them? It would be like putting chickens in front of a fox; I would be aiding and abetting the trafficker by giving him more tarantulas to sell.

Secondly — and more importantly — there was the genetic problem. What was going to happen if I liberated creatures that were physically the same as those in the bush, but genetically different? I would probably end up committing an ecocide, with my tarantulas replacing the local ones because of the Law of the Survival of the Fittest. I must confess, it was hard for me to accept this concept with confreres abroad urging me to liberate my tarantulas, fully convinced that what was needed was quantity, not quality.”

Orozco eventually came to the conclusion that the only way to bring down the black market in tarantulas was to give the traffickers real competition using creatures reared in captivity. Flooding the market with legal tarantulas for sale at the same price was the only way to protect the ones living in the wild. “I had my plan, but who would help me to carry it out? I was not a biologist, after all, and many doors were slammed in my face.”

In Mexico, there exists a system by which an organization or an individual can register an animal-related project as an UMA or Unidad de Manejo para la Conservación y Aprovechamiento de la Vida Silvestre (Environmental Management Unit). In order to be certified, an UMA must conform to the norms of CITES, the Convention on International Trade in Endangered Species of Wild Fauna and Flora, to which Mexico subscribed in 1976. Unfortunately, certification does not imply financial assistance of any kind.

“I had been looking in vain for support for the UMA I had in mind,” says Orozco, “but my friend Enrique Fanti, a stubborn conservationist, kept insisting, ‘Do it on your own — Go for it!’ So I did, and to my surprise, I experienced nothing but kindness and help from the government agencies I had to deal with.

“That’s the story of how Tarantulas de México came into being in the year 2003, when my idea was accepted and turned into an UMA for the reproduction of tarantulas.

“The government people told me my idea was very innovative and that only once before had there been an attempt to reproduce tarantulas on a large scale. This took place in Michoacán when various individuals brought their tarantulas to the same piece of property, figuring that by doing so, they would soon have thousands of tarantulas. To their great surprise, however, they ended up with only a handful — and all of them remarkably fat! Unfortunately they had been given extremely bad advice on this project by people who apparently knew nothing about the behavior and cycles of these creatures.

“My project is coming along nicely and I now have more than 5,000 little mouths to feed. ‘What do they eat?’ you may ask. Well, along with reproducing tarantulas, I now also raise crickets! By trial and error and with a few tips from my friend Fanti, as well as a considerable investment on my part, I have finally managed to stabilize my cricket production and no longer have to buy crickets to feed my tarantulas. I now produce 10,000 crickets per week, just what I need to be self-sufficient.

“I frequently give talks in schools, universities, neighborhood organizations, expos, etc. demystifying what people believe about spiders and I think these presentations have had a big impact. I sincerely hope this new awareness will prevail and respect for these creatures will become something natural and basic in people’s outlook.

“When somebody is about to step on a bug and asks me whether it’s good or bad to do so, I only reply, “If you know how to make a new one, go ahead and kill it.”

Rodrigo Orozco has a website, Tarántulas de México, in both Spanish and English, where you can learn more about tarantulas and about his project in Mexico. You can help fight the poachers by clicking on “store.”