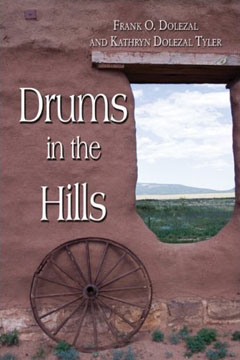 A Mexico book by by Frank O. Dolezal and Kathryn Dolezal Tyler

Frank Dolezal, fighting for Pancho Villa during the Mexican revolution, was captured by some of Venustiano Carranza’s troops, taken before a mockery of a trial, and was charged with “Treason against the legitimate government of Mexico.” With fifteen other prisoners he was taken to a clearing, offered a final cigarette, and then shot.

Miraculously he survived, rescued by Yaqui Indians who saw his leg sticking through the pile of dead bodies…the leg was slowly moving. A Yaqui medicine man cleaned Frank’s wounds and, even after gangrene had set in, restored him to health.

Frank’s son, Frank O. Dolezal, and his son’s daughter, Kathryn Dolezal Tyler, wrote this interesting adventure filled with intrigue, love, loyalty, deceit, suffering and survival, set for the most part in the early days of the Mexican revolution, much of it in and around Alamos (recent named as one of Mexico’s “pueblos mágicos“), a politically important town in northern Mexico, near the Pacific Coast.

Drums in the Hills — the title refers to the sophisticated communications system used by the Yaqui Indians — begins with young Frank leaving his native Austria to seek his fortune in Mexico. In Austria, in the military, he had been well educated, mastering several languages and learning how to handle both rifles and horses well. In Mexico City he became a partner in a clothing store.

One day a young woman, answering their ad for a job,

“entered and took possession of the room like a high-fashion model commanding the respect and awe of all whose eyes beheld her, beautiful beyond description…. Tall, with bronzed skin and penetrating dark eyes, she had the aristocratic features of breeding and privilege.”

Frank becomes obsessed with Clara, although Clara is in love with a popular young matador. When Frank, to impress Clara, takes formal training to be a matador, he is almost killed during his first public appearance, because he looks at Clara more than at the bull.

Nevertheless, after Don Antonio moves the family from Mexico City to his large estate in distant Alamos (Don Porfirio had made him “master of all the land [Yaqui land] and people around him”), Austrian-born Frank follows her there and soon finds employment as a mechanic in Las Animas Silver Mine. Despite her father’s machinations to marry Clara off to a handsome and high ranking Mexican army officer, Frank steadily works his way into her heart, “getting love letters to Clara through an Indian messenger with the blessing of her sympathetic mother.”

We also hear the stories of good doctors and of good priests, and of the long-suffering Indians, particularly the Yaqui and the Tarahumara. We discover, for example, that when a tax-collector a few years earlier was killed in Tarahumara territory, Don Porfirio sent in the Mexican army to essentially massacre the village.

“Some who survived the initial conflict tried to take refuge in an old church. When the soldiers found them they burned them alive. Over one thousand Indians were murdered to avenge the death of one tax collector.”

Pancho Villa, when he had ordered some stylish clothing at Frank’s store in Mexico City, had been impressed by Frank and later sought his help in the revolution. During this same time Frank was contacted by the German military and received a commission (now Captain Dolezal) in the German army (World War I was about to begin in Europe).

Frank’s experiences on board a German submarine, where he was studying the latest in communications, are also detailed her, although a bit of an aside from the central story.

Frank returned to Mexico and to Pancho Villa.

Fighting with Villa against Obregon, while trying to save artillery pieces in a retreat, “a barrage of bullets slammed into his legs, sheared off Frank’s kneecaps. Staggering, he fell face down in the mire. Then his mortally wounded horse collapsed on top of him.”

Recovering, disguised as a campesino, Frank limped into Mexico City to see his family; but leaving the city to return to the war, he was captured by Carranza’s troops and taken before a firing squad.

Toward the end of the Mexican Revolution, Frank crossed the border into the United States, where he found work in a meat-packing plant. “Things were going well until the workers asked for a raise. Management dealt with the problem by sending some of the workers to the border patrol to be deported as illegal aliens. Frank had the misfortune of being included in the group.”

He was turned over to United States Military Intelligence who, because of his wounds and appearance and accent, suspected he was involved in the German war efforts. As if his body had not been battered enough, at Fort Bliss he was staked out spread eagle on his back and then “A large funnel was placed in his mouth, into which guards poured buckets of water.” Further humiliation followed. He was tied to a post with his hands above his head and then he was whipped with a “cat o’ nine tails” until he fainted. When he came to he was hung up by his thumbs and left there for the long and cold January night. His torturers thought that would kill him, but Frank survived and two years later he was handed five dollars and released.

I like stories about Mexican history, and I enjoyed Drums in the Hills.