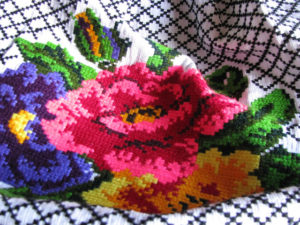 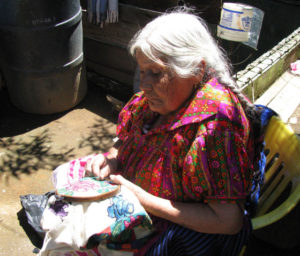 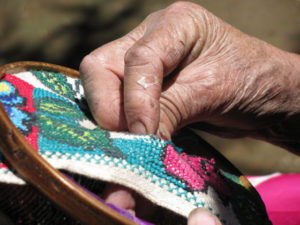 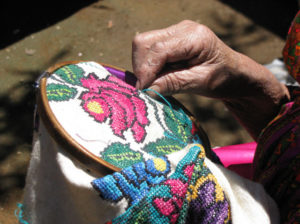 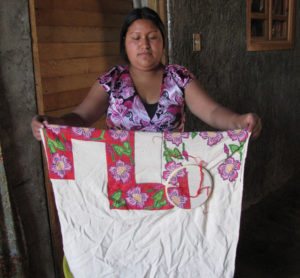 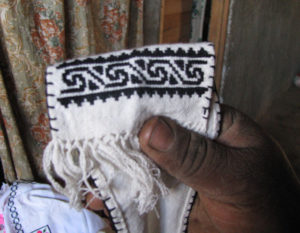 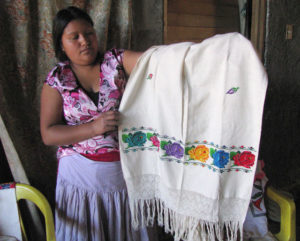 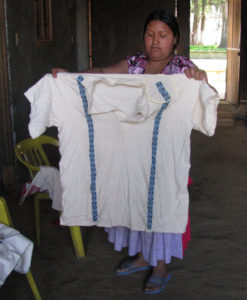 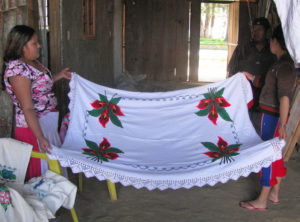 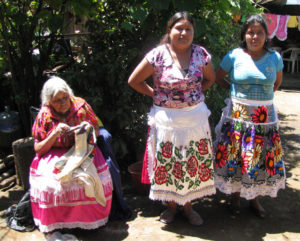 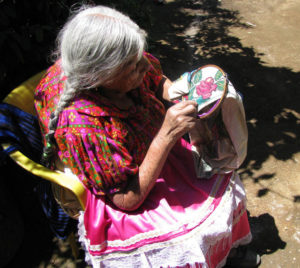 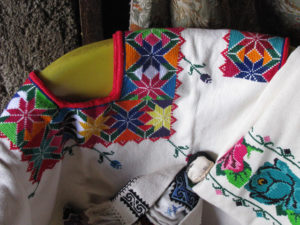 Her bold hands coax the thread through white cotton, relinquishing a fragment of the kaleidoscopic hues within her soul to cavort freely across the snowy landscape. The joints of her fingers moving with a tender dexterity, Hermelinda Reyes Ascencio pulls the filament through the fabric surrounding a needlepoint flower, radiant with shades of violet, magenta, and lavender. She looks closely at the aqua and maroon forms stirring on the empty background, the seasons of her life written in artful prose across her face.

The 84-year-old native of Cocucho, Michoacán is an expert in the region’s traditional needlecraft.

“I enjoy all of it from start to finish,” she said as she worked in her granddaughter Elena’s yard one afternoon. Artisans purchase the guanengo – a white cotton blouse – and adorn them with flowers in needlepoint (also called punto de cruz or cross stitch) around the neckline. The elderly artisan’s face occasionally broke into a placid smile as she nudged the flowers into existence as though leading a blank expanse of nothingness to the edge of a sheer cliff where it dove deliciously into exuberant color. “The flowers are the most difficult. Once I make the flowers, I can put the leaves in place. I make the flowers, and then I can fill the rest in.” She spoke with the soft consonants and pinched whispers of her native Purepecha as her grandson, Heraclio, translated her words into English.

Noted for its elegant clay pots, Cocucho has also earned a reputation for its needlepoint artisans. Arriving in Cocucho late on a Thursday morning, I went to the main square where I purchased batteries for my digital camera at a small store. A stone cross stood on the main road through town. It faced the Templo de San Bartolomé with its stone facade and scalloped parapet where loudspeakers clustered around a small-er cross on top. The road leading to Nurio swept away from the church.

A line of buildings wrapped around two sides of the plaza, enclosing raised planting areas with benches around leafy trees. The entrance to Elena’s home stood recessed against a stone wall beneath brick arches. Elena met me at the door, and I entered a wooden entry-way into a long vestibule of concrete-covered brick; a girl shouted commands from a nearby home, a muffled voice blared from a loudspeaker. Ears of corn hung from a long rope across the top of the left wall to dry before being ground into nixtamal for the up-coming Fiesta de San Bartolome in late August. Elena’s six-year-old boy, Jesus Adain, dashed about in a pair of camouflage jeans.

Elena had several projects in the midst of completion, one of them a camisa de hombre — men’s shirt — with panels of light blue and swirling black lines ending in bulbous Xs. She was also working on a guanengo with violet blooms and green stems trailing across a background of reddish orange. A needle dragging a length of thread in its wake lay impaled in mid-flight through a section of the fabric ensconced in a wooden hoop.

The greatest challenge in the craft, she said, presents itself when she forms the borders for the different panels of color. “You have to count how many lines and then you start making the flowers,” said Elena, who also makes aprons, napkins, men’s shirts, and rebozos.

She prefers making guanengos. “That’s what we’re used to making,” she explained. “I enjoy putting the colors together.”

Like many artisans, she prefers not using the same design twice. “We just make one design and then start with a new one. No two are alike, unless someone comes and asks for it.”

Elena’s brother Heraclio, a husky fellow in dusty jeans and black jersey, had now arrived at the house, taking a break from his construction job to translate the interview and explain the needlepoint technique. He even showed some drawings of designs he made for his family to transform into needlepoint. He’d learned English while living in Portland, Oregon for ten years, where he eventually worked as a line cook and earned his GED before returning to Mexico, now fluent in English as well as Spanish and Purepecha.

His grandmother, Hermelinda, soon entered the vestibule, moving with a tranquil grace in her pink lace-trimmed dress. She took a seat in the sun-drenched garden where her hands, defying the pestilence of time, awakened another piece of fabric from its slumber. The early afternoon sun skipped across the thick gray braids flowing down her back; she wore a blouse rife with an ecstatic wonder of purple and lime green panels riddled with spinning wheels bathed in lilac, yellow stars, and flame-tinted diamonds.

Typically, Heraclio explained, artisans purchase books of needlepoint designs that give the stitch count so that artisans can follow the pattern. “She makes her own designs. A lot of people can’t make their own designs, but she can. My grandmother, she started this when my mother was 18 years old.”

Hermelinda learned to do needlepoint when her daughter decided to perform in a regional dance competition. Her own mother taught her the technique, and from that singular influence Hermelinda built a family legacy that has extended to her grandchildren.

“I am happy to do this,” said his grandmother, looking up from the guanengo alive with flowers. “I feel more happy because I am the one who started this. I started making them in 1966.”

What happened next provided the impetus to pursue her skill as a livelihood. Her sister-in-law asked her to make some guanengos, then she sold them as her own in Uruapan and kept the money. Some of Hermelinda’s friends saw this and reported back to her. Apparently, the woman had even won a contest with a guanengo made by Hermelinda.

Was Hermelinda especially angry? Was there a confrontation?

“No,” Heraclio said. “She’s my grandmother. She doesn’t do like that.”

Instead, Hermelinda made more guanengos and peddled them herself in Uruapan and Guadalajara, selling sometimes 20 at a time.

Guanengos are the most popular items for her customers. One such blouse, Heraclio said, requires three or four months to complete, and she’ll only earn about $30 or $40. “People here don’t pay that much. Some American people come and pay a little bit more than people here.”

A torrent of colors

Although Hermelinda still endows her pieces with a youthful energy, the years have pre-vented her from working the way she used to. She doesn’t make rebozos anymore — the tassels, or repasejos, around the hem have become too difficult. While she used to labor eight or nine hours a day, she now works only one or two hours.

While copious flourishes of orange, mauve, violet, magenta, ocean blue and opulent green rush in torrents across the guanengos of today, they haven’t always commanded such a visual prominence.

“It was just like this,” said Heraclio, holding up a miniature rebozo with simple black key work. The more colorful designs arrived on the scene in the 1980s.

His grandmother reached into her plastic bag and pulled out wads of purple, green, and aqua thread. She selected some butterscotch that glistened in the sun, beginning another leg of her journey through a patch of flowers that danced to the melody played by her fingers across the white meadow. 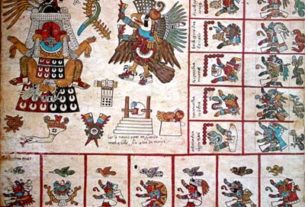