I digress from stories about the potters of Mata Ortíz, Chihuahua this month to reminisce about my first New Year in Mexico. I was 13, I was in Puerto Vallarta and the year was 1958.

“Mike, come and look.” Dad shook me awake. I squinted, bleary-eyed around the dark room. It was still the middle of the night. Then I heard a strident, off key band playing down the street and I pulled myself out of bed. My parents were at the hotel room window, looking out. Even before I joined them, I knew what was happening. They had told me about this Puerto Vallartan tradition. I squeezed between my mom and dad and peered down to the street below. . . .

We had landed in Puerto Vallarta, my parents and I, amid a cloud of red dust onto a dirt runway and disembarked into a subtropical afternoon. The airport building was little more than a concrete “shack” and the luggage was collected outside under a ramada-like structure. Our taxi ride into town bounced over a rutted road which cut a swath through scrub jungle. Near town, the road became paved, but not smooth. The surface was now the infamous Puerto Vallarta cobblestones.

This was my parents’ second trip to PV and they pointed out the sites to me – not that there were many. I do recall seeing the movie theatre. “There’s no roof,” Dad said. Later in the week, we crowded in amongst the Mexicans to watch an American movie with sub-titles. “Chief Crazy Horse.” A bad movie, but I can still remember the ridiculous ending. Ol’ CH bit the bullet and rode off in slow motion into the sky on his faithful pinto.

Sitting on the edge of what is now the famous Malecón, the Hotel Rosita was one of two hotels in town – the other the now defunct Oceano. The Rosita celebrated its 50th anniversary in 1998. It is much bigger now than when I first saw it 40 years ago. Its rooms, I imagine, still fall into the “Standard” category, but its location is impeccable and it has a pleasant ocean-side pool and patio restaurant. Like Puerto Vallarta, it has grown with the times, but still maintains a rustic charm no longer found in Acapulco and never even imagined in Cancun. My parents and I were greeted like old friends by the front desk staff and were quickly ushered to our room. My parents were old hands even then at Mexican travel and let the room be a surprise for me. It was tiny and sported two beds, a double and a single. Overhead, a single light bulb was suspended from frayed wire. Wooden shutters opened outwards to the street two or three floors below.

Mom checked out the bathroom. “Look here, Mike,” she said, fighting to suppress a grin. I approached cautiously. Knowing her, she wanted me to see a huge jungle spider lurking on the tile. Thankfully, no arachnids. There was a small shower and a clean toilet, but it was the sink that had caught her attention. It was cantilevered to the left at about a 30-degree angle, as though a longshoreman holding a large sack of coconuts had perched on the edge for a moment, until it gave way.

Like my parents, those Mexican vets, none of this bothered me – it was an adventure. They had prepared me well. The whole week was an adventure. There were no tourist shops or restaurants to speak of. In the 1950’s, one didn’t visit Puerto Vallarta looking for Gucci. Each day, we taxied across the Río Cuale to Playa de los Muertos where I passed hours in the ocean and ate delicious fish-on-a-stick for lunch. When we returned to the hotel, within minutes a huge pitcher of icy freshly squeezed limeade would appear, especially for me, the waiter would say. (One day, as we left in the morning, we saw the ice wagon arrive, pulled by two sorry mules. Huge blocks of ice were tossed off into the street, landing atop the animal poop and other mysterious brown lumps. “That’s the ice that’ll be in your limeade this afternoon,” Dad cheerfully reported.)

There was no automobile traffic to speak of along the downtown street that now fronts the Malecón. Lucky for me. Coming back from a horseback ride along the beaches near the airport one day, my horse took off at a gallop when we entered Puerto Vallarta. Guess he realized his workday was nearly over. We tore down the cobblestones, this stupid kid hanging on to the horn for dear life. (Fortunately, I had had previous experience with horses). The horse clattered and scattered the few pedestrians who all laughed and waved at the Gringuito clinging to the horse like a hungry tick.

On Christmas Eve, the three of us came down for dinner at about 9 pm. “We won’t eat until about 11,” my parents told me. “Look, they have just started putting up the Christmas decorations. They won’t serve us until they finish.”

When the meal arrived, we rushed through it to be able to attend Midnight Mass at the landmark Church of Guadalupe in the main square. We were there at midnight, but the Mass hadn’t started by 1:30 am. No priests could be found – so we left. The plaza was alive with red and green lights and a happy crowd. Two or three mechanical rides were playing to long lines.

“There’re the priests,” Dad said, pointing. We followed the outstretched finger to the ferris wheel, which was spinning at rpms never allowed in our country. Our astronauts would have been impressed – if we had had any at the time. I focussed on the spinning contraption. Two of the passengers were priests, arms a-flutter, cassocks waving. Guess they felt nearer to God on that wheel than in the church. Mass could wait, they were having too much fun.

After Christmas, we settled into the “routine” of swimming, fishing, riding and exploring while we waited for New Year’s Eve. I don’t remember much about the evening itself. I’m sure we ate another late dinner and brought in the New Year in the square. By 2 am, with the fiesta still flying, we went home to bed. Until Dad woke me at 4 am.

The only sounds outside now were those of the band. It seemed each member was taking a road less traveled. The bellowing trumpet shifted between flats and sharps; the guitars forked in different directions, apparently playing one or two strings short of a full fret. It was a maze of sound and the singers struggled to follow the correct path.

The subjects of all this effort were three non-musicians who were also struggling-to maintain their balance. In those days, that front street didn’t house shops with over-priced jewelry and name brand clothes. The adobe and cement structures were the houses of the local fishermen and longshoremen. The band was playing them home – a community service of sorts.

A door opened, emitting a soft stream of light, from one of the houses. The group teetered to a halt and one of the non-players was dispatched inside. Moving on down the street, a second borrachero broke away for the comfort of his bed, blissfully unaware of the hangover to greet him later in the day. With one “passenger” left to guide to safety, the band tacked back and forth beneath us and disappeared into the darkness, the music finally fading to a memory.

We pulled ourselves back inside and looked at each other, my father, my mother and me. They grinned like Cheshire cats, so pleased to have presented me this first experience in a foreign land. “That’s New Year’s in Mexico,” Charles Hubert Eli Williams said.

Ahh! Those were the days. 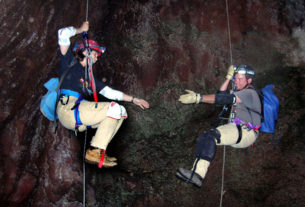 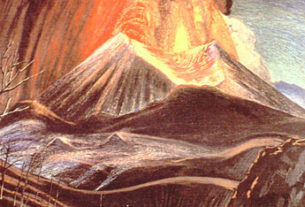 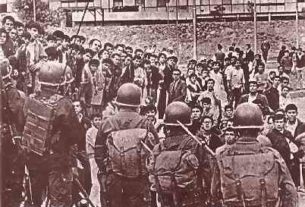 September 14, Day of the Charro

Pennies from heaven: in memory of my friend Dona