On TV we saw a “Pinyada” I have no idea of the spelling. It was a stuffed shape (rather large) filled with sweets that you hang up and hit till it breaks and the sweets fall out. I have heard this is Mexican? My 6-year-old son thinks it is lovely – can anyone help on how to make such a “Pinyada.”

In Mexico, traditional ones are/were made with a sun-dried clay pot covered with papier-mache and decorative paper. These break open well with a solid hit. “Safety concerns” have made the importation of thousands of these to the U.S. change the construction to cardboard and paper. While “safer” maybe, the cardboard requires a lot of beating before it will burst open and spill the candy, peanuts, sugar cane etc. You can make one yourself with wire and papier mache by blowing up a balloon and covering it with the wet papier mache (the wire is to hang it with). When dry, pop the balloon and fill with candy. Use your imagination, the shape can be anything you want. A cardboard box covered with tissue paper will also work. These are traditional for the Posadas (fiestas held during the 12 days of Christmas) but have now become popular at birthday parties as well. Stretch a rope across the yard or patio from 2 high places and hang the pi ñata from the center. Have an adult at one end of the rope to jerk i t around. The children take turns, starting with the smallest. Blindfold the child and turn him or her around 3 times before they start swinging with the stick. Everyone shouts encouragement and clues as to where to swing. After a few tries with no success, move on to the next largest child and so on until one manages to break it and spill the candy. Then all the children scramble for the candy.

Only put part of the candy in the pinata and put the rest in an appropriate number of bags to give to all of the children after the pinata is broken. If not, most of the candy gets scarfed up by the larger and faster children at the party. It’s the way it’s done at parties in Mexico that I have been to and seems to work well. john

I’m a teacher. One of the books we use is a bilingual story entitled “The Pinata Maker.” It tells the story of one old man’s life and has good pictures and an explanation of how he works. My 4th graders love to do this.

Hi,
Here is my personal method for making a pinata. Allow about a week for it to dry.

Making the piñata: Give yourself a tabletop work area and protect it with newspapers.

Materials: Balloon =medium size, plastic bucket or bowl. Cut a pile of long thin (1″) paper strips, newspaper or newsprint. Glue – start with 1/2 cup of white flour in a wide bowl and slowly mix cold water, until you get a thin paste free of lumps. Place the balloon, in the bucket to hold it steady so you can work around it. Moisten each strand of paper in the paste and smooth off the excess. Lay each strip on the balloon’s surface until you cannot see a speck of the balloon’s color. Remember to up-end the balloon to do the underside. Then do a second layer.

If you are going to use crepe paper to cover, you can put it on now as a thin third layer. If you can think ahead to the hanging and bashing of the piñata, it is better to maché at least three strings under the crepe paper layer for hanging later. If not you can always try tying it up later. But some of our piñatas broke free of their outside string harnesses and flew across the room – much to everyone’s amusement! This gives you the basic “EGG” piñata. If you wish it fancier then you will need to maché on pieces of cardboard or squashed newspaper during the first stage. Use your imagination for ears, lips, legs etc., to make fish, birds, animals, cars, fruits etc.

But just this basic EGG transforms well into Santa’s, Pumpkins, People, and Christmas Ornaments…The first stage of drying takes approximately two days. Rotate the balloon in the bucket so the underside dries as well. Important Tip: Then give the piñata a small slit with a sharp knife near the bump where the balloon is tied, popping the balloon which will shrivel up inside. This is naturally the weakest point. Make a small cross-cut and insert 1-2 lbs. of wrapped candy. Then paper-maché over the cut and let it dry for at least another day. Paint or decorate it after drying. Traditionally covering it with a final layer of crepe paper is easy, inexpensive and colorful. This process takes about a week or five days at the least.

WARNING: If made in less time, the interior will still be wet and moisten the candy. UGH! This happened to a friend of mine and a big party of children.

Now the hanging! Good-luck. Buena Suerte! If you need any more information, just ask. For articles on the history and tradition of piñatas try typing “pi ñata making” into the search engine at this site on the main page. Sincerely, Wendy

Al and Joe are bungee jumping one day. Al says to Joe, “you know, we could make a lot of money running our own bungee jumping service in Mexico.” Joe thinks this is a great idea, so they pool their money and buy everything they’ll need: a tower, an elastic cord, insurance, etc. They travel to Mexico and begin to set up on the square. As they are constructing the tower a crowd begins to assemble. Slowly, more and more people gather to watch them work. When they had finished, there was such a crowd they thought it would be a good idea to give a demonstration. So Al jumps. He bounces at the end of the cord, but when he comes back up, Joe notices that he has a few cuts and scratches. Unfortunately, Joe isn’t able to catch him, and he falls again, bounces again and comes back up again. This time he is bruised and bleeding. Again Joe misses him. Al falls again and bounces back up. This time he comes back pretty messed up. He’s got a couple of broken bones and is almost unconscious. Luckily, Joe catches him this time and says, “What happened? Was the cord too long?” Barely able to speak, Al gasps, “No, the bungee cord was fine. It was the crowd… WHAT THE HECK IS A PIÑATA?” John 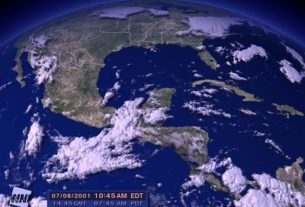 The Mexican climate: A thumbnail guide