Probably the individual in history who most resembled Agustin de Iturbide was Charles Maurice de Talleyrand-Périgord, the French statesman who managed to hold high positions in the pre-revolutionary ancien regime, the revolutionary government, the court of Napoleon, the restored Bourbon dynasty and the bourgeois monarchy of “Citizen King” Louis Philippe. Talleyrand, who made opportunism into a guiding principle, was the human equivalent of the cat who always lands on his feet. Iturbide, by the same token, not only managed to fight on both sides during Mexico’s War of Independence but ended up successfully hijacking the independence movement and turning it into an instrument of imperial ambition.

Yet there were significant differences between the two men. Talleyrand was a cleric — though a remarkably worldly one — and at the time the revolution broke out he was bishop of Autun. Iturbide, on the other hand, was a career soldier and his civil career didn’t begin until he installed himself as head of state. They also met different ends. Talleyrand died in bed at age 84, full of riches and honors. Iturbide perished violently at age 41, a victim of ill-advised ambition.

Iturbide was born in Valladolid (today Morelia) in 1783, the son of a Spanish father and a Mexican mother. His opportunism can be traced back to the crib. Though Iturbide claimed his entire life that his mother was a creole (Mexican-born but of pure Spanish descent), the rumor persisted that she had Indian blood. In those days racial distinctions were important. At the top were 40,000 Spaniards, mainly soldiers and civil servants. On the next rung of the ladder were a million creoles, born in Mexico but of pure European descent. Below the creoles were 1,500,000 mestizos (mixed bloods) and at the bottom 3,500,000 pure Indians. In both the civil and the military arm, race was taken into account when determining advancement.

Successfully passing as a creole, Iturbide was commissioned in the army while still in his teens. Though valiant in combat, his reputation was none too good in other areas. As a young officer he was noted for fleecing contractors who supplied the army and then spending his ill-gotten gains on gambling and women.

When the Independence War broke out, Iturbide was 27. He joined the rebel forces of Father Miguel Hidalgo and Ignacio Allende but his vanity and ambition would soon cause problems. When Hidalgo refused to give him a top command, Iturbide sulkily withdrew from the insurgent movement.

By 1812 both Hidalgo and Allende had been captured and executed. Leadership of the rebellion passed on to another priest, Father José Morelos y Pavón. Morelos, like Iturbide, was from Valladolid and the city’s present name, Morelia, was selected in his honor.

Morelos had gone into rebellion in 1811 and put himself at the head of a band of skilled guerrilla fighters. Morelista forces captured Oaxaca in 1812 and in 1813 Morelos convoked a congress in Chilpancingo, Guerrero. The manifesto issued by the congress, radical for its day, advocated abolition of slavery, breaking up monopolies, imposition of an income tax and deportation of all Spaniards from Mexico. Morelos then assembled an army of 5,600 and marched on Valladolid, his native city.

Leading the city’s defenders was none other than Iturbide. The radical Chilpancingo manifesto had disturbed many conservative creoles, including Iturbide, and they went over to the Spanish side. Ever the skillful tactician, Iturbide routed Morelos’s forces with a well-executed cavalry charge and broke the siege of Valladolid. The shattered morelista forces withdrew into the wilderness but Morelos was captured by a Spanish patrol in 1815. Taken to Mexico City, he was defrocked by the Church and executed in December of that year.

Then — in one of these remarkable twists that truly makes history stranger than fiction — Spain, the great oppressor, suddenly turned liberal! A group of officers staged a coup in 1820 and forced the reactionary King Ferdinand VII to accept a democratic constitution.

The conservative pro-Spanish faction in Mexico, one that included Iturbide, was in a quandary. Detesting the new liberal regime in Spain, they planned to shift authority over Mexico from the Madrid government to the Council of the Indies, a traditional body of priests and lawyers that had been in business since the Conquest. In the meantime the rebellion, dormant since the death of Morelos, had come back to life under Vicente Guerrero. Iturbide, now in the capital, was promoted to brigadier general and sent to command an expedition against Guerrero.

It was then that the chameleon again changed color. Defeated in an initial engagement by Guerrero, Iturbide entered into negotiations with him. He would go over to the rebels if Guerrero would accept three guarantees: Mexico would become independent; distinctions between creoles, mestizos and Indians would be abolished; Catholicism would be the state religion. Guerrero accepted the conditions and their joint forces became known as the Trigarante army — the army of the Three Guarantees.

With this, the Independence War ended and Mexico became a sovereign state. But not a republic. Using his military power as a political weapon, he crowned himself Emperor Agustin I of Mexico on July 21, 1822. As emperor, Iturbide held sway over one of the vastest territories ever under the rule of one man, an area that ranged from Oregon to Panama and included what are today the states of California, Texas, Arizona and New Mexico.

The imperium of Agustin I proved to be short-lived. His former enemy-turned-ally, Vicente Guerrero, turned enemy again and joined with another ambitious officer who possessed a chameleon-like ability to subjugate ideology to ambition. This officer, Antonio López de Santa Anna, would later eclipse even Iturbide as Mexican history’s most outrageous adventurer.

Guerrero and Santa Anna forced Iturbide to abdicate on March 19, 1823. In May he sailed into exile with Italy as his destination. He later moved to London.

But he wouldn’t leave well enough alone. Having been informed of a Spanish plot to retake Mexico, he foolishly listened to advisers who told him that he would be hailed as a liberator and potential leader against the Spanish invasion if he returned to Mexico. Landing at Soto de Marina, a small village near Tampico, on July 19, 1824, he was seized by a military patrol. Local authorities decreed his execution and he was shot on the same day. Later, in a measure of partial rehabilitation, his remains were transported to a place of honor in Mexico City’s great cathedral. 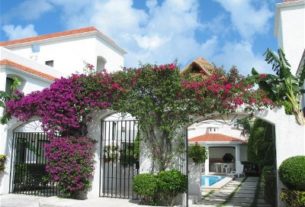