To Part One Mesoamerican epic poetry and saga: What is epic?

To Part One Mesoamerican epic poetry and saga: A survey

In previous articles we looked at the remnants of texts in Nahuatl (Classical Aztec), which, according to the Mexican scholars A. Garibay and Leon-Portilla, have all the characteristics of the epic poetry and saga common in many parts of the world throughout recorded history. Critics emphasize the differences between the Nahuatl texts and other acknowledged world epics, such as the Homeric Iliad and Odyssey. Further, they claim that the Mexican scholars purposely edited and translated the Aztec material in such a way that they in fact created a false impression of those historical records that — according to Garibay and Leon-Portilla — supposedly survived the Spanish Conquest of Mexico in 1521 in more or less pristine form.

Garibay and Leon-Portilla based their alleged myopic “vision” of ancient Aztec civilization on their interpretation of the key phrase in xochitl in cuicatl (the flower, the song = poetry). According to this viewpoint, the Aztecs formed a highly civilized society with poet-kings busily engaged in learned philosophical discussions. Unfortunately, the general public hears mostly about the Aztec practice of tearing out human hearts. The misunderstanding and misinterpretation are further exacerbated by the virulence of the “discussion” between critics and supporters of the Garibay/Leon-Portilla interpretation. Complete objectivity may be unobtainable, but at least the researcher or writer can endeavour to give both side of the question equal importance and let the readers decide for themselves. However, researchers are only human and academic politics unfortunately play a role in the on-going debate. There are exceptions, of course, but too often each new generation of scholars feels that they must contradict or at least revise what the older one said in order to make a name for themselves and thus obtain more grants — or at least tenure and job security.

One way to deal with such problems is through comparative studies, which at least widen the perspective for all those involved in the debate. Obviously, there will always be differences of opinion, especially when we compare different societies or cultures separated one from another by wide spans of time and space, for example pre-Conquest Aztec society and ancient Greece. Nevertheless, in comparative studies of this sort we can at least look for the universal elements while taking into account the particular or unique cultural features.

One initial problem with the Mesoamerican material is the written form of the documents that Garibary and Leon-Portilla claim contain remnants of a strong oral epic tradition in ancient Mexico.

Prior to the Conquest, written documents in Roman transcription did not exist. The Aztecs handed down history and customs through an oral tradition backed up by codices — the “painted books” of ancient Mexico. It is true that the Aztecs did have a form of writing based on a combination of commonly recognized symbols (the Maya had an even more advanced form of phonetic symbolism). Nevertheless, written documents do imply a post-Conquest period of composition. This, in turn, raises the question of Spanish missionary influence on these apparently “native” compositions and consequently calls into question the “authenticity” of those texts that were written down after the Conquest.

Even critics of the Garibay/Leon-Portilla interpretation of these Nahuatl texts acknowledge that they contain at least “vestiges” of pre-Hispanic modes of thought and expression. However, there is no consensus on the authorship of these compositions in the Nahuatl song-poems found, for example, in the Cantares Mexicanos collection. J. Bierhorst believes they were composed after the Conquest by survivors or their immediate descendants longing for the “good old days.” Leon-Portilla remains convinced that the song-poems were composed by historical poet-kings prior to the Conquest. The “truth” — if it can be had — is somewhere in the middle.

Part of the argument rests on the definition of epic poetry and saga. Terms like “epic” and “classic” are so bandied about today that few people are even aware of the original meaning. An “epic” movie or a “classic” novel is not an epic poem or saga. However, not even scholars of this genre of literature can agree entirely on a basic definition. Some argue that an epic must contain a sustained narrative featuring a central heroic figure; others maintain that long shamanistic poems also qualify. Another common classification distinguishes between Primary Epics, composed and transmitted through oral tradition, and Secondary Epics, written down from the outset. The definition of “epic” can be reasonably expanded to include both heroic and shamanistic themes in both written and oral form, as the vast Tibetan Kesar of Ling epic cycle clearly shows. On these grounds, there is no good reason to exclude the admittedly fragmented “epic” passages in the Anales de Cuauhtitlan (Ms. of 1558) or the Historia Tolteca-Chichimeca, to name only a few Nahuatl sources, from the discussion about epic poetry and saga. Indeed, the Crónica Mexicayotl is an epic saga of truly heroic proportions.

The forms of epic poetry and saga range from the strict dactylic hexameter of Homeric epic to the looser sloka metre of the Indian epic to the semantic couplets of the Quiche Maya Popol Vuh and the “difrasismo” style of poetical Nahuatl prose in which two terms give a third distinct but related meaning. Even the predominantly prose form of the Nahuatl texts does not disqualify them from inclusion in the category of epic poetry and saga. The early Irish sagas of the Ulster Cycle, which are in prose interspersed with metrical verse forms, are by any definition genuine heroic epics. Even the vast Indian epic, the Mahabharata, which is predominantly in verse, contains extensive prose portions. In form and content, therefore, parallels to the Mesoamerican material can be found in other world-wide epic traditions. The comparative approach enables us to see more clearly both the similarities and the differences in this genre of oral or written literature.

The content of Mesoamerican epic poetry and saga will, of course, differ significantly in some regards from that of Indo-European or Asiatic epic traditions because of numerous cultural differences. For example, as I indicated in a previous article, the theme of the cattle raid, so predominant in Greek, Indian (Sanskrit), and Old Irish epic tradition, is not found in Nahuatl and Maya texts simply because there were no cattle in ancient Mexico. Many other specific cultural features in the general fields of Indo-European, Non-Indo-European, and Mesoamerican epic traditions could be pointed out.

A common theme in almost all epics is that of a Heroic Age somewhere in the background. Here the story of the Aztec migration from Aztlan to the founding of Mexico-Tenochtitlan and the story of the eagle on the cactus is certainly worthy of comparison with the Heroic Age themes of Homeric epic, Indian (Sanskrit) epic, and the Old Irish sagas. Migration themes are common in epic poetry and saga, for example the heroic ocean voyages of the Maori in search of Ao-te-aroa (the Land of the White Cloud), New Zealand.

Under certain circumstances, even very long narratives in both prose and verse can not only be composed orally but also preserved almost verbatim over a long period of time. The collection of ancient Indo-European hymns known collectively as the Rig Veda was preserved in India for generations by Brahmanical families, syllable by syllable. Even without metrical restraints, even long prose texts can be preserved in a predominantly oral society. In traditional Gaelic-speaking Scotland, professional bards and story-tellers both composed and transmitted poems and Fenian tales almost verbatim. While improvisation was involved, the emphasis was on the accurate public performance of a poem or a traditional narrative. If a story-teller made a mistake or missed something in the performance, the well-informed audience would let him know. From all we know about ancient Mexico, the Aztec priests and scribes were certainly capable of similar feats of memory. Literacy kills memory.

In this line of research, the use of analogy to help bridge gaps in our knowledge of epic texts between the oral and the written tradition may prove useful when other concrete evidence is not available, for example in the composition and transmission of Homeric epic. Like most comparative studies of this nature, sometimes more questions are raised than answered. However, this does not mean that we should not make the attempt. At stake is the reliability of certain historical records upon which we base our interpretation of pre-Hispanic modes of thought and action. However, arguments from analogy do not necessarily constitute proof. But by comparing other epic poems and sagas world-wide with the Mesoamerican material, we can suggest plausible ways in which the Nahuatl song-poems, for example, could have been composed and handed on by word of mouth prior to the Conquest until finally fixed in writing under the auspices of the Franciscan missionary teachers.

Much work remains to be done. Nevertheless, the comparative approach helps to vindicate the work of Garibay and Leon-Portilla by placing Mesoamerican epic poetry and saga in the wider context of established world-wide epic traditions. While there are significant differences the similarities should not be underestimated. 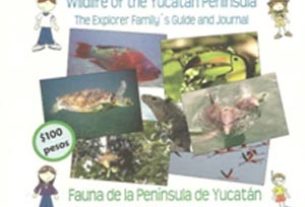 Wildlife of the Yucatan Peninsula: The Explorer Family’s Guide and Journal