This page is number 1 of seven pages on MexConnect which come originally from the website of CEDEX (Center for Historic Studies of Public Works and Town Planning) in Madrid, Spain. (Links to the other six pages are provided at the end of the article). The pages reflect an exhibition organized by CEDEX in 1988, entitled “Manila 1571–1898, The West in East”.

Spain organized the”Indies run” from the port of Seville. This comprised a network of communications that for the first time acquired planetary dimensions; it meant that every year the thousands of kilometres separating the Philippines from Europe would be covered by shipping routes.

In the early decades of the 16th century, the sailing routes operating between Seville and America were covered by single vessels. As from 1526, the “Casa de Contratación” decreed that all vessels should leave in fleets rather than on an individual basis.

“The Fleet” had a single trading route to the Antilles. Later, it was divided into two convoys which had different destinations: the Antilles and the coasts of the Caribbean and Vera Cruz. On their return trip, the galleons were to be found anchored in the port of Havana before sailing back to Seville.

Around 1576, the Pacific route linking Acapulco with Manila was established. The galleon trip, which involved 30,000 kilometres on the outward voyage and the same distance on the return trip, practically encircled the globe.

In 1717, Cádiz replaced Seville as the principal port city, but monopoly of port installations and trading facilities continued. In 1778 the Free Trade Regulations came into effect and permitted trading with other ports, and in 1789 the fleets system disappeared.

A new structure for the merchant navy was created, and this worked on the basis of consulates and maritime companies, including the Philippines Trading Company. In 1815, the Manila galleon run closed down, and in 1869 the Suez Canal was opened. Other routes were established and the different worlds became united through different sea routes.

During the 16th century, the light caravels used on voyages of discovery and the first ocean-going vessels stepped aside to make way for ships with larger capacity and tonnage such as the robust galleons that plied the Indies run..

Overseas trading called for the development of solid, stable ships able to withstand the heavy ocean swell, well equipped with sails and capable of carrying a large amount of dead weight such as artillery, provisions and merchandise.

(Below) View of Veracruz, an arrival and departure enclave for merchandise and passengers, with its castle and the quayside for small-tonnage vessels that was built on the bay, drawn according to the manuscript written by its author during the reign of Philip III.

The Derrotero de los pilotos Jaymes Martinez y Diego Martín del Viage… 1565. AGI is  a nautical map or book of sea routes and courses used in the 16th century which contains drawings of the islands of Barbados and Ladrones, as well as showing the voyage to the Philippines undertaken by Miguel López de Legazpi.

The “Carta universal” drawn up by Juan de la Cosa, grand master and owner of the Santa María, is the oldest cartographic work preserved showing the American continent. It represents the geographical knowledge of the era, and includes the discoveries of Columbus, Ojeda, Vicente Yáñez Pinzón, and John and Sebastian Caboto.

Map of the sea routes used during the 17th century, according to Pierre Chaunu.

Map of the sea routes used after the middle of the 16h century, according to Céspedes del Castillo.

Map of the principal sea routes used during the first third of the 16th century, according to Céspedes del Castillo

The route of the Victoria ship, according to José Luis Morales. MN.This vessel was used by Magellan for the voyage which set out from Seville in 1519 and which was to lead him to discover the strait that bears his name, and then on to discover the Philippines.

The other pages from the CEDEX exhbition on our site are:

History of Oaxaca: The Pre-hispanic Era 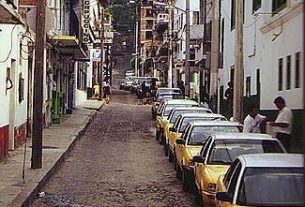 The Crossing by Cormac McCarthy