Photo Gallery: Hammering out a future for young people in Chapala, Mexico 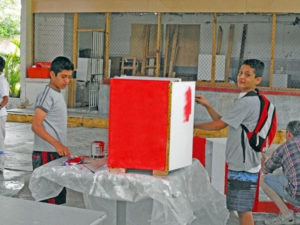 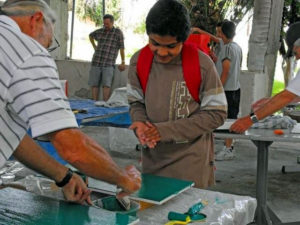 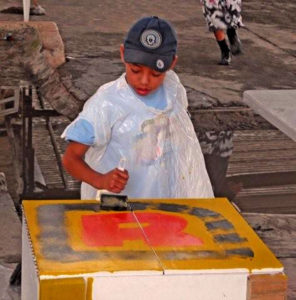 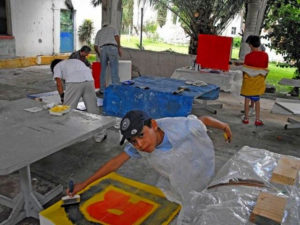 The men and women in the Chapala-Ajijic area whom I admire the most are those who can give so generously of their time to help others (without expecting anything in return), and Lakeside seems to be overrun with them.

One such humanitarian organization (it is, I believe, truly humanitarian in the same league as those on billion dollar budgets) is “Have Hammers… Will Travel.” (Okay, so it’s not the most original name, but it’s certainly true to its original TV namesake, Have Gun, Will Travel — featuring the selfless law enforcer who would go anywhere to help people.)

Have Hammers…Will Travel is a traveling “machine shop” like the one we all remember from high school, which sets up tent in specific locales in the Lakeside area, and invites boys and girls between the ages of 8 and 14 to learn about carpentry, woodworking and the general use of common hand and electrical tools. The children’s instructors are all volunteers, chiefly retirees from all over the globe who have come to live here at Lakeside.

“Have Hammers” is the brainchild of Richard (Ricardo) Williams. Richard doesn’t wear a snazzy black western outfit like Paladin from Have Gun, Will Travel, but he certainly has the courage and commitment to get out there and bring his and his associates’ expertise to bear. They teach interested kids a valuable craft, a craft, by the way, the children have come to associate with one of the holiest of men.

The project works this way:

For a period of two hours once a week, children who enroll are instructed by volunteers on how to use carpentry tools and learn the carpentry craft. The classes are run on a continuing basis. Each class starts with healthy snacks and juice. And each child gets hands-on training and supervision from a group of over half-a-dozen instructor/volunteers.

Richard even has a translator named Alfredo Rico, who is also a classroom instructor and the group’s website coordinator. Once the children become familiar with tool usage, actual projects are set up, so that each child becomes the proud manufacturer of a carpentry product. These range from clever and colorful birdhouses to handsome bookends to hat racks and more. In fact, the Lake Chapala Society has already commissioned HHWT to construct 50 bookends for its renowned Neil James library.) Finally, at the end of every class, the children are free for 15 minutes to use the tools and supplies to create their own projects.

Children are notified through their schools of the opportunity to enroll. The first class is free (offered as an introduction), and after that, the cost is 50 pesos per month for each child. Classes are limited to 16 students. Parental permission is required in writing.

Rick’s original pilot project took place 17 months ago at Misión San Pablo, a Catholic orphanage for boys located in Cedros. The program was such a success that it has been expanded to several additional areas at Lakeside, namely Hope House in Ixtlahuacan, and most recently, two new programs at the Lake Chapala Society, one on Monday mornings and another on Friday afternoons, to coincide with the two half-day school periods, morning and afternoon.

One of the biggest boosts Richard and his colleagues had received for this effort were the contributions — in the form of tools and time — made by a local expatriate New Yorker, Joe Schwartz, who’d lived in Ajijic some 25 years. Familiar with carpentry and construction, Joe had seen an article about Richard’s new endeavor and offered to loan tools to help get the original workshop started. Eventually, he donated all the loaned tools and even went to Texas garage sales to buy as many tools as he could find and donated them as well. In honor of Joe’s generous contributions and the fact that Joe recently passed on, the Have Hammers, Will Travel workshops have been named “The Joe Schwartz Memorial Workshops.”

As with all volunteer projects, additional volunteers are always needed and welcome.

An immediate need right now is for several workbenches or doors that can be used as workbenches. Hand tools and materials such as drill bits, jig saw blades, safety glasses and anything a carpenter can make good use of are also welcome. Since the project now has three locations with 60 kids in four workshops, another critical need would be a small pickup or van to transport tools and materials to the workshops. Richard’s tail-dragging Nissan sedan is apparently not big enough to handle the load!

But the most vital contributions at this time would be the small donations that would sponsor a young boy or girl — only 50 pesos a month or 600 pesos for a full year of training. It’s a small sum that could amount to providing an avid participant with a full-time career after they finish their elementary schooling.

By all accounts, this may be one of the worthiest projects at Lakeside. You can obtain further information by contacting Richard Williams at [email protected].

Tequila, Lemon and Salt: From Baja – Tales of Love, Faith and Magic by Daniel Reveles