In July, I wrote about racism and how this affects business in Mexico. The article provoked a huge reaction. I got love mail and hate mail. This month I’ll share some of the most thoughtful responses with you.

One writer wrote to say:

Who spoon-fed you this garbage?

Some of the most successful and wealthy people in Mexico are not white, but tan looking “moreno. ” In Mexican novelas, there are many females who are tanned, and not white. As for most Mexicans, we do take an interest in our fellow countrymen.

For being a professor you have a rather narrow and uneducated view of Mexico.

Generalizations are rarely ever correct.

I found your experiences and perspective on latent “racism” that exists in Mexico quite interesting. I am actually considering relocating to Mexico and starting a personal business. I’m of Asian descent mostly, with a little Irish, and I didn’t quite detect the feeling of racism during my recent visit to Veracruz and Xalapa. Among the locals, I was actually surprised that no one really gave me strange looks, and the only one acknowledgment that I did receive was a reference to being a Norteamericano Chino, and he was asking if I needed pesos in exchange for dollars. However, what was interesting was I did not even say a word to him in Spanish, or English for that matter, and he presumed that I was from the States or perhaps from Asia.

However, I do agree with your points about the entertainment in Mexico in which Caucasian actors play the main roles. I do notice that the protagonists in the story lines are usually fair or light-skinned. The racism is subtle, but I think it’s people’s perception of an ideal view of beauty and social acceptability. I have a friend who lives there and is morena (dark complected). She pointed out this fact as it were a negative aspect, which I would never have thought, being an open-minded and liberal Norteamericano who has interacted with people from different cultures and backgrounds.

Perhaps the most balanced and insightful point of view comes from Francisco Pelaez, who holds the copyright to the following essay. I believe he deserves to be read in full.

Although I agree with your overall perception that racism may be found alive and well in my native Mexico, I feel inclined to share with you some thoughts that suggest other, perhaps more complex issues at work here.

Regarding soap operas in Mexico, what seems to me your implicit assertion that they are evidence of racism is lacking, I think, some necessary breadth of understanding “the human condition” that would broaden the possibilities for interpretation, and place these TV dramas in a context that yields more meaning and greater insights.

Another perspective to telenovelas is that they are enjoyed by many, if not all viewers, regardless of race, or blend of races, for that matter. If we agree on perceiving these shows as implicitly and sometimes even explicitly racist, could that be interpreted as a symptom of the (latent or manifested) racism in all TV viewers? Probably; but then, seen this way, racism approaches its all too human (Mexican in this case) nature, rather than being judged as a perverse characteristic of a particular group. So long as there are races, by arbitrary definition, it seems to me, there will be racism, not only in Mexico, but everywhere that race is distinctive and so labeled.

Here, if I may, I’d like to allude to a possible association with another aspect of life in my Mexico: the way people look at what they lack, and how to redress that situation, may also explain why anti-corruption campaigns there, and elsewhere in Latin America, progress extremely slowly, if at all. Fear of those in power slows down attempts to get rid of corruption, it’s true. But there’s also the dream of ascending in status, of being privileged with as much ease as those who have succeeded through corruption. So, the mere possibility of one day having that same opportunity silences the criticism of many; the time may come when they may find themselves doing the same. That expectation of “what if I were on top?” seems to cross all ethnic gradations and skin colors in my country, whose large majority is European-aborigine mestizo, while probably its most important minorities are those who have remained criollo (European, born in America), or at least portray themselves as such, and a smaller number (single digit percentile of the population, last I heard), that is indigenous.

In interpreting the discrimination by the “Caucasians” that you describe, I would also consider the possibility that it may be perpetrated (and then perpetuated) with the help of those at the receiving end of the discrimination. Understandably, the discriminated-against may be aspiring, perhaps not consciously, to be among those doing the discriminating. By the same token, the victims of corruption seem to be waiting, silently, in latent mode, for “their turn.” For example, while a few in every administration fill their pockets with money from bribes and other favors, others seem to be waiting for their luck to turn and place them among those making the big, quick buck, enabling their dreams to come true. In this way, corruption seems not only to be tolerated, but pardoned and even justified.

Overall, to discriminate is human. Yes, it’s sometimes called the Elite Club or the Platinum Card, but the exclusivity we all look for carries with it an inevitable discrimination. This is not difficult to understand, and we all, in one way or the other, foster its existence. What I believe is and should be the subject of criticism and even punishment is to take away freedom or human rights from others in the name of that search for exclusivity and its enjoyment; in this world, racism has been taken to those extremes. Of those discriminatory practices you touched on, I would assert that all can be overcome with money or power. (And think how hard it is to distinguish between the two.) With time, money can change anybody’s looks, thereby avoiding such discrimination, right?

I conclude that what you have described as racism is true only in part – the human part. Regarding the Mexican part, the way those with dark skin and unstylish clothes are treated, the way we treat one another, has multiplied and often combined explanations, not all of them necessarily related to race. More likely, we behave in accordance with hundreds of years of influences, transformation, and the blending of blood, power, poverty and politics, locally and beyond Mexico’s borders.

As with any other country’s, Mexico’s spectrum of attitudes about race and appearance is too wide to explore in this commentary. But politics tend to reveal the aspirations of a society, and may serve as a useful example when describing and criticizing life in Mexico. In the history of Mexican politics, one finds that the ethnic features of figures of power reveal no consistent or deep-set racial policy. BenitoJuarez, for example, with distinctive aboriginal features and background, and the Austrian-born Maximilian of Hapsburg, directly imported by Napoleon III, were in charge of back-to-back governments in the mid-19th century. Or consider Porfirio Diaz, the dictator who ran the country for all but four years, between 1876 and 1911. The son of Oaxaca aborigines, he was defeated by a mestizo revolutionary movement. The above exemplify a dynamic much more complex than the clearly racist slavery that was spelled out during the United States Civil War.

No doubt looks and charisma have played an important role in bringing our citizens to prominent positions in all areas, but our history is fraught with a mix of leading figures of varied ethnic backgrounds (mostly mestizo – fortunately not yet recognized as a “race,” I may add) who have come to power, many times by violent means, for a wide variety of reasons and various circumstances, but none of them related to ethnicity or skin color. I am sure you will find pockets of racial bigotry in Mexico, cases where the “pretty” gets the job, but they are by no means determining influences in the national business community course (which was, I believe, the stated focus of your essay).

It seems accurate to say that ethnic blending in Latin America has been, from the beginning, much more intense and extensive than in the rest of the American continent; also it seems fair to assume that our origins and our behavior toward one another are closely related to that blending. To make the matter even more complex, a portion of the European population that finds its way into this synergy had its own mestizo history with 700 years of Arab occupation of Spain. This all too human historical mix, in itself, makes it impossible to view racism in Mexico in simplistic terms; it takes the origins, causes, and ways of discrimination that your keen sense has found far beyond the pale, or the color, of skin.

Yes, I think we are racist, but then again, to some extent, who is not?Essay ©Francisco Pelaez, 2005 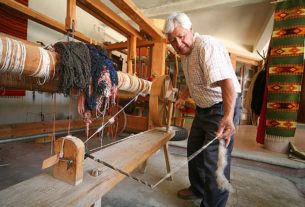