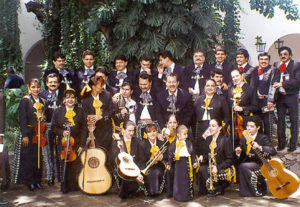 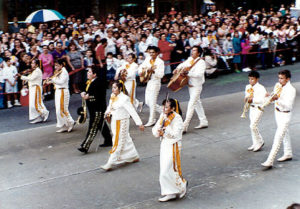 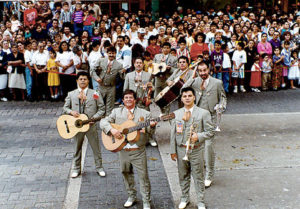 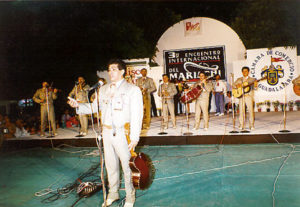 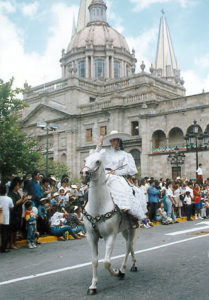 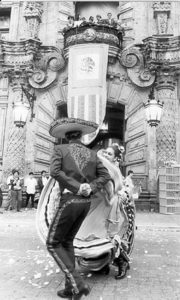 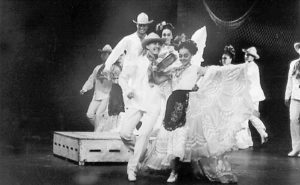 The only thing more Mexican than tequila is the mariachi and it seems a shame to have one without the other.

Mariachi goes beyond music, it is the sum of a cultural revolution expressed through a group of musicians, dressed in popular clothing (most recently charro suits) which encompasses the essence of Mexico and its people. It is something cultural, spiritual and traditional that is unique to this country, an experience not to be missed.

The word mariachi refers to the musicians now commonly seen in restaurants or strolling the streets, dressed in silver studded charro outfits with wide brimmed hats playing a variety of instruments which include violins, guitars, basses, vihuelas (a 5 string guitar) and trumpets.

The mariachi originated in the southern part of the state of Jalisco sometime in the 19th century. No one is sure where the name comes from although a variety of theories have been postulated and, depending on which best fits the postulators needs, are adhered to.

The original theory held that mariachi was derived from the French word for wedding – mariage, because of the type of music played at these events. The only problem with this theory is that the music originates in a part of Mexico the French never visited and, even it they had, it began before their arrival in 1864.

Another theory states that the word comes from the indigenous name of the Pilla or Cirimo tree, whose wood is used to make guitars. If this were true then the word mariachi would be applied to the instrument itself and not to those who play it.

It has also been suggested that the name comes from a festival in honor of a virgin known as Maria H. (mah-ree-ah AH-chay) at which musicians played and that over time they were given this name.

The truth is that no one knows where the name originated, but it is one which is associated with a great deal of prestige not only in Mexico, but around the world.

The origins of the mariachi itself (the group, culture, music, etc.) are not much easier to trace. The mariachi is the sum of a cultural evolution that has taken place over the last century or so in Mexico.

Although the indigenous tribes of Mexico made music with flutes, drums and whistles, there is no clear link between the indigenous music and the mariachi. The instruments originally used by the mariachi were those introduced by the Spaniards – violins, guitars, vihuelas, harps, etc. These instruments were intended to be used during masses but the criollos (Mexicans of Spanish descent) began using them to make popular music as well, much to the chagrin of the priests, since they were used to accompany some of the more scandalous, satirical or anticlerical couplets of the times.

Mariachi music thrived with the support of the people. The criollos of the 19th century did all they could to wipe out every last trace of the Spanish presence in Mexico and, by doing so, supported the mariachi music.

Mariachis could be seen wearing traditional workmen’s clothes – white pants and shirt and a straw hat, and traveling around looking for work. Most commonly they would find employment at any of the haciendas where they would earn more than the average laborer.

With the revolution, many of the haciendas were forced to let the mariachis go. They would then wander from town to town singing songs of revolutionary heroes and enemies, carrying news from one place to another.

Still not enjoying the same position they had before, the mariachis took to playing in public venues for a fee. One of the most popular of these was San Pedro Tlaquepaque in the state of Jalisco, a fashionable place for the residents of Guadalajara to spend their summers.

Since they were playing for a fee they were forced to add new elements to their music and to expand their repertoire to include waltzes and polkas.

By the early part of this century, the mariachi began to regain its popularity. The most prized of the mariachis were still those from the state of Jalisco, particularly the areas of Cocula and Tecalitlán. They represented Mexico to the people during the Independence day celebrations in Mexico City in 1933 as well as during Lázaro Cárdenas’ election campaign in 1936.

With the advent of radio and television, their popularity continued to grow. Recording contracts were signed and they were paired with famous singers like Jorge Negrete and Pedro Infante. Due to the popularity of jazz and Cuban music, the trumpet was adopted, pushing the violins into second place and, in some cases, replacing the harp.

Movies were made that represented Mexico as a place populated with truly macho men whose live revolved around the charro, tequila and, of course, the mariachi.

Today, mariachi music is played around the world in places as far away as Japan and Europe. This integral part of Mexico’s culture and history is celebrated each September in its birth place, Jalisco.

1 thought on “What is the mariachi?”