Of the leaders of the Mexican independence movement, the one who most resembled Nicolás Bravo was Ignacio de Allende. In my coverage on Allende, I described him as a “law-and-order” rebel, one who believed in independence from Spain but rejected radical transformations of society and detested mob violence. Nicolás Bravo was in the same mold, favoring an end to Spanish domination but consistently placing himself on the conservative side of the rebel movement.

Bravo was born in 1786, on a hacienda owned by his family near Chilpancingo, Guerrero. Though of affluent creole background, he did not sympathize with the Spanish colonial regime. When the independence movement began in 1810, he was pressured by the colonial authorities to furnish men to put down the rebellion. He refused to do so and in May 1811 joined General Hermengildo Galeana, a leader of rebel forces in the neighboring state of Morelos. During the Independence War he campaigned mainly in Morelos and in his home state of Guerrero. On one occasion he was in the vanguard of an attack on Chichihualco, the village where his family hacienda was located. During the siege of Cuautla he distinguished himself for valor and was then named military commander for the state of Veracruz.

Throughout the Independence War, Bravo gained a reputation for humane behavior in a savage brother-v-brother conflict where brutality was widely prevalent. At Palmar, near the port of Veracruz, he defeated an enemy force under the royalist commander Juan Labaqui. This detachment was guarding a large convoy of flour, which fell into Bravo’s hands. Just about this time, Bravo heard that his father had been captured by the royalists and sentenced to a long prison term. Normally, such a development would have boded ill for any prisoners seized by a military leader who receives news of this nature. But Bravo’s humanitarian instincts prevailed. Three hundred prisoners had been taken during the Palmar engagement — and Bravo set them all free.

Bravo’s decency was not reciprocated. In 1816 he was captured at his hacienda and imprisoned with shackles on his legs until the independence movement finally triumphed in 1820. Agustin de Iturbide, who had hijacked the movement’s leadership after fighting on the royalist side during most of the war, awarded Bravo the rank of colonel. But the vainglorious Iturbide’s self-promotion to emperor did not please Bravo. Allying himself with Vicente Guerrero, who represented the more liberal wing of the independence movement, he joined a successful revolt to depose Iturbide. Then — and at Iturbide’s request — he commanded the detachment that assured safe exit from Mexico for Iturbide and his family.

Freemasonry was very powerful in Mexico during this period and the liberal-conservative split among the independence movement’s leaders was mirrored in adhesion to opposing branches of the Masonic order. The liberals joined the York rite and the conservatives, including Bravo, the Scottish rite. This stand brought Bravo into opposition against Joel Poinsett, the meddling U.S. minister to Mexico, who was a strong supporter of the York rite faction. Bravo had been serving as vice-president of Mexico under President Guadalupe Victoria (1824-28), the only one of Mexico’s early presidents who succeeded in serving his full term. In 1827, deciding that Victoria was too liberal, Bravo mounted a rebellion against him, issuing a manifesto calling for a strong central government and the expulsion of Poinsett from the country. The rebellion failed and Bravo went into exile in Ecuador, from where he returned under amnesty in 1829.

The liberal Vicente Guerrero became president in 1829 and Bravo found himself in opposition to his former ally. As a compromise between the factions, the conservative Genera Anastasio Bustamante became vice-president. This proved to be a case of nursing a viper at one’s bosom. Bustamante “pronounced” against Guerrero in 1830 and, in the fighting that ensued, Bravo led forces that defeated Guerrero at Chilpancingo in the same year. Betrayed by a traitor when he attempted to board ship in Acapulco, Guerrero was executed in 1831.

All during this period the dominant political figure in Mexico was the flamboyant and fast-talking Antonio López de Santa Anna. Santa Anna, a superlative con man, was able to deceive men who were far his superior morally and intellectually. Among these dupes was Nicolás Bravo. Santa Anna, eleven times president, several times military dictator, occupied center stage in Mexican politics between the fall of Iturbide in 1822 and his deposition and exile in 1855. During this age of santanismo, Bravo was commander of the northern armies in 1836, interim president in 1839 (Santa Anna, who disliked administrative routine as much as he liked titles and medals, had retired to his estate in Veracruz to indulge his favorite pastime of watching cockfights), deputy from the state of Mexico in 1841 and interim president again in 1842 and 1846. During the war with the United States, Bravo was commander of Mexican forces in Puebla and south of Mexico City. Captured at Chapultepec on September 13, 1847, his enemies later accused him of inept generalship. After that, Bravo retired to his estate in Chilpancingo and lived out the remaining seven years of his life in obscurity.

Nicolás Bravo died tragically. In 1854 the liberal General Juan Alvarez issued a manifesto against Santa Anna called the Plan de Ayutla. The 68-year-old Bravo was asked to join the movement but refused on grounds of ill health and because he did not share the political views of the Ayutla conspirators. Shortly afterwards, Bravo suddenly died. Since his wife died on the same day, there was strong suspicion that the couple had been poisoned. The rumors may have had some foundation because a doctor named Aviles was found guilty of the deed and shot. Whether Dr. Aviles was the poisoner or simply a convenient scapegoat has never been established.

Following a decree by the state government of Guerrero, there is a monument to Nicolás Bravo in his home town of Chilpancingo. 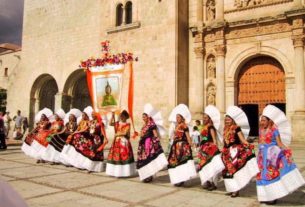