Quetzalcoatl was coming. Moctezuma had already sent wizards, magicians and seers, to cast spells that would destroy or at least deter the Spaniards from continuing toward his capital. Their failure had re-confirmed the emperor’s opinion that these were indeed the gods of the legend. He had also sent ambassadors with gold and other treasures to beg the strangers not to continue on towards Tenochtitlan . Reasons for his apprehension about the legendary god’s return are not clear. Perhaps it was fear of being deposed or being punished for the human sacrifices in which the Aztecs indulged since, Quetzalcoatl disapproved of human sacrifice. Despite his fears, Moctezuma now surrendered to the inevitable and prepared to welcome the strangers.

There is some evidence that during his visit to Cempoala, Cortes realized that the Conquistadors had been mistaken for supernatural beings but it appears that he had never heard the Aztec legend of the return of Quetzalcoatl. He did understand that ambassadors were treated with respect. Thus in every contact with Moctezuma, he presented himself as an envoy of the king of Spain and in his own words, “the true faith.” Furthermore, he sent messages to the Aztec monarch assuring him that he had come in peace but was obligated to present his message in a face-to-face meeting. Aztec accounts of the Conquest make it clear that the combination of the Quetzalcoatl legend and the bad omens all worked in favor of the Spaniards. Also, the Aztecs resorted to violence only to capture prisoners for sacrifice to their gods. The concept of warfare to annihilate an enemy was alien to them.

Enroute to the Aztec capital, the Spaniards had stopped at Cholula. There they had destroyed a temple and an idol and massacred many Cholulans. Strangely, both the Spanish and Aztec versions of the causes of this bloodletting seem to indicate that the Conquistadors were provoked. Bernal Diaz and Prescott say that the Cholulans, instigated by Moctezuma, were preparing to attack the visitors whom they had welcomed warmly just days before. Both claim that an old woman had sought to protect Donna Marina, the Christian name of the woman called La Malinche, by warning her of the impending attack. She in turn warned the Spaniards. The Aztec version denies Moctezuma’s involvement and claims that the Tlaxcalan allies of Cortes instigated the massacre. They report that an ambassador sent from Tlaxcala, seeking to insure a peaceful passage through Cholulan controlled territory, had his face and arms flayed and was otherwise crippled. As already noted, traditionally, ambassadors were always treated with respect.

Everything that the Aztecs themselves report about the state of mind of Moctezuma, his indecision and conviction that he was dealing with returning gods, make it unlikely he planned to attack them. Thus the theory about Tlaxcalan responsibility for the whole thing is at least credible.

The approach of the Conquistadors to Tenochtitlan as reported by the Aztecs themselves to Fra Bernardino de Sahugun after the Conquest and recorded in the Codex Florentino, is factual and vivid. Here is how they describe it:

“Four stags (horses) came in front like leaders. They prance, turn, look backwards, then from side to side. Then come dogs, their noses to the ground. At the very front, there is only the banner. The bearer carries it on his shoulders. He waves it from side to side. Following him are those with unsheathed swords shining and glittering. They carry their shields on their shoulders. Now come stags with riders on their backs These riders wear cotton armor, carry shields covered with leather. Swords hang from the necks of the animals. Then come crossbowmen, musketeers and finally their Indian allies.” Reading this description of a “show in force” it is easy to understand Aztec unease.

Just outside the city, the Aztec Emperor and four of his most important advisors met the Conquistadors. Again, we turn to the Codex Florentino to confirm the sincerity of Moctezuma’s belief that he was meeting supernatural people. Here is a condensed version of the meeting.

After receiving gold necklaces and other gifts, Cortes spoke first: “Are you Moctezuma? Are you the king? Is it true that you are the king, Moctezuma?”

The king replied: “Yes, I am Moctezuma.” Standing up, he came forward, bowed his head low, and said, “Our lord, you are weary, the journey has tired you, but now you have arrived on the earth. You have come to your city, Mexico. You have come here to sit on your throne, to sit under its canopy.” The speech by Moctezuma was a long one. He finished up by saying, ” This was foretold by the kings who governed your city, and now it has taken place. You have come back to us; you have come down from the sky. Rest now, and take possession of your royal houses. Welcome to your land, my lord.”

It was only after the speech was finished that La Malinche translated it to Cortes.

Perhaps she had omitted the constant references to the invaders as ‘gods”. She knew full well that these were mortals. This possibility gains some credence from the reply to the speech. All Cortes is quoted as saying is: “Tell Moctezuma that we are his friends. There is nothing to fear. We have wanted to see him for a long time. And now we have seen him and heard his words. We have to come to your house in Mexico as friends.” There is no reference to having been called a god. Thus on November 8th, 1519. the Conquistadors entered Tenochtitlan. At this point the Spanish and Aztec version of events begins to differ.

According to Bernal Diaz, after the first meeting with Cortes, the Aztec Emperor and his escort returned to the city, leaving two of his nephews to escort the party to their quarters where Moctezuma waited to greet them. Diaz claims that for four days Cortes visited the emperor daily, explaining Christianity, asking him to end human sacrifice and cannibalism, destroy the idols the Aztecs worshiped and finally to permit the erection of a cross and a church on the site of the Temple of Huitzilopochtli. Too, Diaz wrote that Cortes explained to Moctezuma that he and his men were not gods, but rather servants of a great emperor and had come only to warn him about the evils of their ways of worship. Of course Moctezuma refused these requests, but did grant permission for the erection of a Cross and the construction of a church in the plaza in front of the palace in which the visitors were lodged.

The Aztec version of these same days is different. They say, “When the Spaniards entered the Royal House, they placed Moctezuma under guard.” There are no mentions of daily visits or the efforts to persuade the emperor to embrace Christianity. Nor do they mention the revelation by Cortes that he was an ordinary mortal. The Aztec account says that almost immediately the Conquistadors demanded gold. Moctezuma was forced to open both his private and the national treasure houses. Both were looted. He was also persuaded to permit the Spaniards access to the main temple of Huitzilopochtli, a place out of bounds to all but priests.

Although the Aztecs were unhappy about the detention of Moctezuma, all remained peaceful until the Spaniards, now commanded by Pedro de Alvarado while Cortes went to fight an army sent by the Governor of Cuba to arrest him, massacred Aztecs peacefully celebrating the Fiesta of Toxcatl. They had asked for and received permission for the celebration, held in honor of Huitzilopochtli. Here is the Aztec report, somewhat condensed, taken from the Codex Aubin:

“On the eve before the festival they built a statue of Huitzilopochtli, dressed it in feathers, clipped on earrings of turquoise and fashioned a nose of gold and fine stones. A “magic” feather headdress, a cloak with pictures of skulls and bones and a vest, decorated with pictures of dismembered human parts, completed the costume. The next day unarmed Aztec warriors filed into the temple courtyard and started the “Dance of the Serpent.” At the very height of the Fiesta, the Spaniards attacked. They came on foot, sealed off all escape routes. They ran among the dancers, stabbing them, spearing them. They attacked the man playing the drum, cut off his arms and beheaded him. The blood of the dancers flowed like water. The stench of blood and entrails filled the air.”

Once word of the massacre spread, a great cry went up. “Mexicanos, bring your spears and shields! The strangers have murdered our warriors.” Attacked, the Spaniard retreated to their palace and began to shoot at the Mexicans with crossbows, cannons and arquebuses. Now they were besieged in the palace.

Bernal Diaz, who was with Cortes, says the massacre was a warning to head off a future insurrection. Prescott too, half apologizes for Alvardo, by claiming he feared an attack on the Spaniards who were watching the event. Cortes had defeated the expedition sent to arrest them and persuaded the new arrivals to join him. Hearing about the fighting, he rejoined the besieged garrison. However, he took no action against Alvarado other than to scold him. According to Bernal Diaz, Cortes led a final sally, hoping to cow the attackers. They did destroy the temple and the idol of Huitzilopochtli, but suffered heavy losses. That night Moctezuma, attempted to end the fighting by addressing the attackers. The reply to this by the Aztecs was:

“Who is Moctezuma to give us orders? We are no longer his slaves.” They then loosed arrows and stones at the emperor.

The attack continued for 7 days and then a siege continued for 23 more days. According to Bernal Diaz, Moctezuma made one last attempt to make peace. Attempting to address the attackers, he was greeted with a barrage of stones, was fatally injured, and died a few days later. Strangely, Aztec records make no mention of the destruction of their temple or this second appeal but say that the Spaniards stabbed Moctezuma to death as they prepared to flee.

We are all familiar with the Spanish retreat on “The Sorrowful Night.” The Aztec version is very similar to the one that we know but gives bloody details that non-Aztec historians have glossed over. In part four we will finish the story and attempt to evaluate the revelations of the Aztec account of the Conquest. 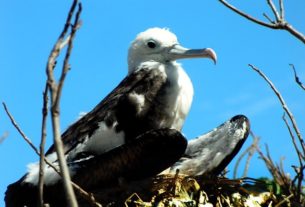