Every April, the central Mexican village of Tlaxcalancingo, Puebla, celebrates the Feria de Nopales, a tribute to its most important crop, the nopal cactus. Set against a background of snow-capped volcanoes, the bright green fields yield one of the healthiest, most versatile foods to grace the Mexican table. The fair’s featured repertoire of nopal recipes includes everything from tacos de nopalitos to nopal ice cream, all prepared by local cooks and eagerly gobbled up by villagers and visitors alike.

But what exactly is a nopal, and how can cactus be palatable, let alone delicious?

Known in English as the “prickly pear” cactus, this member of the Opuntia genus produces the vegetable called nopal, sometimes referred to as “cactus paddles” in the Southwestern United States, and the fruit called tuna. Both have been used extensively in Mesoamerica, particularly by the Aztec and Maya people, since pre-Columbian times.

The pear-shaped fruit, ranging in color from greenish-white to purple, and in flavor from sweet to sour, was eaten raw if sweet, or cooked if sour. (Even today, the sour variety called xoconostle, from the Nahuatl xocotl, or “sour fruit” is used to flavor certain stews.) The tuna fruit was also used to make wine or boiled down to make a sweetener.

The pads, or “paddles”, are flat, hand-size vegetables, either green or purple, covered with spines (called agüates in Mexico) which have to be removed before eating. The pads are high in vitamins A and C, as well as B complex vitamins and iron. The mucilagenous fluid contained in them, while boiled out for most recipes, is now extracted and used as a soluble dietary fiber supplement found in health food stores.

The plants growing wild have, for purposes of survival, more spines than cultivated nopales. Almost all those sold commercially, whether in small Mexican mercados or US supermarkets, have the spines already removed. In many cases, the pads have also been cut up into small squares or strips called nopalitos. A common sight in Mexican markets is the nopal vendor, busy scraping the spines and dicing the pads, which are then ready for the shopper to take home and cook.

At Texas A&M University, work is being done to develop a spineless pad, but for now, there are a few points which should be kept in mind when preparing home-grown nopales to be used in recipes.

Harvest only the tender, young pads. Cut the pad from the main plant leaving about one inch. This stub will be the start of a new pad. Use a knife to cut out the spines and a vegetable peeler or brush to scrub the pads, which will remove any protruding nodes. (These nodes are the beginnings of new spines.) Once the pads have been cleaned, the nopales may be cooked by either boiling or grilling. Some people cut them up and eat them raw in salads, but for most, removing the mucilagenous liquid by cooking is preferable. Boiled, their taste has frequently been compared to that of green beans. Grilled, nopales have a delicious, distinctive flavor of their own, especially good with grilled meat.

To boil nopales, wash them and cut them into small squares or strips, if they have not been purchased this way. Place them in a pot with cold water to cover, bring to a boil, lower heat and simmer for 10-15 minutes. Some Mexican cooks say that by adding a few tomatillo husks, the sticky liquid (commonly called “babas”) will be more completely extracted from the vegetable. Others say that a pinch of baking soda accomplishes the same thing. I have tried both and found the baking soda to be more effective, but use only a pinch and add it at the very end. Using more may cause the water to foam up and run over.

To grill nopales, cut them from the wide, rounded outer edges toward the narrow base, but not all the way to the end, fanning out the cuts so that the paddles look fringed. Brush them with olive or vegetable oil and grill until soft and slightly charred. Grilled nopales are a requisite element of a parrillada, or Mexican mixed grill. Nopales can also be cut into strips, batter-dipped and rolled in breadcrumbs, cornmeal or flour, and fried like french fries. In addition, cooked nopales can be added to soups, stews and salads. They can be scrambled with eggs – a favorite Mexican Lenten dish – or used as a taco filling.

Mexico exports many of the nopales sold north of the border – 40,000 pounds are shipped daily to Texas alone – and they are also grown as an export crop in Central America and Israel, making them widely available in supermarkets. If, however, you cannot get fresh nopales and must use canned, be sure to rinse them well before using.

For a delicious, healthy, and very Mexican addition to your menus, try the following recipes or incorporate nopales into your own favorite dishes. 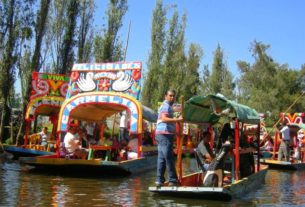