The first Englishman to set foot in Xalapa was an unfortunate fellow called Robert Barrett. That was back in 1568. Some 432 years later, another Englishman has set foot in this delightful city. But Richard Nathan considers himself a lot more fortunate, even though he arrived here after walking nearly 4,000 miles (6,400 kms). A strange twist of history connects the differing fates of the two Englishmen in Xalapa.

Nathan set off walking from Guysborough, Nova Scotia, on August 18, 1999. 271 days later, on May 14, 2000, he arrived at his destination, Barra del Tordo, a tiny fishing village about 50 miles (80 km) north of Tampico. His inspiration to do this marathon walk came partly from a story involving, among others, the unfortunate Robert Barrett. But some of Barrett’s comrades had better luck, as a result of which Nathan discovered the tale that inspired him.

Robert Barrett was part of a small English fleet, under the command of his cousin Sir John Hawkins, which came to grief in a battle with a significantly larger Spanish fleet at San Juan de Ulua, the port of Veracruz. Barrett was captured in the battle and, along with other English prisoners, he was taken to Xalapa. About 200 Englishmen escaped from Veracruz, including Hawkins and his even more famous cousin, Francis Drake. But they were forced to abandon most of their ships, and virtually all the survivors were crammed aboard one ship that had no provisions and was badly in need of repair. To make matters worse, the ship got caught in a hurricane, and Hawkins quickly realized that with 200 men on board a leaky craft, his chances of making it back to England were virtually non existent. And so, on October 8, 1568, 100 men very gladly elected to be marooned on the beach, at a spot close to where the Rio San Rafael Carrizal flows into the Gulf of Mexico, past the village of Barra del Tordo.

Barra del Tordo wasn’t there in 1568, but Tampico was – the northern outpost of Spain’s Mexican Empire. So, in dire straits, the majority of these English castaways walked the 50 miles down to Tampico, in the hope that the Spaniards would be merciful, which they weren’t. Twenty of them, however, decided not to gamble on Spanish charity, but to walk instead into the great unknown wilderness to the north. Their gamble was to reach the north-eastern seaboard of America, where they might come across a seasonal cod-fishing boat and thumb a ride back to Europe. In September 1569, just as the annual cod-fishing season was drawing to its close, David Ingram, Richard Twide, and Richard Browne reached Nova Scotia and found a French cod-fishing boat. As to the other seventeen? It seems they found some pleasing Indian ladies along the way and decided to heck with walking!

Nathan’s Odyssey was a reverse version of this earlier trek. He made this switch partly because of climate. He started in August, which would not have been a good time to be walking through Tamaulipas and Texas.(April and May were hot enough!) In this, he was true to the journey of the earlier Englishmen, who also had the good fortune to miss the killer heat of northern Mexico and Texas. But, he also wanted to end his journey in Mexico, at the spot close to where we know, from Hawkins’ records, that the English sailors were set ashore. (The precise spot in Nova Scotia where their journey ended involves a lot more guess work) And, by finishing in Mexico, Nathan would then have the opportunity to stay in the country and learn its language and its culture, while he was writing a book about his adventures and its historical inspiration.

Several of Nathan’s friends were concerned about his safety walking the Mexican part of his journey, the 280 miles from Matamoros to Barra del Tordo. On some occasions in the US he’d been hosted for the night by friendly strangers. But on most nights, he camped out, pitching his small tent somewhere off into the woods. In Tamaulipas, there are no woods, so it is virtually impossible to camp out in the wilds, away from the view of potentially dangerous strangers. Though he had little fear about his personal safety, he did take extra precautions during the three weeks he was walking through Tamaulipas. For example, in towns such as San Fernando and Soto La Marina, he stayed in a cheap motel. Out in the open country, he ended his days at a ranchito or a tienda and asked the owners if he could set up his own tienda in the safety of their compound. He was never refused. In fact, on most of such occasions, the family invited him into their home for supper and breakfast.

Fears for his personal safety were also allayed thanks to his companion, Ulises, a lively Springer Spaniel mix. Nathan had started his journey alone, but he’d wanted to get a dog as a companion and bodyguard. Ulises was given to him by the Humane Society of New York, who very obligingly dropped him off just south of Portsmouth, New Hampshire. Ulises had been just one day away from being put to sleep when the Humane Society rescued him from a pound in Manhattan. Now, after more adventures than any dog could dream of, he is enjoying life to the full in Xalapa, where he can be seen each morning, taking a stroll around Los Lagos.

Nathan has just completed his book, which he is calling Walking with Time. He has an agent in the United States, and is hopeful that the book will be published sometime in the coming year. Ulises is also planning to write a book, Tails of Brave Ulises, which will probably be for readers aged 7-9, who seem to be his biggest fans. Both man and dog will be returning to the US sometime in the New Year. But, there is a strong possibility they will return to Xalapa, where both have found much happiness.(It would be very hard to say a final farewell to the spectacular view of Pico de Orizaba!)

BIO: Richard Nathan was born in Yorkshire in the north of England and studied Philosophy at Trinity College, Oxford. He has traveled extensively in Europe, Africa, Asia, and Australia, and has worked as an antiques auctioneer and a high school English teacher. He has been a resident of the US since 1985, and has lived for most of that time in Los Angeles. 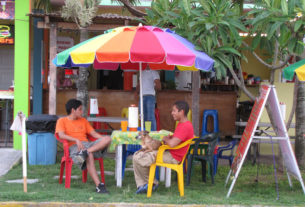