Cormac McCarthy is best known for his Border Trilogy, three novels set along the Texas-Mexico border, the first of which, All the Pretty Horses, is set almost entirely in Mexico, south of the Texas border.

All the Pretty Horses won both the National Book Award (1992) and the National Book Critics Circle Award. A few years later (2000), Billy Bob Thorton directed the film adaptation starring Matt Damon and Penelope Cruz. Cruz plays the delectable young Mexican aristocrat, Alejandra, and Matt Damon plays a sensitive young cowboy, John Grady Cole who, while falling in love with Alejandra, ponders the evil and pain of the world: “What he had not known was that it was mindless….” The trilogy continues with The Crossing and concludes with Cities of the Plain in which a now older John Grady Cole falls in love with a beautiful Mexican prostitute.

In his recent (but not latest) novel, No Country for Old Men (2005), Cormac McCarthy returns to the Texas-Mexico border, although unlike the Border Trilogy, which is set in the late 1940s and early 1950s, the time is now closer to our own, the early 1980s.

Llewellyn Moss, the protagonist, is a Vietnam vet and sort of a generic good old boy. While hunting antelope near the Mexican border Moss stumbles into a clearing where he finds the bodies of several men brutally murdered, packages of heroin behind the seat of a pickup, and in a leather document case, two-million-four-hundred-thousand dollars in cash. In a decision that he knows as he makes it will dramatically change his life, Moss takes off with the money and stashes it in his trailer house; and then later that night he leaves his young wife in bed to return on a trip of mercy to take water to one of the victims he thinks might still be alive. He discovers that, in the dark men, with guns are waiting for him and he says to himself, about himself: “There is no description of a fool… that you fail to satisfy.” [Note: Quotation marks are mine. McCarthy, throughout, presents his dialogue without quotation marks.]

Moss, suddenly caught in the middle of a drug war, sends his nineteen-year-old wife, Carla Jean, into hiding, and then does what any red-blooded man would do — he goes on the run, with the chase playing itself out on both sides of the bloody Texas-Mexico border. Elements of the classic western novel and elements of the modern crime novel rush into action side by side. One critic calls No Country for Old Men a “noir western.”

The aging Sheriff Ed Tom Bell (as well as his wife Loretta) is decent-hearted, and his self-searching and frequently folksy (and sometimes tedious) monologues add some comfort, some familiar moral territory, to the otherwise dark mood of No Country for Old Men:

“There’s no requirements in the Texas State Constitution for bein’ a sheriff. Not a one. There is no such thing as a county law. You think about a job where you have pretty much the same authority as God and there’s no requirements put upon you and you are charged with preserving nonexistent laws and you tell me if that’s peculiar or not. Because I say that it is. Does it work? Yes. Ninety percent of the time. It takes very little to govern good people. Very little. And bad people can’t be governed at all. Or if they could I never heard of it.”

Ed Tom likes being Sheriff Bell because it gives him something to “be.” He says, “My daddy always told me to just do the best you knew how and tell the truth. He said there was nothing to set a man’s mind at ease like wakin’ up in the morning and not having to decide who you were. And if you done something wrong just stand up and say you did it and say you’re sorry and get on with it. Don’t haul stuff around with you. I guess all that sounds pretty simple today. Even to me.”

The psychopathic killer, Anton Chigurh, is terrifying… in part because he is intellectual, even witty in a grotesque way, a keen observer, fascinated in fact by the “art” he has created in the random murders he commits: “Chigurh shot him through the forehead and then stood watching. Watching the capillaries break up in his eyes. The light receding. Watching his own image degrade….” For his bizarre weapon of death, Chigurh uses a slaughterhouse stun gun with a pneumatic device designed to shoot out a retractable steel bolt into the heads of cattle, but Chigurh shoots it into the heads of all those who cross him. One man warns about Chigurh, “There’s no one on alive on this planet ever had even a cross word with him…. They’re all dead. These are not good odds.”

Initially Chigurh is able to pick up the trail of Moss because of a transponder unit nested into a packet of hundred dollar bills with the center cut out. As Moss discovers this, it “occurred to him that he would probably never be safe again in his life and he wondered if that was something that you got used to.”

During the chase, Moss is badly wounded, but he is still able to walk, in the middle of the night, across the bridge into Mexico, into Piedras Negras, where he finds, for a few days, solace and some healing in a little Mexican hospital; but the psychopath Chigurh finds that Moss is there as well and comes looking for him. Moss must escape and make it back across the border, this time without his shoes, and naked except for a bloody overcoat.

Joel and Ethan Coen wrote and directed the film version of No Country for Old Men, scheduled to be released in early November of this year. In the Coen film, Josh Brolin plays the good man Llewellyn Moss trapped in a world of evil; Javier Bardem plays Chigurh, the psychopath we all fear lurks just around the corner; and Tommy Lee Jones plays Sheriff Ed Tom Bell, a righteous man trying to live his simple code but caught up in forces that threaten to tear asunder everything he ever thought he knew or believed in.

On the Texas-Mexico border, more violent now than at any other time in its history, the novel plays itself out. Sheriff Bell, feeling old and unable to fathom the enormous and destructive changes that have taken place in the psyche of his country and his own beloved county in Texas thinks, “I know as certain as death that there ain’t nothing short of the second comin’ of Christ that can slow this train.” He turns at last to seek out the wisdom of another old man, his crippled uncle.

“You ain’t turned infidel have you Uncle Ellis?”

“You think he can stop it?”

Indeed, the country of Cormac McCarthy’s novel is “no country for old men.”

MexConnect is reader-supported. Purchases made via links on our site may, at no cost to you, earn us an affiliate commission. Learn more.
Published or Updated on: June 30, 2007 by James Tipton © 2008
Share This:
Tagged book-reviews James Tipton mexico-novels 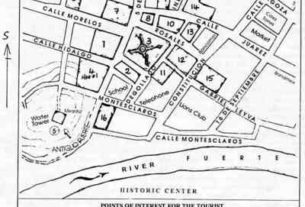 Setting up a business in Mexico

The Best of San Miguel de Allende by Joseph Harmes