It is often said that when the US gets a cold, Mexico gets pneumonia. This time it didn’t happen. Let’s look at the data from Mexico’s dynamic economy. During this last recession, in the US millions of homes are in foreclosure, 250 banks failed, bailouts cost trillions of dollars, the deficit rose to 1.4 trillion dollars and unemployment remains above 9%.

In Mexico, however, there were minimal housing foreclosures, no banks failed, there were no bailouts to industry or banks, the deficit is a modest 3.4 billion dollars and unemployment has now dropped to about 7%. Mexico is rapidly pulling out of the recession and the economy has an expected growth rate of 3% to 4%, while the US is hoping for 1.5% growth rate.

The electronics industry of Mexico has grown enormously within the last decade. In 2007 Mexico surpassed South Korea and China as the largest manufacturer of televisions and now dominates the world in the production of TV sets. In 2008 Mexico surpassed South Korea and Taiwan to become the second largest producer of smartphones in the world with companies such as Sony Ericsson, Motorola, Samsung, LG, Nokia, Sharp and Blackberry. Mexico is the third largest manufacturer of computers in the world with both domestic companies and foreign companies such as Dell, Sony, HP, Acer, Compaq, Samsung and Lenovo.

Mexico differs from other Latin American countries and developing nations in that it does not function as a mere assembly manufacturer. The industry produces technologically complex components and engages in some research and development activities; an example of that is the new Volkswagen Jetta model with up to 70% of parts designed in Mexico. Most of the world’s auto manufacturers already have plants in Mexico but expansion is now under way with Toyota opening two new plants in Mexicali and Guanajuato. Honda is investing $800 million USD in Queretaro as well an equal amount by Mazda. Honda is also opening a new plant in Jalisco. Fiat’s new plant in Toluca has orders for 50,000 cars destined for China. So far Mexico’s auto production has increased by 14% this year.

We usually don’t think of Mexico as an aerospace giant. However, Mexico is a major producer of subassemblies for Boeing, Airbus and Bombardier. Bombardier (Leer Jet) is the third largest airplane manufacturer in the world and will be building complete airplanes in Queretaro in a few years.

Globalization is what happened. Free trade between states was built into the constitution of the US. Now free trade is spreading to all countries through free trade agreements. The bad news is that First World countries have to compete with emerging market economies, especially in labor. Jobs are moving to the country that will produce quality products the most cheaply. The good news is that products cost less. There is no stopping globalization; any country that attempts to back out will become tomorrow’s Eastern Europe. Although the prognosis for Third World countries is bleak at best, over time, emerging market countries like Mexico and First World countries will become more equal and everybody wins.

Published or Updated on: January 1, 2012 by Robert Kleffel © 2012
Share This:
Tagged doing-business finance-economics 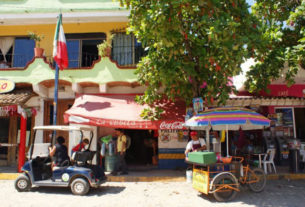