The first time was in New York, along Seventh Avenue, near the intersection with Broadway, where the streets come together to make a piece of pie. No doubt I was gawking. Might as well have carried a sign saying “Country bumpkin at the county fair.”

A dapper little gentleman, who, in real life, could have been an aluminum siding salesman, caught up with me and matched me step for step. Without looking directly at me, he said in a stage whisper, “Pssssst! Wanna buy a Rolex?”

An instinctive defensive mechanism, bred into conservative East Tennesseans, kicked in and I said no, thank you. He said he’d make me a really good deal. I kept walking, somewhat unnerved in the presence of this sidewalk bandit who would probably try to mug me, or at least pick my pocket, in broad daylight.

He kept walking and talking quietly about the virtues of a $15 Rolex. So, how about $12? Nothing else happened. He finally laughed a little, more like a snicker, gave up, and turned left.

A couple of years later, in the Atlanta airport, a man tried to sell me his Rolex and a diamond ring. He needed to raise funds, he said. Ticket to Los Angeles cost more than he had expected. Being more experienced by then, in the ways of the world, I respectfully declined his offer and confidently walked away.

The third Rolex offer was in Tijuana, January 1988, Friday before Super Bowl XXII in San Diego. All NFL stories that could be written had been written. Players were off-limits and that created the opportunity to go slumming. A complimentary Buick, corporate sponsor, was available for the press run to the border. The late Wayne Fuson, Indianapolis Star, was partner to this adventure.

Tijuana was somewhat cheesy, disappointingly dusty, and too loud for us sophisticated sports editor-types. But, we had seen souvenir sombreros and had heard about bargains in leather and pottery. Good deals? Mexican vendors would wilt before our powerful negotiating skills.

We warmed up slowly, just looking. We asked a policeman where to do lunch. His uncle had a nice little place right over there, down one flight, order the beef kabob. It was good and cheap.

We were soon back on the street, about to buy belts, when the Rolex salesman spotted us. He was loaded, a briefcase full, some on display from his wrist to his elbow, some in cloth bags. He started at $40. I brought him down to his and hers for $45, knowing all the while I wasn’t going to fall for those fakes.

Wayne enjoyed the show and showed his money. The neighborhood coffee club was going to love his new $22.50 Rolex. And, for that much more, he’d surprise his wife. I was stunned that he could be taken so easily. He smiled when I teased him.

Weeks later, Fuson called with breaking news. On a lark, his jeweler friend had checked out his “investment.” Sure enough, Wayne’s Rolex was a fake. You aren’t going to believe this, he said, but the wife’s Rolex is the real deal, model number stamped on the side of the case at 12 o’clock, serial number at 6, second hand moving smoothly, no ticking. So, what do you think about that?

A multi-thousand-dollar watch for $22.50 stretched the limit of what I could stand. To tell the whole truth, I never got over it.

Years later, in Ajijic, on the north shore of Lake Chapala, in mostly sunny Mexico, the chunky, little Rolex man opened his carrying case and made his opening pitch. I was defenseless. I knew knockoffs were wrong in principle, that it was another form of theft. I knew that pretending to be something I’m not, considering a counterfeit version of an $8000 watch, was pure snobbery. It didn’t matter. I was hooked.

The Rolex salesman wanted 400 pesos. I offered 200. He pretended to be insulted but came down to 340. I pretended to lose interest, but said 225. He handed me more watches to consider and had four or five more waiting in line for inspection. One looked better than the others. Could it be real? Maybe stolen? Maybe the master copy went into the wrong bag?

The little Rolex man called me several bad names in Spanish but sold for 250. He tucked the money away, flashed a bonus glare and tried to sell me sunglasses. Mexico lakeside is so much fun.

My Rolex still runs. It keeps good time. I seldom wear it. It looks pretentious. And, besides, it might be bait for bandits. A golfer I know was a victim of a recent restaurant robbery. The crooks had guns. They took his Rolex, but he survived the loss. It was a fake. 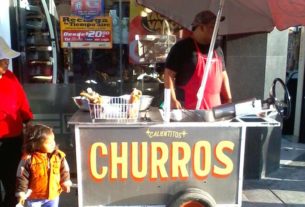