Saturdays there always seem to be three brides at the charming little church across the street from the Teatro Degollado in Guadalajara. There is a bride with her groom at the altar, a just married couple outside, accepting congratulations from friends and family, and a bride nervously waiting in the car for her wedding.

While always romantic, Mexicans pull out all the stops when planning for weddings. The well-established system of padrinos, or Godparents allows even poor families the opportunity to see their children married in the church with a wonderful party for several hundred family members and friends.

The first dating experience for most young people is the paseo or traditional stroll around the plaza on Sunday evenings. Under the watchful eye of extended family members, boys walk in one direction, and girls the other. When a young man has seen a girl he likes, he drops away from his friends to walk with her.

The Guadalajara tour guide I met on my first trip to Mexico told me how he had met his wife some 53 years before in a paseo. At that time, when he discovered her, he bought a flower. On the next round, he passed it to her. When she met him again, if she kept the flower, he could walk with her, if she returned the flower to him, he was rejected in full sight of his whole village.

Fathers exercise great control over their families and don’t allow their daughters to date until they are 15 and have had their quinceañera or coming out party. The father still wants to meet and must approve of a boy before his daughter can accept a date.

Nice girls are expected to be at home at night, even into their twenties. Girls are expected to see their novios (boyfriends) at home and to spend a great deal of their dating time in the family living room surrounded by aunts and uncles, siblings, grandparents, and a blaring TV set. According to parents, couples are eventually permitted a little private time on the stoop, but with family always near by.

Sometimes the couples move off the stoop and down the street a bit to a dark doorway or under a drooping tree, giving them additional private time.

The Engagement and Posting the Bans

Long engagements are the norm in Mexico. Girls today are generally in their mid twenties, and their grooms older when they marry. It is not unusual for a girl to receive a ring of commitment a year or so before receiving her engagement ring. Gold, silver and diamonds are common in engagement and commitment rings, as signs that the love is as pure and as strong as the materials of the ring.

The couple’s photographs and intent to marry are posted on a bulletin board in the church when they begin premarital counseling with the priest, usually a couple of months before the wedding day. This tradition, which began in the times of Charlemagne, ensures that the marriage is not improper or between persons who are already married to someone else.

The downtown historic district of Guadalajara is lined with shops filled with frothy, lacy wedding gowns and veils.

Bridesmaids and guests at Mexican weddings are freer in their choices of dresses than their sisters north of the border. It is not unusual to see attendants in a variety of styles and colors. Black is a popular color for guests and attendants. In many areas of Mexico, the indigenous still wear traditional garb for weddings and other celebrations, but at Lake Chapala, this custom no longer exists.

Mexican brides often wear a tiara. This comes from a very old Spanish tradition, which makes them “Queen for the Day.” You won’t see brides wearing pearls in Mexico. Pearls are bad luck at weddings, as they are a symbol of teardrops and grief in marriage.

To ensure food, money and passion in her marriage, a bride will sew yellow, blue and red ribbons, into her lingerie.

According to the laws of the country, a civil ceremony must take place for a couple to be legally married. The civil ceremony is generally held up to three weeks before the church wedding, and is attended by the novios (bride and groom), their parents, closest relatives and attendants.

During the civil ceremony, the couple’s vows include their decision to share or keep separate their property. At the conclusion of the lengthy ceremony all four attendants, as well as the bride and groom sign seven copies of the marriage document. Then the newlyweds mark each page with their thumbprints. Dressy street wear is worn and a dinner and a celebration follow the ceremony. Although the couple is legally married once the civil ceremony has been completed, custom (and mothers) decree that they are not to sleep together until after the wedding ceremony in the church.

On the day of the wedding mass, just before the families leave their homes for the church, their parents bless the bride and groom. When the bride arrives at the church, her parents, the priest and all of the attendants await her at the church door. The groom waits with his parents, as it is unlucky for him to see his bride before she is at the altar. The bride is escorted and given in marriage by both of her parents.

If the novios are from a wealthy family, they will select an affluent couple close to them to be the godparents of their wedding. This couple will be their spiritual, emotional and financial sponsors often assisting in the planning of the wedding with the couple, their parents and their baptism godparents.

The padrinos serve as the maid/matron of honor and best man, and often purchase the couple’s wedding rings. Family and friends, who are honored to be godparents, share the expenses of almost every facet of the wedding. There may be a godmother of the invitations, a godfather of the rum or the beer, godparents of the bouquet, padrino of the music, madrina of the cake. Other godparents supply the wineglasses for the toasts, the wedding rosary, the prayer book, embroidered pillows on which they kneel, and the baskets of recuerdos (mementos) that are presented to each of the guests to remember the day.

The church is decorated with as many white flowers as the padrino and madrino of the flowers can provide. The bride carries an elaborate bouquet, and during the ceremony, trades it for a second bouquet, which she later presents to the image of the Virgin in the church along with her prayers to the Virgin for her assistance in the future.

During the ceremony, padrinos present the couple with 13 gold or silver coins representing Jesus and the twelve apostles. Once the priest has blessed the coins, the groom showers the coins into the hands of the bride, as a sign that he will care for her during their life together, and of his unquestionable trust and confidence.

She may put them into the satin handbag she is carrying or she may place them back into the hands of the groom as a symbol of her pledge to trust him and help him with the family finances. The custom of the coins comes from ancient Rome when part of the wedding ceremony was the breaking of a silver or gold coin, with one half kept by the bride and the other by the groom. The coins generally become family heirlooms as they also represent the bride’s dowry.

When the couple kneels to say their vows, the godparents of the lazo drop the loops of a large double rosary of crystal beads, white satin cord or flowers over the shoulders of the bride and groom, to literally “tie the knot.” The figure eight design symbolizes infinity, and the tradition goes back to both early Spain when brides were often captured and bound and also to pre-Columbian Mexico where Aztecs tied the hems of their wedding tunics together.

The reception features all the best elements of a Mexican fiesta, music, good food, dancing and drinking, and a great deal of fun and laughter. The party begins when a rousing round of applause greets the newly married couple as they make their entrance into the hall. The father of the bride makes a short speech and toast, which is returned by the father of the groom.

The sign of a good Mexican wedding is the degree of inebriation of the guests. A family will sigh with great satisfaction if all the bottles are empty and all the guests a little tipsy when the party is over.

Even the poorest families manage to provide live music for a wedding party. The padrino of music is carefully selected as a family friend with enough money to hire the best band or trio. When possible, a Mariachi group plays the recessional music from the door of the church, and then plays while the couple greets their guests in front of the church, often making music for them as they promenade around the plaza. When the guests reach the reception, a trio may play for the first hour or so, until time for the first dance. Then, a band will take over for the rest of the party.

Most weddings of working people at Lake Chapala feature some of the same favorite foods seen at other parties and fiestas: grilled chicken, carne asada or birria served with rice, beans, tortillas, salad and salsa picante.

The bride and groom dance the first dance, a waltz, often with guests forming a circle or a heart around them on the dance floor. Family members in descending order of age, begin to cut in, pinning money onto the clothing of the bride and groom or tucking bills into her bag and his pockets.

In some areas, the party includes the aguinaldo or bonus, in which the groom’s tie and the bride’s garter, which the groom has removed with his teeth, are cut into tiny bits and auctioned off. Throwing the bouquet, garter, rice, groom and the apron

Rice, flower petals, soap bubbles, birdseed or confetti is often showered over the couple as they exit the church doors or as they leave the reception for their honeymoon.

All the single women and girls perform the vibora, or snake dance. The bride stands on a chair, and the groom holds her veil like an arch, as the girls sing a children’s tune while they dance under the arch, each with her hands on the next girl’s waist. When the music stops, the bride throws her bouquet over her shoulder to the next lucky bride.

In some areas, the bridesmaids’ and groom’s friends heckle the groom, singing to him ” El Mandelón,” (“The Hen Pecked Husband.”) They dress him in an apron, put a baby and a broom in his hands and sing, “Now you can’t leave to walk around alone, mandelón, mandelón.” At the conclusion of the song, the groom is picked up and tossed into the air by his buddies. Bachelors dance around the groom much like the girls did around the bride, until the groom tosses his apron to the next hen-pecked husband.

Very elaborate tiered cakes are the normal gift of the madrina of the cake. When the bride and groom prepare to cut the cake which may feature a fountain spouting champagne or colored water, the guests sing, “Queremos pastel” (We want cake). 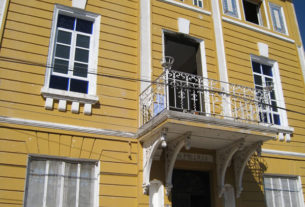 Life for singles in Mexico

Huichol art, a matter of survival II: Authenticity and commercialization