Alongside the railroad tracks at Divisidero, two Tarahumara Indian ladies silently weave pine needle baskets. Pine scent permeates the air. The tracks begin to vibrate. Soon the Chihuahua-Pacifica train screeches to a halt. For 15 minutes, tourists rush past the Indians and the maze of souvenir and burrito stalls to catch a glimpse of interlocking canyons, plunging chasms and the scraggly Urique River.

The Indian ladies have not even looked up or stopped weaving. Tarahumara are mysterious, much like the land in which they dwell. Seeing them carves memories as sharp as the canyon’s rugged crags.

This 25,000 square-mile savage landscape, buried in the Sierra Madres, surpasses the Grand Canyon by four and one-half times. It begins about 150 miles southeast of Tucson. Like an exotic dance, the Mexican landscape slowly begins to ebb and flow. The rhythm quickens as its five major canyons undulate to depths greater than 6000-feet then suddenly crescendo 10,000-feet up.

We explore this mysterious and hidden land by train, horse, car, bus and foot. Our first glimpse of the canyon is on the Chihuahua-Pacifica Railway (Chepe) ride.

The railroad, which goes from Topolabampo to Chihuahua City, took over 20 years to construct. Eighty-seven tunnels, 36 major bridges and 415 miles of track, that climb from sea level to 8,000 feet, make it one of the world’s great engineering marvels. Hanging out the train’s windows, as its skirts the canyon rim, only whets one’s appetite to see more.

The deepest of the five canyons is Urique. To view it, detrain at Bahuichivo, get someone to drive you over many miles of bumps, then hike to the rim. All that jiggling around and those clouds of dust you have been breathing are worth it. The views of the mile-deep rock formations are awesome. Nestled underneath them, alongside the Urique River, is the sleepy town of Urique.

Part of the Camino Real also runs through the area. You can ride on it, but you have to do it on top of a horse.

“If you’re not a good rider, that’s fine. Some of our horses are not so good either,” says our guide, Doug Rhodes.

The horses ascend the rocky ridges through the thick chaparral to a Tarahumara burial cave. Fifty-seven crosses cover the cave walls. Each one memorializes an Indian who perished from disease when Pancho Villa’s troops rode through this area. Their bones, strewn throughout the cave, are eerie.

That feeling continues in Creel. The blood-red bark of modroño trees cast a strange aura on the green tree-lined footpaths that pass waterfalls and rivers on our wilderness hikes. The sun warms our bodies and the spray of the 100-foot Cuzarare Falls gently pricks our skin. When the afternoon shadows grow longer, the sun’s rays cast odd silhouettes on the mountains and pine ridges.

Tarahumara homes are scattered throughout this wilderness. Two women weave belts outside a cave home decorated with petroglyphs. The house and the woman seem to blend with the environment. The Indians consider themselves an integral part of nature. Isolation enables them to preserve their centuries-old culture.

Tarahumara are best known to the outside world for their running skills. Ancestors hunted by chasing prey until the animals collapsed from exhaustion. Their running shoes were huaraches. State-of-the-art huaraches, which they now use to run 300-mile races, are made from leather thongs and abandoned tires.

“If you want a great guide, find a very old, very tuberculin Tarahumara. Then hope you are in good enough shape to keep up with him,” says Skip McWilliams, owner of the Sierra Lodge.

Tarahumara play native music on a chaporeque. Its sad, haunting sound seems to emanate from the player’s heart rather than from this crude harp-like instrument.

As the music plays, darkness creeps over the mountains. Kerosene lamps add a mystical aura to our gourmet meal. Outside a huge bonfire blazes, warming the nippy mountain air. The sky sparkles with a million stars.

Still there is another great canyon adventure ahead – the six-hour journey to the bottom. We vanish into the chasm on a passage that is sometimes gentle, other times treacherously steep. As the road winds around the twenty steep switchbacks and over rickety bridges, the desert bursts with blooms and a blur of rainbow colors. Finally, “Bienvenidos a Batopilas ” signals our arrival to the dusty little town of 800.

A boomtown in the late 19th century, Alexander Sheppard came here to mine one of the world’s largest silver strikes. The opulent lifestyle at his Hacienda de San Miguel included a grand piano. So his children could learn to play Chopin, he had 40 Indians carry it down on their backs. Some of the original stenciled designs still decorate the walls of the crumbling ruins of the block-long mansion.

The hacienda ruins are at the edge of Batopilas. The town has two streets. During rush hour it can get a little crowded. Horses, pigs, cows and dogs use it a lot. Transportation is usually the back of a pick-up. The town’s ambulance is also a pick-up, but its equipped with a couch.

There are things to do in this sleepy town. The steep, 1500-foot climb to the silver mine takes the better part of the morning. With flashlights aglow, we explore the mine. Our guide, Ana, throws several stones down the shafts.

No matter how long they bounce, she says, “It’s deeper than that.”

A leisurely walk past the Hacienda de San Miguel leads to a remote swimming hole. The sound of a nearby trickling waterfall is the musical accompaniment during a picnic lunch.

It is a three and one-half mile bumpy trek to Satevo and the Lost Cathedral. Local children sit on its steps, posing, hoping for someone to snap their picture.

Built about 400 years ago, the church is still used. Its remoteness and simplicity make it quite interesting. Rather than embracing the beliefs preached by the Jesuit missionaries, the Indians have assimilated Christian doctrines into their rituals, their traditions and this church.

Soon it is time to leave the canyon and board the bus to Chihuahua City. Cosmopolitan and charming, Chihuahua City seems the perfect place to ease back into civilization. The provincial capitol possesses a benign, small town atmosphere. Its historic Spanish architecture, like the Quinta Gameros mansion-museum, successfully intermingles with the many modern buildings.

Much is within walking distance of the beautiful old church in the heart of downtown. Known only as the Cathedral, its large plaza is a meeting place for the local residents and pigeons.

The Governor’s Palace is a short stroll from the Cathedral. Colorful murals portraying Chihuahua’s history cover its patio walls, including the exploits of its most illustrious resident, Pancho Villa.

Villa’s home, Quinta Luz, is filled with relics of the Mexican Revolution. His 1919 Dodge touring car sits in the courtyard. The rear of the car is rife with holes from the bullets that took his life.

Good food and pleasant surroundings can keep you busy for a day or two. It is a pleasant stopover before getting back to the old grind, and a stark contrast from Copper Canyon’s barren beauty and mysterious people.

Ferromex operates the Chihuahua-Pacifica Railway (Chepe). Fare from Los Mochis to Chihuahua is about $108.00 US.

Batopilas has few hotels. For reservations at the Hotel Real de Minas, call Martin Alvarez, 011-14-560-6246 and wait ten minutes for the town operator to find him.

This article was awarded a 2002 Mark Twain 2nd Prize
for Travel Writing Excellence and Editing in the Specialty Media Division
by the Midwest Travel Writers Association.
Congratulations Roberta!

The Yin And Yang Of Retiring At Lake Chapala 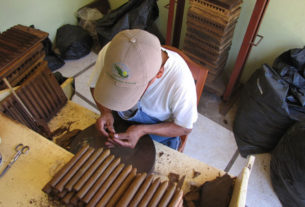 What is the mariachi?