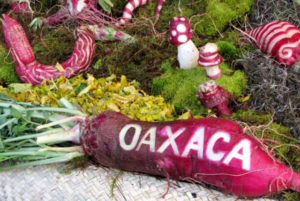 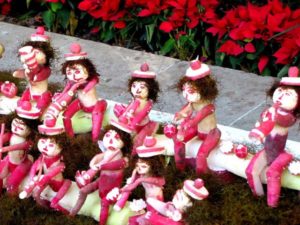 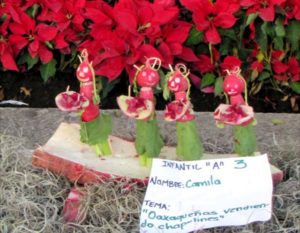 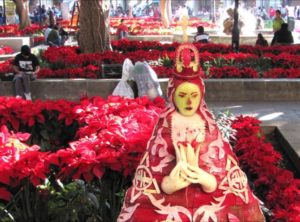 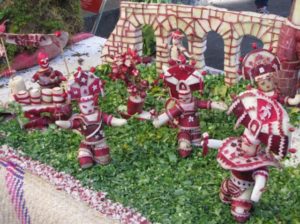 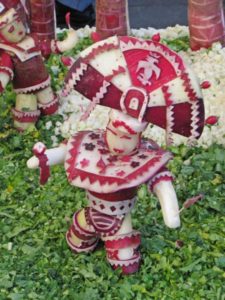 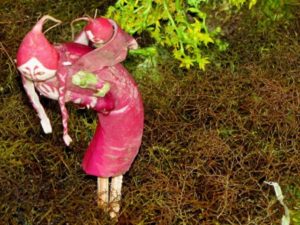 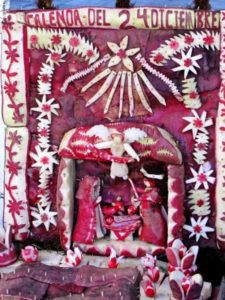 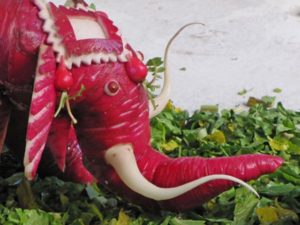 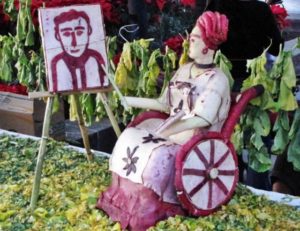 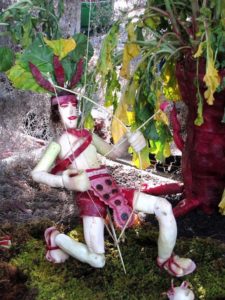 For one night of the year in Oaxaca, Mexico, the Raphanus sativus, or radish as it is more commonly known, escapes its destiny as root vegetable side dish and becomes art. Thousands upon thousands of radish revelers turn out on December 23rd to check out the newest vegetable-turned-art creations on display in the Zocalo. The artists have only a few days to complete their short-lived masterpieces, working frantically to carve figurines impressive enough to land them the 15,000 peso grand cash prize offered. Tiny scenes depicting life in Oaxaca and the surrounding areas are meticulously fashioned out of radishes of all sizes and shapes. Corn husk shaping, known locally as totomoxtle, and dried flower art (flor inmortal) accompany the ravishing radish creations, filling the main square with tiny bursts of color.

The Night of the Radishes has been an official event since 1897, but the tradition was first started by a Spanish monk in the 16th century. The radish was introduced to the indigenous populations by the newly arrived Spaniards and incorporated into their diets. The monk encouraged the local farmers to carve interesting figures into the radishes as a sales gimmick to make them more attractive to buyers for the December markets. The gimmick clearly worked and soon people began buying the radishes not to eat, but to use as centerpieces for Christmas dinner. Later it became a competition, as it is today, and has lasted for hundreds of years, continuing to draw huge crowds.

The radishes come in all sizes, some up to 50 centimeters in length and weighing as much as 3 kilograms. Most are heavily fertilized, chemically treated and left in the ground long after the normal harvesting time, making them unacceptable for human consumption. They are grown in an allocated area near El Tequio Park. where they are then harvested and given to the artists around December 18th. Relying only on their imagination, carving skills and their vegetable muses, the artists must design and complete sculptures worthy of being included in this festival. Often the radishes themselves are the best inspiration; their unusual shapes and features are the rough draft of what the final creation will be.

There are different categories to enter, allowing for less experienced artisans and children to partake in the competition as well. This adds a touch of humor and encourages the younger generation to be involved in traditional folk art. Some of the most interesting creations spring from the minds of the little oaxaqueños — children — and it is good practice for when they can later enter in the adult categories.

Starting in the early afternoon of December 23rd, the setup begins. Long tables line the perimeter of the Zocalo and a viewing platform three steps high is put on the outer side of the tables. The tiny creations made of corn husk, dried flowers and of course radishes fill the tables, telling the histories and legends of Oaxaca and Mexico. Frida Kahlo sits in a radish wheelchair painting a radish portrait of Diego Rivera. La Llorona sheds perishable tears and Benito Juarez famous quote “El respeto al derecho ajeno es la paz” (respect for the rights of others is peace) is written out of, you guessed it, radish. Las Vírgenes: Guadalupe, Juquila, and La Soledad beam in red vegetable splendor, graciously greeting those who have come from far and wide to see them. There are flowers, babies, celebrities, animals, musicians, and whole scenes of important Oaxaca events like the Guelaguetza and Day of the Dead, all meticulously carved from radishes.

The totomoxtle and flor inmortal art deserve high praise for their creative entries as well. Colorful figurines make the spectators both giggle and gawk in amazement at how such an elaborate scene can be constructed out of dead flowers and corn husks. Tiny dancers with corn silk hair strut their stuff showing visitors a miniature example of traditional dances of the area, including the Danza de la Pluma (The Feather Dance), The Pineapple Harvest Dance and The Chilena from the Costa Chica. Flowery phrases and flor inmortal tapestries give their own insight into Oaxacan culture, depicting important religious figures and historical quotes.

The lineup starts at around 4 p.m., spilling out of the Zocalo and snaking around the block, quickly growing longer and wider. A wait time of 4 to 5 hours to see the exhibit is not unusual and it is advised to go early. La Noche de Rabanos does not last long. At 9 p.m., the winners are announced and the display tables start to be dismantled. The festive atmosphere does not die off, however. Music, fireworks and illumination shows on the Cathedral keep the main square full of activity. Carts selling buñuelos (thin pastries, fried and coated with syrup sold around Christmas time) and esquites (corn in a cup with cream, lemon, chili pepper and cheese) add scent and flavor to the party as families and tourists mingle and enjoy the festive atmosphere.

La Noche de los Rabanos is a fun and quirky event to get you into the Oaxacan Christmas spirit. If seeing the Baby Jesus carved out of a radish doesn’t kindle your Yuletide fire, then nothing will. 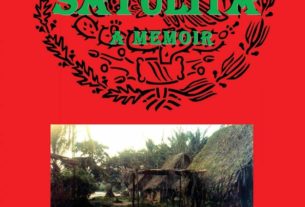