It seems that one can never take anything for granted in the academic world, at least because there is always someone somewhere waiting to contradict everything that has been said previously. This is especially true of revisionist history.

Of course new evidence and different ways of interpreting the “facts” of history may justify revising standard historical accounts. However, one hopes that at least some thread of consistency may be found in a particular historical interpretation; that some justifiable confidence can be placed in a given historical record; and that the inherent bias of the historian or researcher will not completely obscure the “truth,” however one defines that elusive term.

However, when it comes to the hapless Aztecs of ancient Mexico, it is open season. The fate of the Aztec empire at the hands of the Spanish Conquistadores is so well-known, even among non-specialists, that almost anyone can be an expert with a new theory or re-interpretation of Aztec society and culture.

Much controversy has recently arisen over several collections of poems in Nahuatl, in particular the Cantares Mexicanos, a manuscript in the National Library of Mexico.

These poems are of particular importance because they appear to support a much different picture of the ancient Aztecs than we get from the tzompantli (skull rack) in the Aztec capital of Tenochtitlán or the horrendous accounts of Aztec human sacrifice left to us by the early Spanish soldiers and missionaries.

In place of the savage barbarian ever posed ready with obsidian knife in hand ready to plunge into the breast of yet another unfortunate sacrificial victim, we have, according to the orthodox interpretation, philosopher-kings and poets meeting in order to discuss the real meaning of “Flower and Song” (in Xochitl in Cuicatl), i.e. Poetry, and seek the “truth” here on earth. This interpretation advanced by two prominent Mexican scholars, A. Garibay and his student M. Leon-Portilla, is based primarily on the Nahuatl poems in the Cantares Mexicanos and the Pomar Manuscript of 1582.

This interpretation has been seriously challenged. In 2004 G. Payas delivered a scathing indictment of the orthodox interpretation of Aztec literature (“Translation in Historiography: The Garibay/Leon-Portilla Complex and the Making of a Pre-Hispanic Past, Meta: journal des traducteurs/Meta: Translators” Journal, vol. 49: no.3, 2004,p. 544-561).

In brief, Payas accused Garibay and Leon-Portilla of purposely creating a literature for the Aztecs by their slanted politically-motivated translations of the Nahuatl texts. Others have joined the ranks, including the Internet Encyclopedia of Philosophy, which states unequivocally that the Aztecs did not have any concept of “art for art’s sake,” and therefore it is potentially misleading to translate and interpret the recurring phrase “In Xochitl in Cuicatl” as “poetry;” rather, it is said, the phrase refers to artistic activity in general, such as composing and performing song-poems.

Since the Cantares Mexicanos comprises precisely poems that were obviously meant to be performed in a musical style, the philosophical subtlety of this fine distinction escapes me. A recent translator of the Cantares, J. Bierhorst, thinks the phrase In Xochitl in Cuicatl refers not to poetry but to songs intended to summon the spirits of dead Aztec warriors to return to earth to help their beleaguered descendants under Spanish rule. Some of these commentators seem unwilling to credit the Aztecs with any spark of originality or speculative ability.

Rather than reiterate all the charges and countercharges in this literary war of words I propose a different approach by way of analogy. It is undeniably true that distortions of various magnitudes have crept into our written sources from the time of the Conquest in the 16th century up until the present. However, if the orthodox interpretation is so wrong and the correct interpretation of classical Aztec society and culture is still hidden so deeply in the mass of historical works by Spanish missionaries and others, native codices, and official colonial documents, then perhaps we should look for parallel examples that might at least help to explain how (allegedly) pre-Hispanic texts such as the Cantares Mexicanos managed to get into writing. This might help a little in settling the matter of the authenticity of the poems.

Among the charges brought against the orthodox interpretation of Aztec literature is that Garibay was a “Christian Humanist” who saw Nahuatl literature in the wider context of Greek, Hebraic, and Hindu traditions (as if this were a grievous fault). According to Payas, Garibay saw an analogy between Classical Greek literature and Nahuatl and used it to justify his own methods and interpretations. In short, Garibay forced the Nahuatl texts into a contrived classical format and his pupil Leon-Portilla then interpreted the texts to correspond with his preconceived notion of the Aztec mode of thought.

Academic controversy is nothing new and this one reminds me of the old Homeric controversy between the Analysts and the Unitarians. Are the Homeric epics, the Iliad and Odyssey, the work of a single poet or a committee of hack composers, each throwing in their own little contribution? One Homeric question at least seems relevant to the Cantares Mexicanos — namely, the problem of the transmission of oral compositions into a written form. Were these Nahuatl poems composed before the Conquest and somehow preserved more or less in their original form? Or were they composed after the Conquest and so reflect Christian values? Or were they simply a reaction against Spanish domination, as J. Bierhorst thinks? In following articles in this series we shall attempt to find some answers.

As previously noted, it all got started with A. Garibay’s translations and interpretations of the Cantares Mexicanos and other poems in Nahuatl. In Epica Nahuatl (Mexico, 1945), Garibay classified what he regarded as Aztec epic poems, or at least epic traditions, into cycles reminiscent of the Greek epic cycles. These he named Poemas Sagradas, Ciclo Tenochca, Ciclo Tezcocano, and Ciclo Tlaxcalteca. He based his classification on a wide variety of sources, including references in non-Nahuatl sources and, in his Historia de la Literatura Nahuatl (Mexico, 1971, 275-329), he devoted a whole chapter to epic poetry in which he outlined in some detail the actual texts on which he based his comparative study of what he referred to as Epica Nahuatl (Nahuatl Epic).

The cyclic poets dealt with two main themes, the Trojan Cycle, which completed the heroic story from the beginning of the world to the end of the traditional heroic period, and the Theban Cycle, which told the story of Oedipus’ double curse on his two sons with dire consequences for the royal house of Thebes. The Epic Canon included the most important epic poets, Homer, Hesiod, Peisander, Panyasis, and Antimachus. Details cannot be given here, but I simply wish to show where Garibay probably got his ideas about Nahuatl epic cycles.

With regard to native chronicles about the Conquest of Mexico in 1521 Leon-Portilla wrote: “It is no exaggeration to say that the dramatic force in some of these accounts is comparable only to that of the great classical epics. Whereas Homer in the Iliad recalled so vividly many tragic scenes during the fall of Troy, the native writers, who witnessed the struggle and the humiliation, also knew how to bring out the most dramatic moments of the Conquest and the events which followed it (Miguel Leon-Portilla, Pre-Columbian Literatures of Mexico, Norman, Oklahoma, 1969, p.150).

The main purpose of this present comparative study is to ascertain the extent to which Garibay (and later Leon-Portilla) were justified in setting Nahuatl literature beside classical Greek models, such as the Iliad and the Odyssey. It would be overly optimistic to expect that the comparative approach to the problem of the authenticity of texts in Nahuatl and Mayan can solve all the problems and establish with certainty their pre-Hispanic origin. The aim here is more modest.

Arguments from analogy can only suggest plausible ways in which the Iliad and Odyssey,and the Cantares Mexicanos may have been preserved and passed down from the oral to the written tradition. However, with the accumulation of sound evidence, we may be a little more certain that we are indeed hearing authentic voices from ancient Mexico unadulterated by Spanish or Christian influence. 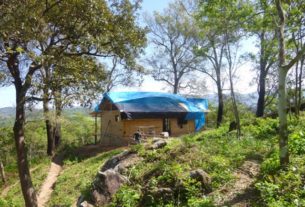