We were lucky: we managed to visit the famous pyramids of Teotihuacan on a rare sunny winter’s day, when Mexico City’s air was clear and, from our bus, you could actually see the snow capped volcano of Popocatepetl some forty miles away. I should explain that it was Christmas Day, a time of year when many people leave Mexico City and take their automobiles with them. A light breeze was blowing. Conditions couldn’t have been better. The morning newspapers even reported that Popo had put on a bit of a show the previous evening with a twenty minute eruption that scared everyone in the area. The unexpected sight of the volcano only whetted our appetites for the pyramids.

One other advantage of going on Christmas day was that many other people went, too. While we tourists generally don’t welcome crowds, the thought struck me that with the hordes who were there that day, this is how Teotihuacan might have looked in its glory days, as a bustling place with people buying and selling, eating and drinking, chatting and strolling in the sunshine and generally enjoying themselves. We sometime have a tendency to think of these archaeological sites as solemn places of interminable ceremonies and rituals. But the truth is that for hundreds of years Teotihuacan was actually a living, breathing, vibrant city, the center of its world, rivaling Rome and Athens in size and importance.

It must have been quite an attraction then, around 600 A.D., when it covered 40 square kilometers and had a population of some 200,000 — as much a magnet for bright, creative, ambitious people as, say, New York or London today. It lay in the center of a huge area that covers most of present-day Mexico. Three rivers flowed across the plain towards what was then nearby Lake Texcoco. However, the ecology of the area has changed drastically since. The Spanish arrived and felled the abundant cedar and pine forests to provide timber for building. Agave and cactus have now taken over. The barren plain you see today is not how it looked then.

Dominating everything at Teotihuacan is the Pyramid of the Sun. The climb up the 248 steps to the top isn’t that strenuous and the view is worth the effort. There are lots of places to rest and admire the scenery. You can stand there and look down on the crowds strolling along the Avenue of the Dead and imagine how it might have looked say, 1500 years ago when the city was at its peak. The Avenue of the Dead was at one time lined with temples and dwellings. The walls were painted with pictures of animals and mythological creatures. Only fragments of those structures remain today to tease the imagination. The Avenue of the Dead was at one time a very long thoroughfare but only a short stretch, between the Pyramid of the Sun and the Pyramid of the Moon, has been excavated.

Pyramid of the Sun

The people who founded the city arrived on that high plain about 500 B.C. Little is actually known about them and their origins. Even less is known about why their civilization faded. The evidence seems to suggest that the decline was gradual, over two or three centuries, due to overpopulation, depletion of resources. In the end, the city was deliberately burned and abandoned.

Construction of the Pyramid of the Sun was started about 100 B.C. It’s the third largest pyramid in the world. A temple once crowned the summit but is no longer there. Great care obviously went into the planning of the city. All of the buildings were laid out to coincide with celestial movements. Ceremonial rituals were timed with the appearance of Venus in the morning and night sky. The front wall of the Pyramid of the Sun faces exactly the place on the horizon where the sun sets twice annually. Almost all other locations on the site are related to celestial points and had religious significance. This was a civilization with a profound knowledge of astronomy and the calendar. The rituals of the high priests took place on top of the pyramids and the populace observed from the great plaza below.

Teotihuacan is one of the major tourist attractions in Mexico City — a place that’s full of attractions. I urge you to go. It’s easy to get to. There are decent eating places out there and lots to see and do. There’s a museum and a cultural center and plenty of places to buy souvenirs. And if you’re feeling energetic, try the climb up to the top of either pyramid. At the very summit of the Pyramid of the Sun there’s a metal spike sticking up an inch or so out of the stone. Do what everyone did when we were up there — hold on to it and let the pyramid’s energy flow into your body.

If you go with an experienced guide, one who knows his or her stuff, there’s lots to learn and see and think about. But if you just want to visit and take in the ambiance of one of the world’s great archaeological sites, then Teotihuacan is still enjoyable and rewarding.

One last suggestion: do what we did and go at Christmas. Easter is also recommended. It’s the other time of year when the locals leave town and take their vehicles with them. The air will be clearer and you’ll be able to enjoy the magnificent view of the surrounding plain and, if you’re real lucky, Popocatepetl, too. 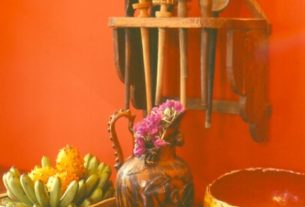 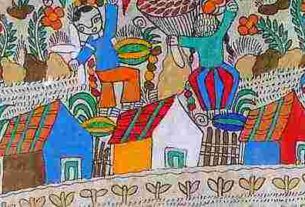 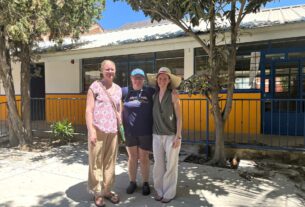