Walking through Coyoacan, I imagine how it must have looked in the early 1900s, when Frida Kahlo was born in the now-famous “Blue House.” At that time, Coyoacan was a small country town. Even though she and Diego Rivera shared a city home, they frequented her birthplace often, and it was here that she chose to spend her last days. Her homestead, now a museum, keeps the legendary and volatile love affair between these two artists alive.

Today, Mexico City has sprawled to encompass the once-pastoral countryside, but as I stroll along Coyoacan’s tree-lined streets filled with colonial home and museums, I find my thoughts drifting back in time. An abundance of cafes, boutiques, restaurants and art studios create a charming ambiance. Coyoacan (which means coyote) is a must-see during any trip to Mexico City.

Coyoacan is a walking neighborhood. You can get to the area via the metro (Viveros stop) and walk around, keeping in mind that via the metro, you add a few kilometers to your travels. If you’d rather not do that much walking, you can drive there (as I did) and walk in several directions from the central plaza.

Following is a short description of the sites, grouped together according to the amount of time needed to see them. I visited all the sites that are indicated with a (*) . I spent about 6 hours and walked about 7 kilometers.

The main square in Coyoacan is the Plaza Hidalgo (*) and Jardin Centenario (*). These adjoined areas are in the center of historical Coyoacan and form a zocalo with labyrinth-style hedges, fountains, trees and benches. This plaza, usually filled with people and vendors, is a prime place for people watching. Along the edge of the two adjoining squares are restaurants, cafes and bars, many with outside seating.

On the north edge of Plaza Hidalgo is the Castle of Cortes (*), where the Spanish conquistador Cortes lived when woods and water separated this area from the Mexico City zocalo. Besides being the former residence of this famous conqueror, it was also used by the Spanish in a variety of ways. Now, it houses the offices of the Delegate for Coyoacan and the area’s tourist office (*). The folks in the tourist office don’t speak English, but they will give you maps and touring information. Ask for a detailed map of the neighborhood.

The most prominent feature of the plaza area is the Parroquia de San Juan Bautista (*). This church dates back to 16th century and the frescoes on the ceiling, and the artwork throughout are amazingly well-preserved. If you visit the church on a Friday, you may even see it decorated with flowers for a weekend wedding.

Behind the church, there’s a great café, La Mucca Espresso Café (*), with outside seating, an innovative menu, strong coffee and (my favorite) chocolate cake. There are several stores around the plaza as well and an interesting art shop across the street from the Portada. For more shopping, head south of the church (exiting the front doors) down Carrillo Puerto. Another site in this area is the Museo Nacional de Culturas Populares, adjacent to the Plaza Hidalgo on Avenida Hidalgo.

If you’ve only got three hours, after seeing the plaza, the church and a few nearby sites, it’s time to walk the six short blocks to the Frida Kahlo (*) museum, known as the Blue House. To get there, head north on Calle Allende, which is directly behind the Castle of Cortez/Delegation Offices. Leaving the tourist office, you would take a left and then another left onto Calle Allende. This street changes names as it extends north, passing the Coyoacan mercado (*). Most of the south side of the mercado is filled with a few fresh food stands, and lots and lots of diner-style eateries, for seasoned travelers or culinary adventurers.

Pinatas hanging from every inch of the ceiling give the place a festive feel. North through the mercado, there are vendors of goods, wares and handicrafts, which are reputedly more expensive than elsewhere, just because it’s Coyoacan. After you enter the mercado from the southwest, you’ll notice an open-air restaurant that serves fresh seafood. I think it’s called the Jardin del Pulpo. It smelled great and was packed with people when I was there. Of course, it’s always a good idea to be wary of new foods and restaurants, but since I believe the locals know where to go for the good food, when I baptize my stomach Mexican, that’s one place I’m going to try.

North on Allende, about 3 blocks beyond the mercado, on the corner of Allende and Londres, is a blue house with dark red trim — the Blue House/Frida Kahlo Museum. This house was the birthplace, periodic residence and death place of the famous Mexican artista Frida Kahlo. It costs $20 pesos to enter. The hours are 10:00 a.m. to 5:30 p.m., closed on Mondays.

The house has been restored and the rooms house artwork of Kahlo, Rivera and other famous Mexican artists, including the ancient Aztec, Maya and Olmec artists. There are two rooms dedicated to Kahlo, one for her paintings and the other for her clothing, jewelry and memorabilia of her tumultuous relationship with Rivera. There is also a room dedicated to Rivera. Since there is little detail offered about any of these exhibits, I suggest reviewing the history on Kahlo beforehand.

If you’ve got more than three hours and your legs can handle another 3 kilometers, you can go back to the main plaza and pass west through the Portada Atrial, heading down Calle Francisco Sosa (*). Along this street are impressive homes and estates. I actually give Coyoacan a “peek factor” of about 3 out of 10 because unfortunately, most of the homes are behind walls and gates. About 3/4 of a kilometer on Calle Sosa, you’ll come to a charming little park built up around the Plaza y Templo de Santa Catarina (*). The templo may be closed to the public except on Saturdays and Sundays, when it opens for religious services and classes. Around this plaza are shops and restaurants.

As you are looking out from the front of the Templo de Santa Catarina, you’ll see a small street that jogs west from the far right corner of the plaza — this is Calle Progresso. If you take this for about 2-3 blocks, you’ll find the Viveros de Coyoacan (*), a nature preserve/park. Walking along the edge of the park, you’ll come to the main entrance just before Avenida Universidad.

The Viveros looks like a big nursery. Near the entrance are rows of plants and trees being cultivated for replanting. Near the back of the park are more mature, wooded areas and a mercado for plants — but you must exit the Viveros and go around to access these stores. Inside the Viveros, you can follow a dirt road around the entire circumference of the park, a total distance of about 2 kilometers There are joggers, walkers, student groups and a lot of squirrels. A word of warning: I’ve been told that the Viveros is not a place to take any valuables nor is it a good place to visit in the evening. However, it’s a rare getaway from the crowds of Mexico City.

If you’re heading back to Plaza Hidalgo, follow the edge of the Viveros east until you reach Calle Melchor Ocampo — it’s a busy one-way street and hard to miss. When you hit this intersection, jog one street north (or left) to Belisario Dominguez (*) and follow this back to the zocalo. It’s another great street for looking at houses and by taking this route, you’re not backtracking over terrain already discovered. Or, if you’re heading home after the Viveros, you can catch the metro just outside the park on Av. Universidad (Metro: Viveros).

Once you’ve done the first two spurs, you’ve probably walked about 5 kilometers. The reason I recommended the spur to the Viveros as my second favorite is because the Viveros is very unique for this city, and moreover, I love wandering through residential neighborhoods — especially neighborhoods where I can stop for an ice cream when I get hungry. If you decide to do the Conchita spur (described below), skipping the Viveros spur, you would be done in about 4 hours and you’d cover about 2-3 kilometers.

The Conchita spur takes you to a little park about three blocks from the Plaza Hidalgo. Behind the Parroquia de San Juan Bautista (the church in the zocalo) is a diagonal street called Calle Higuera. Follow Calle Higuera for about 3 blocks and you’ll find yourself at a picturesque plaza and church called Plaza de la Conchita (*). Across the street from the plaza is a red house, Casa Colorada (*), where Cortes’ mistress took residence and where Cortes’ wife was murdered. Unfortunately, it’s now a private home and not open to the public. Another block down Higuera from the Plaza de la Cochita is the Jardin Frida Kahlo. 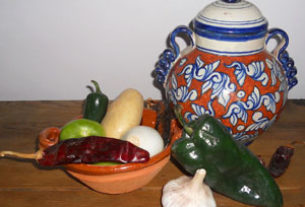