Mathieu de Fossey was born in France in 1805, and educated in Dijon. Politically disillusioned following the end of the reign of King Charles X in 1830, Fossey responded enthusiastically to an intriguing pamphlet he read publicising the challenges and opportunities for French settlers in the Isthmus of Tehuantepec, Mexico.

At that time, most Europeans had only a scanty knowledge of the New World. Emigrating there not only allowed individuals like Fossey to escape from Europe, it also offered them the chance to help develop what was then perceived (from a European perspective) as a backward part of the world, unable to progress because of its sizeable indigenous population.

From a Mexican point of view, large swathes of its vast territory (since much reduced), including Texas, Arizona, New Mexico and the Californias in the north, as well as the strategically important Isthmus of Tehuantepec in the south, were almost uninhabited. Immigration to help settle these areas was seen as vital to national security.

Mattieu de Fossey arrived in Mexico on February 13, 1831, one member of a large group of French colonists intent on making a new life for themselves. Their initial settlement was at Coatzacoalcos, today a major oil-refining center. When the French colony failed, partly because of its organizers’ unrealistic promises and claims, Fossey moved to Veracruz and later to Mexico City. Some of his fellow settlers succeeded in establishing French communities in Nautla and Jicaltepec, two settlements on the Gulf coast plain between Veracruz and Tuxpan; others returned to France.

The failure of the Coatzacoalcos experiment did not alter Fossey’s view that European, especially French, settlers were absoutely essential for Mexico’s political stability and for its economic and cultural development.

Fossey was certainly not the typical European traveler in Mexico; he was neither businessman, artist, diplomat nor tourist. He moved from city to city and worked as a teacher, including a brief stint as director of the Colegio Francés in Mexico City.

By 1837, he was in Oaxaca, and avoided deportation when Mexico expelled many French citizens following France’s military intervention (now better known as The Pastry War) in 1838. In 1843, Fossey moved to Mexico City after a short and disappointing trip back to France. Later, he organized teacher training in Guanajuato, before being appointed to a similar post in Colima. After three years residence in the latter city, he had still not been able to take up the post due to political conflicts.

But his magnum opus was Le Mexique (1857), one of the most interesting of the many fine books written about Mexico in the nineteenth century. Despite initial reservations, Fossey grew to love Mexico, regarding it as both an enigma and a challenge. He felt that no society could be fully understood without considering its natural environment. As a result, Le Mexique contains excellent descriptions of climate, geology, volcanoes, the fertility of the land and similar observations. He also suggested that nature’s awesome and uncontrollable tectonic forces would inevitably leave their mark on the psychology of the nation’s inhabitants.

Fossey was an astute observer of social differences. He recognised, for instance, that as far as the creoles or criollos (the Mexico-born offspring of Spanish parents) were concerned, they, and only they, were the ones who held the political reins, and that they would do virtually anything to ensure that the sitation remained unchanged.

Throughout his life, though, Fossey considered that Mexico was unable to govern itself adequately and would benefit from a political alliance with France to offset the potential dangers attached to its relationship with an expansionist United States. His beliefs had no doubt been strengthened by the U.S. invasion of Mexico in 1847.

Later in the century, France also invaded. In 1862, France’s first efforts were temporarily beaten back at the Battle of Puebla, fought on May 5, the Cinco de Mayo, hence the national holiday. But France eventually prevailed and Napoleon III was able to put Archduke Maximilian of Habsburg on the Throne of Mexico for a short time, from 1864 to 1867. Under pressure from liberal elements within Mexico and from the United States, the French forces withdrew. Maximilan’s position became untenable; President Benito Juárez refused to offer him a pardon, and Maximilan was executed in Querétaro in 1867. During Maximilian’s brief, but ill-fated, power-trip, Mathieu de Fossey left Mexico, returning in 1866 to France, where he died four years later.

Towards the end of the nineteenth century, Mexico’s links to France were once again strengthened after Porfirio Díaz consolidated his power. Díaz was a strong advocate of foreign investment and actively courted foreign firms, as well as supporting numerous initiatives introducing foreign culture into Mexico, helping to shape (for better or worse) the fascinating country it is today. 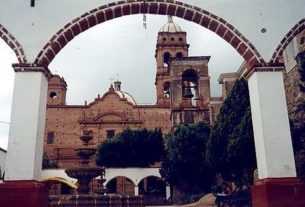