According to the reports of the first Europeans to visit the New World, slavery was almost universal in what is now Mexico and Central America. Theoretically, with the arrival of Europeans, that should have changed.

In 1493 Pope Alexander VI, while granting Spain the right to colonize the New World, mandated that the indigenous people be converted to Catholicism and prohibited their enslavement. However, he added a “catch 22” by going on to say that those who did not accept Christianity or reverted to their old religion, should be punished and could be enslaved. More positively, in 1500, Queen Isabella of Spain had expressly ordered, “all the Indians of the Spaniards were to be free from slavery.” This order had no ifs or buts. When she died in 1504, her will instructed her successors to continue these policies.

Thus, when in 1519 Cortes and the Conquistadors invaded Mexico, both Spanish and Papal Law seemingly protected the Indians from enslavement. It is not surprising that Cortes, whose very invasion of Mexico was an illegal rebellion against the order of his superior, the Governor of Cuba, ignored the order of the Queen, and used the aforementioned “catch 22” to remain in compliance with the Papal order. As they moved toward Tenochtitlan, the Spaniards went through the motions of converting the Indians but offered them no religious instruction. The erection of a Cross, a speech outlining the virtues of Christianity by La Malinche and the destruction of the local idols was the standard procedure.

It was not until 1524, after the Aztecs had been conquered and enslaved, that 10 Franciscan Priests and 2 lay brothers arrived. Now, real religious instruction was offered to the Indians. In 1526, 12 Dominicans followed them. The first Jesuits who ultimately were to carry the main burden of religious instruction, did not arrive until 1572. Thus, in 1521 when Cortes gave his followers vast tracts of land called encomiendas, all indigenous people living within the boundaries of these land grants were bound to the land as slaves. Simply baptized, without follow up, it was easy to claim they had reverted to the worship of their old Gods. Thus the ecomienderos could claim they were in compliance with the second part of the Pope’s directive. Recognized by the Spanish Crown as the military governor of New Spain, largely unsupervised, Cortes ran Nueva Espagna until 1526.

The first person to challenge this illegal enslavement was Father Bartoleme de las Casas. Long an opponent of slavery, he had fought against, it in both Santo Domingo and Cuba with little success, before coming to Mexico. Ironically, his proposed solution to enslavement of indigenous people was to import black slaves from Africa. Some effort was made to do this but the Portuguese who controlled the slave trade charged high prices and the number of black slaves available was not sufficient to meet the needs of the colony. Records indicate that about 6000 African slaves reached Mexico.

Those who did arrive remained largely in the Vera Cruz area and worked mostly in the sugar cane fields and factories. Perhaps this indicates that the Indians who lived near Vera Cruz, the first permanent Spanish settlement, had indeed received religious instruction in addition to baptism. Returning to Spain, in 1542 de Las Casas persuaded Emperor Charles V to promulgate “New Laws” that once again outlawed slavery. Returning to Santo Domingo, he was unable to gain acceptance for these laws. Appointed Bishop of Chiapas, he returned to Mexico. Here too, he met with no success.

Actually, the economy of Nueva España depended almost entirely on slave labor. Agriculture and mining were labor intensive and need young, strong bodies. The recruiting of young male immigrants in Spain was impossible. The country was involved in European wars and the Army took all the able bodied young men who might have been willing to seek their fortune in the new world. After 1535 when the first Viceroy, Antonio de Mendoza had restored order to the Colony, some immigration started. The first to come in any number were “Conversos.” Forcibly baptized Jews, they were mostly doctors, lawyers, teachers and business men who were fleeing the Inquisition. They brought much need skills but did not replace slaves. 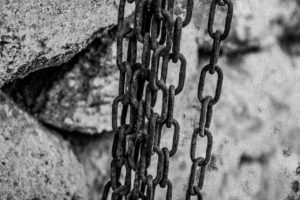 In the final analysis, while Bartoleme de las Casas failed to end slavery, he was the first voice within the Church to speak out against it and set a precedent that it was the duty of the Church to protect the Indians. Due to his influence, Juan de Zumarraga, the first Archbishop of Mexico who arrived in 1528 proclaimed himself as “Protector of the Indians. ” He had recognized the impossibility of ending slavery. His approach was to attempt to regulate it. Cortes had gone back to Spain. An Audiencia, a court, dominated by Nuneo de Guzman, a bitter enemy of Cortes, was running the colony. He had launched a program of extortion and enslavement against the Indians. Spaniards who remained loyal to Cortes were also persecuted. It was not until Cortes returned to the colony in 1530, that Guzman was ousted and a second Audiencia took over. With this new Court in place, the treatment of the Indians improved although slavery was still their lot. Now, Archbishop Zumarraga and Vasco de Quiroga who he had appointed Bishop of Michoacan, brought churches, schools and hospitals to the indigenous people both enslaved on ecomiendas, the original land grants made to the Conquistadors and those still free and living in their own villages.

It was the new Viceroy who actually did the most for the indigenous people. While he recognized the impossibility of abolishing existing slavery, he set some standards for their treatment. No Indian, slave or otherwise could be forced to carry a load of more than 100 lbs. To protect the supposedly “free” Indians employed in the mines, government officials were appointed to collect and distribute their wages. In some cases a local priest performed this duty.

The system set up by the new colonial government to run the colony was based on strong municipal governments. Like other cities, native municipalities were also recognized as semi-autonomous units, with Indian officials handling local matters under the supervision of appointed Spaniards. Soon, the descendants of the original Conquistadors began to demand the same kind of land-grants received by their parents. To protect the remaining Indian villages from their encroachment, the Viceroy now set up the Ejido system. It granted title to land to a tribe, a village, a clan or even an extended family. The land was designated to be used solely for agriculture. It could not be divided and sold by individual Ejidoistas. This protection lasted until 1856, long after Mexico gained it’s Independence from Spain. Ironically, it was the Liberal Party, headed by Benito Juarez, himself an Indian, that destroyed the system. There can be little doubt that it was this system that slowed down the enslavement of the Indians.

Under the Viceroys, “forced labor” to build roads, rather than slavery became the lot of the “free” indigenous people. In a sense, it was a form of tribute exacted by the Colonial Government in lieu of cash payment of taxes. Due to epidemics of smallpox, first in 1520 and again in 1545, 1576 and 1629, by 1630 the Indian population had shrunk to less than 800,000 from an estimated 10 to 12 million in the days before the Conquest. The majority of those who died were slaves who were in close contact with Europeans. The survival rate of those who lived in Indian villages or on Ejidos was much higher. A change from raising crops to raising cattle, much less labor intensive, also slowed the need for slaves. Now the Indian population grew rapidly. While population figures are not wholly reliable, in 1650 Mexico’s total population was recorded at about 1.7 million. 1.3 million were Indians.

Now government controlled labor drafts called repartimientos, rather than slaves, provided workers to the Spanish-owned estates and mines at salaries set by the government. While the Plan of Iguala, proposed by Augustin de Iturbe in 1820 had abolished slavery, it was not until 1824 that a Constitution was adopted that actually freed them. Even so, it was not until 1829 that the last slaves were freed. Slavery did survive in the part of Mexico that is now Texas. Indeed, Mexican efforts to free slaves played an important role in the formation of the Republic of Texas. It was largely fueled by the desire of ” Gringo” slave owners to retain their chattels

Slavery in Colonial Mexico was quite different from that in the American South. The bulk of those enslaved remained on the land where they were born. There was no large scale buying and selling of Indian slaves. Even the blacks imported from Africa, like the Indians, were incorporated into the encomienda system that bound them and their descendants to a particular plantation or hacienda. Over 75 percent of modern Mexico’s population, have at least one Indian or Mulatto ancestor. The vast majority of them were slaves. Ironically, it is the Indians, never enslaved, who retreated into largely inaccessible mountain and jungle areas, that today make up the most destitute and deprived population in modern Mexico.

The rise and almost fall of the hot dog in Mexico

4 thoughts on “Slavery in Mexico”