The whirling skirts of a dancer from the Ballet Folklorico at the Teatro Degollado in Guadalajara fill this month’s cover. The costume belongs to the Jalisco segment of the show, which features traditional dances from all regions of Mexico, now in its 37th consecutive year.

Following the Sunday morning spectacle, I spoke with Carlos Ochoa, Director General of the Suplemento dance troupe for the last quarter century. He put together the two-hour program, made up of nearly 30 different vignettes and choreography from all parts of the country, which is performed one Sunday a month by his understudy company. The other three Sundays, the Oficial company performs a different show under the direction of Fernando Delgadillo López.

The University of Guadalajara supports both companies, supplemented by the weekly shows given to the public and national and international tours of the Ballet Folklorico, which has the reputation of being the best in Mexico.

To get some background, we spoke to former foklorico teacher, Bertha Alicia Leal of Guadalajara, who studied the art form in Nayarit in her youth and taught youngsters afterwards from the age of 5 years old, the basic steps of these regional dances.

She relates that though Folkorico began evolving after the Conquest, each area’s traditional steps and costumes are unique. Learning these dances is a means of preserving the essence of the distinct cultures of each region of Mexico and perpetuating them for the benefit of future generations.

Even the styles of music are tipico: In Vera Cruz, for example, they use a lot of marimba in their music. In Folklorico Norteño, you will hear accordian featured, while in Jalisco, the traditional music is Mariachi.

For Bertha, the Vera Cruz costumes and dance have always held a special charm; the dresses are refined, with lots of white lace and adornments. Even the shoes are white.

The costumes of Jalisco are among the most colorful. The skirts are made up of tiers of brightly-colored ribbons, and a single skirt can contain close to 7 meters of fabric. When in motion, a kaleidoscope is produced which would make a peacock envious. The arm movements of Jalisco Folklorico are particular to this type of costume, which accentuates the movement of the heavy skirt in the near-continuous twirls of its dancers.

The show of the Ballet Folklorico de La Universidad de Guadalajara begins with a prehispanic interpretation of a fire dance and moves through the dances of the different regions, separated by musical interludes of canto typico, while costumes are changed and the stage is reset.

Though the program occupies a full two hours, with a short interlude, you don’t notice the passage of time, as one dance leads into the next.

The level of excellence shown by the secondary dancers in the performance we saw was impressive; some of the dancers in the suplemento troupe are as young as 16. The obvious joy in performing they exhibited was contagious, and their dexterity, near acrobatic. Though they had to remember the sequences of nearly two dozen dances, they rarely fell out of step, and not far from grace when they did.

For those of you who wish to take in the wonderful Sunday show at the Teatro Degollado but would rather leave the driving to someone else, Charter Club Tours offers a weekly Folklorico Tour. Viva Mexico! 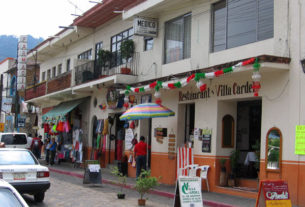 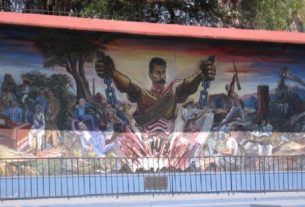 Murder in Mexico: an English family during the Revolution