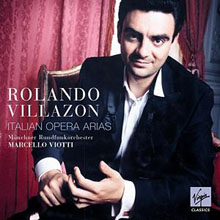 I don’t know anything about opera, and accidentally once proved it to my date at a screening of Franco Zeffirelli’s film of La Traviata. Halfway through the movie, I whispered, “What a rip off. All they did was copy the plot of Garbo’s movie, Camille.” How did I know that the Verdi opera, based on Dumas’ 1848 novel, was written long before Garbo was even born? Like Lincoln said, “It is better to keep one’s mouth shut and be thought a fool than to open it and resolve all doubt.” At least my date was enough of a gentleman not to laugh aloud; he merely snickered behind his hand. When, on Christmas Eve, I was trapped into seeing a new film of another opera, La Bohéme, I determined to keep my big trap shut — except for you, of course. I just have to tell you about it.

Emilio Rolando Villazón Mauleón is the world’s next great tenor, at least equal to Placido Domingo, but easier on the eyes and with far more dramatic gifts. You don’t have to know anything about opera to appreciate Villazón’s voice. When you hear him sing, your jaw drops, your eyes glaze over, and the hairs on your arm stand to attention. My goose bumps had goose bumps of their own. This, I thought, is a voice for the ages. I felt like Al Capone must have felt the first time he heard the voice of Enrico Caruso.

Villazón was born in 1972 in the Mexico City suburb of Fuentes de Satellite. At the age of 11, Villazón entered the Mexican Academy of Performing Arts (where he later met his future wife, Lucia), studying acting, music, modern dance and ballet. That would account for the graceful perfection of his later onstage movements. He is to opera as Fred Astaire was to dancing.

His father used to bring home records from his job at Columbia/Sony, including Placido Domingo’s “Perhaps Love.” Villazón loved Domingo’s voice and bought every record of his that he could, except opera. Back then, he didn’t even like opera. In fact, he had decided to study for the priesthood. Luckily for us, fiancée Lucia sent him on an intense soul-searching mission, which ended with Villazón’s painful decision to not become a priest.

When he was 18, Villazón sang in a school play, with baritone Arturo Nieto in the audience. Nieto went backstage and invited Villazón to take instruction from him to develop his really big voice. When Villazón arrived at Nieto’s studio and saw a photograph on the wall of Nieto with Villazón’s idol, Placido Domingo, he was so impressed that he decided to take up Nieto on his offer.

Two years later, after singing before an audience of 1,500, Villazón met with his mentor, a Catholic priest, who assured him that his destiny was opera, and persuaded him to try out for the conservatory at once.

Villazón auditioned next day, singing an aria from La Bohéme, and using a pillow as his character’s lover, Mimi. In order to finance his studies, Villazón taught history part-time, and nearly became a full- time teacher. But Lucia, now a psychologist, threatened to not marry him if he refused to pursue his dream. Smartly, he listened to his Lucia and continued his studies, now under Enrique Jaso.

In Villazón’s case, it seems destiny was spelled L-U-C-I-A. He started performing in small parts, easily winning two national opera competitions in Mexico. Within only a few years, Villazón has graced the most famous opera stages on earth, performing the lead male roles in the greatest operas ever written.

The New York City Opera magazine, Music & Vision, wrote that he sings with such seeming ease that it is almost scary There are no mistakes, anywhere, no stifled tones, no sloppy phrasing. This is a great tenor voice, a truly exceptional voice… It is a voice of rare beauty, with a tender romantic touch, but capable of displaying fiery youth.

After voice problems in April 2007 forced cancellation of performances at Carnegie Hall and the Metropolitan Opera, today, Villazón’s voice is back, as superb as ever. He has just released his 2010 schedule, which includes performances in Mexico next June.

Though Villazón did not become a priest, God has gifted him with something else: the voice of an angel.

If ever I have another date to see a new version of La Traviata, this time starring Rolando Villazón, I won’t even think about Garbo. I’ll be too busy in the faraway place to which his soaring, celestial voice has transported his adoring audience.