Mexicans love wearing masks. My favorite is a statue of a dog wearing a human mask created about 300 A.D, and found near Colima. Masks are part of the Christmas pastorelas, depicting the devil, the hermit and Sin, dressed in red satin. Masks are an integral part of many ritual dances (the Spanish word is danza for ceremonial dances.)

The Dance of the Old Men is performed on many festive occasions to commemorate Huitzilopochtli, the god of fire and battle . In Jalisco and Michoacán the dancers wear wooden masks with ruddy cheeks; they dance slowly around a fire, then faster and faster to fan the flames. One can imagine that this represents the vigor of youth dying out into old age. Ihuatzio and Pátzcuaro on the shores of the Lake of the same name often feature this dance, as well as on the Island of Janitzio. When I see them I imagine the Tarascans dancing to honor the hummingbird god, 400 years before the Conquest.

As the Indians were being converted to Christianity, their dramas, dances and music were encouraged as a way of dramatizing the lessons.The indigenous people graciously accepted the new god into their pantheon of many gods, each with a different aspect. This mutual absorption of both the conquerers’ and conquereds’ gods had historical roots as, when one federation of tribes conquered others; they absorbed the gods of the vanquished, tolerating and taking over, as the Aztecs took over Toltec gods.

The dance of the jaguar includes marvelous masks that I saw in the museum housed in the ex-Convento de San Francisco in Zacatecas. I visited on three occaisions and enjoyed the hidden gardens and the 17th and 18th century construction. It is altogether the most beautiful museum I have seen in any country. It houses a collection of over 5,000 masks from all cultures in Mexico, including the fierce jaguar masks.The jaguar dance is widely celebrated in Mexico and Mesoamerica. This god was originally revered by the Toltec civilization and was adopted and modified in the Tarascan center of Tzintzuntzan in what is now Michoacan. Still, today, recreations of these masks are for sale in Uruapan and other Michoacán pueblos.

In the north of the Republic, the Mayo perform the deer dance in an arbor, as do their near neighbors ,the Yaqui, whose masks are tied to the top of the head, not obscuring the face. The masks have shaggy eyebrows and beards. I conjecture that this alludes to the Spaniards as well as the prey.

Versions of the deer dance are performed frequently all over Mexico. In Nayarit and Jalisco the Huicholes perform this dance, as the deer is one of their principal gods. One sees him immortalized in lovely beaded masks, though these are not used for the danza.

Masks depicting the Three Kings are a post-Conquest innovation; one sees them during the celebration on January 7, for Three Kings day. Masks lacquered black represent Los Negritos used to commemorate the battle of the Moors and the Christians in the state of Guerreo in August. Iguala is the pueblo to visit for the most enthusiastic danza de los Moros.

Religous dances may be Chistian and not historic as is the dance of the Santiagos in the Sierra de Puebla where St. James carries and wears a bearded mask as he fights against the heathen. In Sierra de Puebla animal masks representing the ancient gods are used: bulls, cats and a strange feline beast. On the Day of the Dead skeleton masks on painted cloth are employed in these rituals whose roots are pre-Hispanic.

In the state of Oaxaca, home to scores of different tribes, each speaking its own dialect, little boys wear suits and masks of tigers in the dance of the tigers, while men try to rope them. Vist the villages of San Marcos and the District of Villa Alta to see this dance.

Masked clowns are a common feature of ritual dances; they are usually men dressed as women sometimes masked, and they jeer and taunt the crowd before and during the dance. In Jocotepec, Jalisco these clowns appear as part of the dances performed in January for the Fiesta of El Senor del Monte and dancers from all over the state don their fringed costumes and clacking soles to their shoes and stamp out the rhythms passed on from father to son for many centuries.

Wood, coconut shells, paper mache, animal hides, fabric, leather and copoer are materials used to make masks, the latter material used in Santa Clara del Cobre, a village close to Patzcuaro. Copper weapons gave the Tarascans a fighting edge against the Aztecs and they were never conquered by their mighty neighbors. The mask I see sometimes on the faces of those who serve in luxury hotels and restaurants is often the mask of la Malinche, an expression which says, “I may serve you and smile, but behind the smile is strong dislike of you; your manners, your clothes, even your smell. . . 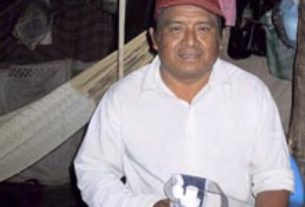 How much electricity am I using?

Sweet And Sour Times On The Border