What on earth is one to make of this big sprawling exuberant novel? There were times when I enjoyed it and other times when I wondered if I would even finish it. For my taste, it’s just a bit too sprawling and exuberant.

It’s as if Sandra Cisneros just had too much to say and was afraid she wouldn’t be able to squeeze it all in. The story mostly concerns three generations of a Mexican family, some of whom live in Mexico, others in the U.S. The action starts with three family groups making an annual pilgrimage from their homes in Chicago to visit other family members – like Awful Grandmother and Little Grandfather – in Mexico City. As they drive in three carloads down Route 66 one of the daughters, Lala, tells us about them – or at least some of them.

And that’s just one carload. You almost have to take notes in the early going to keep all the characters straight in your mind.

Cisneros just has so much to say that she even has footnotes at the end some of the 87 chapters so she can squeeze in some more information that may or may not be pertinent to the narrative. Thus, in one footnote, we read about President Woodrow Wilson in 1914 ordering the U. S. marines to invade the port city of Tampico. In another we read a short dissertation on Mexican telenovelas.

At the end of the complete narrative there’s even a chronology of key events in Mexican history from 1519 to 2002.

One feature of the storytelling that I imagine would be quite controversial is the excessive use of Spanish text throughout, literally on every page. So you have hundreds of sentences like the following: “This escuincla looks like I have to help her put on her calzones.” Or: “Señor Vidaurri has a big burnt face like the sun in the Loteria cards. La cobija de los pobres, el sol.” Or: ” Vieja metiche, I hear myself muttering…” This aspect of the book is greatly overdone.

My biggest problem with Caramelo is that it really isn’t a novel. It’s more like a huge collection of sketches and strings of narrative loosely woven together, swinging back and forth among three generations and three families. There’s no centre that I could perceive and, consequently, little sense of direction. There’s no plot or quest or communal striving. It’s like a huge mural painted on a wall showing hundreds of different scenes but somehow lacking the underlying order that brings everything together – other than most of them belong to the same family. There isn’t even a single character who dominates the proceedings and with whom you can identify. Rather, we have all of these chapters swinging back and forth between different family members and different generations, with not all of them taking place in the same timeframe.

There’s an attempt to provide an overall pattern with frequent mention of the rebozo, the traditional Mexican shawl. The Awful Grandmother has a prized caramelo rebozo and, like the rebozo, “the universe is a cloth, and all humanity interwoven. Pull one string and the whole thing comes undone.” This seems to serve as a symbol that helps hold the narrative together, but not very securely in my opinion.

I should say, in fairness to Ms. Cisneros, that when I looked up some reviews of Caramelo in places like Amazon.com and Barnes and Noble.com I found no end of glowing reports. The lady has a lot of fans out there. I have never read her other novel, The House on Mango Street, which many, many people admire. I must take a look at that one sometime. But the glowing reviews of Caramelo are quite abundant.

On the other hand, I’m not alone in my negative views.

In doing my research I found an interesting article on Sandra Cisneros in Book (Sept/Oct 2002). I’ll quote a small part of it.

“Caramelo took Cisneros a long time – nine years – to write. She says she originally just wanted to explain the life of her father. But to do that, she had to explain her ‘Awful Grandmother’, her father’s mother, a bossy, melodramatic woman. But to do that, she first had to tell the story of her ‘Little Grandfather’. Each step took her story back in time and upped the tale’s complexity until, at one point in Caramelo, the Awful Grandmother breaks in as a quarrelsome narrator, comically objecting to the way her life is being told.”

So there’s a bit of an inkling of how the complexity came about.

“Writing,” says Cisnero, “was like backtracking through ancestors and the ‘healthy lies’ of family legend, linking herself to this long thread of people. History is all plot; it’s deadly dull without the life of human detail and human connections. And where history didn’t provide the connections….well, after all she is a novelist. She made them up.”

In my humble O: You’ll have to make up your own mind on this one. 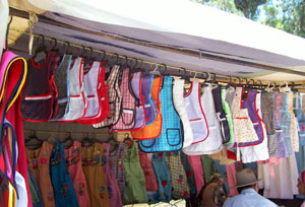