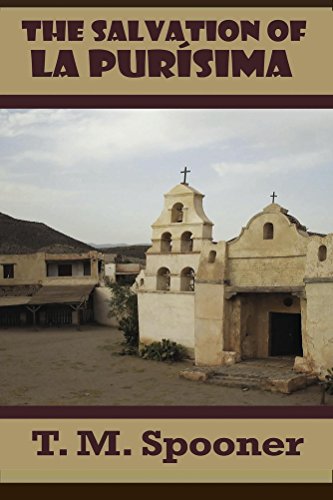 The two cultures – Mexican and U.S. – come together in a thoughtful way in this interesting novel, which is set in both countries.

The story concerns a group of Mexican illegal immigrants who travel north in May each year to work in the cherry orchards in northern Michigan. They are from the village of La Purísima in Michoacán. It’s a community inhabited solely by elderly people and women and children during the picking season when all the men head north on what has become their annual rite of passage. It’s perhaps more than that. As one character comments: “The crossing is a mark of manhood.”

The gringo element in the story is represented by Paul Westin, an anthropology student at the University of Chicago working on his doctoral dissertation, which just happens to be a study of the cherry pickers in Michigan. Paul also teaches a third year cultural anthropology course. He has made many trips to Michigan and knows the Mexicans well, especially Germán Medina, from La Purísima. Paul and Germán have, in fact, become good friends. One of the factors that makes this an absorbing “read” is that Paul’s interest in the Mexicans goes beyond merely completing his dissertation but is a reflection of his genuine interest in the Mexican culture.

Here’s how he describes his studies with the Mexicans: “I sat in the orchard with a group of Mexican migrant workers. I simply listened and chronicled. A documenter’s journal rested on my lap, capturing empirical relevance in hastily scribbled notes. An equally intentioned cassette recorder spooled beside me. But as I rested in that careless circle of men, nearly one of them, yet something different, I felt lured by their lives.”

On their way across the Rio Grande the Mexicans, who are, of course, illegal immigrants, suffered a tragic loss. While crossing the flooded river at the border, one of them, Benito, drowned when a flooded river bank collapsed. He was one of a group of four led by Germán Medina. Martín, the brother of Benito, couldn’t be persuaded to follow the others after his brother’s death in the river. Benito’s body was never found. It’s a tragedy that weighs heavily on Germán’s mind although there was nothing else he could do but continue on his route northward. Martín disappears from the story at this point but returns later in a key role.

Paul has a fiancée, Jennifer, in Chicago. She works in an ad agency and obviously has a successful career ahead of her. However, they make a strange pair – they are quite unalike in so many ways. Jennifer, for instance, doesn’t give a damn about Paul’s anthropology studies and can’t understand why he enjoys “traipsing off to some Godless place to study strange cultures.” In turn, he doesn’t care for her co-workers. Even he wonders at times how come they are engaged to be married.

On one of Paul’s visits to Michigan, Germán receives word that his wife, Hortensia, has been attacked and raped back in La Purísima. Germán decides to return there immediately. He asks Paul to go with him. Paul’s teacher is Professor Lassene, an expert on human cultures and a great influence and source of wisdom during Paul’s university years. The professor frequently urges Paul to enhance his study of the Mexicans by spending time in their home country. “You must gain the trust of the people and in a sense become one of them,” is the professor’s advice. This seems like Paul’s opportunity to take heed and he agrees to accompany German to La Purísima.

I don’t think I’m giving away any surprises when I reveal that the number one suspect as the attacker of Hortensia is Martín, seeking vengeance for the death of his brother months earlier at the river crossing. When Germán returns to La Purísima, for instance, he finds that Martín has been accusing him of deserting Benito and leaving him to drown in the flooded river. Many of the villagers believe him and, as a result, Germán is ostracized by many of them for his presumed cowardice and indifference. The situation has created a fractured situation in the village.

Germán can think only of getting his revenge and he immediately takes off into the local mountains where Martín is suspected of hiding. Paul, meanwhile, stays in La Purísima, where he takes the opportunity to continue his cultural studies. He befriends the local priest, Father Gabriel, and also meets an attractive local señorita, Lilia. There are some interesting exchanges and encounters when Paul and Father Gabriel try to repair and restore the fractured community.

Perhaps the biggest achievement of the story is that Todd Spooner has created a group of real characters that you quickly learn to like and care about. Consequently, there’s a more human face put on the current phenomenon of “illegal immigration”. These people are not simply numbers and statistics but, rather, living, breathing human beings.

Also, Paul in his days in La Purísima learns more profoundly why Professor Lassene was so insistent on his coming to Mexico, “to see and experience first hand, to inhale life and embrace it.”

I think it’s safe to say that the interest that Paul Westin exhibits in the Mexican culture he encounters is shared by the author. Todd Spooner has traveled extensively in Mexico in recent years. This is his first novel. Other novels, also set in Mexico, have followed.

In my humble O: Good one! A really enjoyable read. I look forward to seeing more from Spooner.