Travelers who are interested in the history of this region of Michoacán will be well rewarded by a tour of the numerous picturesque villages bordering Lake Pátzcuaro. In addition to their authentic indigenous ambience and specialized crafts, many of these communities boast old colonial churches and missions, some dating back over 400 years. Here are some of the most interesting, starting on the eastern shore of the lake:

Among the best known of the lakeside towns after Pátzcuaro itself is the ancient Tarascan capital of Tzintzuntzan. Tzintzuntzan is famous for its unusual, key-shaped, Tarascan pyramids, known as yacatas, at least one of which was sacred to the pre-hispanic hummingbird deity whose rhythmic wingbeats gave the town its sonorous name.

The capital of colonial Michoacán, Tzintzuntzan was also briefly the site of the first Franciscan mission to be founded in the region. Fronted by a park-like atrium of venerable olive trees, reputedly planted in the 1530s by the legendary Vasco de Quiroga, the main monastery still stands.

The monastery is built of red and black volcanic blocks, and is distinguished by its carved, 16th century doorways and windows. The Plateresque church front is designed in a bold style, derived from Spanish antecedents but imbued with a powerful local flavor. Shells, rosettes and “candelabra” columns frame the openings, which are dramatically crowned by a broad scalloped canopy spanning the choir window. More shell reliefs and winged angel’s heads fill the great coffered archway of the adjacent open chapel, from which the friars preached to the Indians during the years of “spiritual conquest”.

The simple cloister beside the church also transports the visitor back in time. Numerous centuries-old artifacts can be found along its arcades, including intricate Moorish ceilings, large colonial canvases, fragmentary frescoes, and the renowned relief of the Entombment of Christ in one corner. Across the atrium from the monastery stands the grand baroque church of the Virgin of Solitude, and beside it, the old hospital chapel, dated 1619. Originally founded by Bishop Quiroga, the open arcaded front is also encrusted with shell reliefs and bears traces of old frescoes.

Each February, Our Lord of Redemption, a lifesize early colonial santo molded from lightweight cornpaste, is carried from his chapel inside the main church to preside over the colorful celebrations of his feast day, which culminate in the traditional Tarascan “Dance of the Old Men”.

Rustic villages crowd the western side of Lake Pátzcuaro, each with its own Spanish colonial monument to attract the traveler.

A fine, carved, stone cross faces the colonial church of San Pedro Pareo, whose venerable front is studded with a variety of early stone carvings, including the sun, the moon and a variety of animals.

In ancient times, the windswept summit of the former island of Jarácuaro was a shrine to the Tarascan moon goddess Xaratanga. Today, the old mission of San Pedro stands on its site. As at Pareo, the church facade is encrusted with ancient stone reliefs and statues. Iconic figures of Peter and Paul flank the doorway, while inside, beneath the old, wood-beamed ceiling rests the stunning Black Christ of Jarácuaro-an ultra-realistic, wooden crucifix with corrugated ribs, bulging veins and a scarred head bearing an agonized expression.

A little way along, in the little roadside village of Uricho, another folk Plateresque facade graces the church. The colonial interior features a star-spangled, Moorish ceiling with an elegant gilded altarpiece gracing the east end.

The star attraction of the western shore is the well known market town of Erongaricuaro, noted for its picturesque arcaded plaza and craft shops. It is also home to a wonderful old Franciscan monastery. The church lies a few steps from the plaza, down a cedar-lined avenue. A broad stone porch, again profusely studded with large shell reliefs and featuring the double choir window typical of the region, frames the doorway. Similiar in style to Tzintzuntzan across the lake, it is believed to have been sculpted by the same stonecarvers. Inside the church, another decorative, wooden ceiling draws the eye towards the altar, above which hangs another naturalistic crucifix, known locally as ‘El Señor de la Misericordia’.

A triple arcade fronts the monastery entrance beside the church, where intricately carved “rams-head” capitals crown the fluted columns. Recessed behind the center arch is the broad paneled archway of the old open chapel. Along its frieze, medallions of the Sacred Heart alternate with the crossed keys of St. Peter. Blocks of dark, reddish basalt, similiar to those of the porch and sanctuary arch of the church, outline the stocky arcades along the cloister, and archaic doorways with pointed Gothic arches open into the surrounding conventual rooms. At the rear, an arcaded mirador commands a panoramic view across the monastery gardens to the misty islands and shimmering waters of Lake Pátzcuaro beyond.

Visitors who continue along the western shore en route to the busy crafts village of Quiroga on the north side of the lake, will pass several other Tarascan villages. Perhaps the most interesting of these is Puácaro, whose narrow streets also lead to an early Michoacán mission. Its scalloped, Moorish doorway, freestanding tower and colonnaded priest’s quarters with rustic, overhanging eaves face a lakeside plaza that offers yet another a breathtaking vista across the lake.

North of the Lake

In ancient times Zacapú was the shrine of Curicaueri, the greatest of the Tarascan deities. The Franciscan monastery, founded here in 1540, still stands. Its bold, classical facade–reportedly designed by the architect of Tzintzuntzan–is studded with numerous shell reliefs, and the churchyard is filled with stone carvings ancient and modern, including a statue of the founder, Fray Jácobo Daciano, wearing his broad-brimmed pilgrim’s hat.

Vestiges of 16th century religious murals appear on the walls of the old arcaded cloister beside the church, while the former hospital chapel across the road, now a retreat of Franciscan nuns, retains its gilded colonial altarpiece.

Naranja de Tapia, just down the road, is a smaller village, whose spacious, gabled church contains one of the finest painted ceilings in Mexico. Dated 1733, the ceiling is crowded with religious figures from the history of Christianity–saints, martyrs and prophets–sketched in reds and blues still vivid after 250 years. 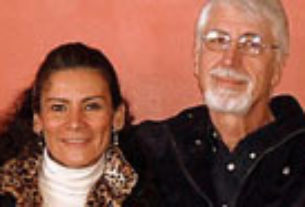 Cooking with tequila: Mexico’s national drink moves into the kitchen – Part One