Luz and her family live and work in what amounts to her bedroom. There are basically two rooms in her house, her bedroom/pottery studio/living room and the kitchen. A hallway with a wide spot that doubles as a sleeping area for one of her boys connects them. Two other boys sleep in the kitchen on a cot piled high with discarded coats and clothes, which are used as blankets. Luz is an intelligent woman and a fine potter. She loves her children dearly but she is a poor housekeeper. Her home is one of the few unkempt places in Mata Ortíz.

I was sitting and chatting with her one day in the cramped main room. She was at her usual post, a small table by the window, applying a graphite and oil solution to an unfired ceramic and polishing it furiously with a small black stone. It was dirty work. On the double bed, which absorbs about two thirds of the room, her one daughter, three years old, played with a balloon. (She sleeps in a small crib tucked in a corner). An old fashioned wooden dresser loomed beside the bed, jammed with clothes also served as storage for finished and nearly finished pottery. From the hallway bed musica ranchera played – softly, for once – from an ancient radio.

Two American tourists arrived, timidly knocking on the door. Alberto, then about ten, leapt up from his radio and flipped a bent nail to unlock the primitive door. He ushered the couple into the studio as his mother stood, wiping her hands on an already dirty rag. Luz’ tired face lifted and blossomed into a genuine smile as she greeted the potential buyers. Beto was already at work, pulling black pots from the dresser and placing them on the bed – taking care that they were positioned safely out of harm’s way from his half-sister.

The highly polished pieces were small, maybe four inches high and shone in the light of the one hanging bulb over their heads. They lay a-kilter, because the elegant bases were no wider than a penny. The sides sloped steeply upwards and flared outwards before curving back inwards to thin necks and gentle mouths. Each was intricately rendered with matte-black designs, taken from the Casas Grandes tradition.

Luz placed a couple of the jars on her table to demonstrate how well they balanced on the narrow bases. The couple gasped in astonishment. “How much?” the woman asked.

“Seven dollars each,” the potter said. Her eyes flickered to mine and her brows furrowed slightly as she read my face. The Americans – from California, they said – purchased two pots and Beto quickly and efficiently wrapped them in newspaper and placed them in plastic bags. While Luz pocketed the $14, I explained to the proud new owners that the best way to preserve the luster was to never touch the blackware with their fingers. Instead, use a towel to hold each piece when dusting. Don’t let perspiration mar the shine. (I can’t help it. Mata Ortíz pottery is so exquisite, virgins to the craft can’t help picking up the art and caressing it with their hands, as one would a lover. There is an innate sensuality to the ceramics that cries out, “Fondle me!” This is no problem with the polychrome, but very damaging to the blackware).

The guests gone, Beto returned to his music, Leticia could play safely once again on the bed. Luz and I sat down and she said to me: “Mike, you didn’t like my price, did you?”

Later in the day, the same sized pieces were selling for $12 and soon after for $20 – and there were plenty of eager buyers.

Like for so many people worldwide, life has been a struggle for Luz, but she endures with dignity. Born in Mata, she married a man from Mexico City and had four boys with him. For a while they lived in Distrito Federal and survived the disastrous 1985 earthquake unscathed before returning to Mata Ortíz. The husband abused her badly and the two oldest boys, my godsons (and now also potters) also have scars from his abuse. Eventually, he stole all the money out of the till of Luz’ small store, took the kids’ birth certificates and crossed the Río Grande illegally. Young Beto still is affected by the abandonment of his father.

Luz soon began living with a male potter. It wasn’t long before she began helping him with his blackware. She hadn’t worked with the clay before and started with the sanding and polishing. Then, she began experimenting, making her own small pots. One day, her new husband told her, “Luz, you must stop helping me and concentrate on your own work. You have learned the craft much more quickly than I have.”

She took his advice and, with experience, she has become a wonderful craftsperson. Traders and tourists flock to buy her still relatively inexpensive black ollas. Few improvements have been made to the home, even though there are now two adult potters in the family. I don’t know for a fact, but I fear a lot of the money goes to her second husband’s house he has built in the nearby city of Nuevo Casas Grandes.

So, Luz continues to endure, making pottery and supporting her children. And she does so with dignity.

An American Chef In Mexico 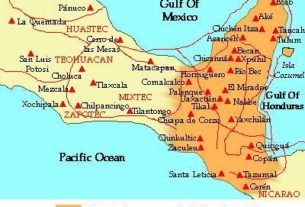