Did you know that among the many things Mexico has given to the world, chewing gum is one of them?

El Tzictlil, a Nahuatl word for resin from the Zapote Blanco tree, caught the attention of three American travellers, Thomas Adams, John Colgan and William Wrigley who noticed that the resin hardened when exposed to air.

They began to export the resin in blocks and in 1869 the three men found a way to vulcanize it into a kind of parrifin. They shaped the substance into balls, calling it ” Adam’s Chewing Gum from New York” and sold it for a penny a piece.

Soon they developed a machine to cut the blocks of gum into strips and added sweetener and flavor.

Wrigley’s son began selling it on a large scale in 1882 through travelling salesmen who extolled its virtues to anyone who would listen: “Chew gum for health – it encourages intense salivation to help clean your teeth, it will strengthen your jaws and promote good digestion.”

By 1907 Wrigley took a leap of faith and committed $1 million of advertising to promote the gum which now bore his name. In three years, sales were at $4 million dollars. Today the USA consumes seven times more chewing gum than the rest of the world.

So, one of the symbols of Yankee civilization, Wrigley’s Chewing Gum, came to the USA from Mexico. 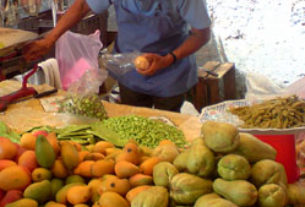 Chayote: Squash dresses up for the holidays