Photo Gallery: My Life As An Escaramuza Mom 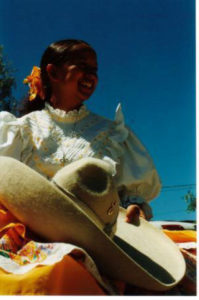 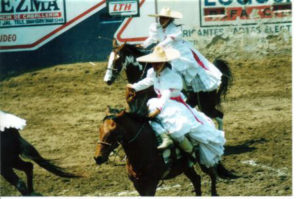 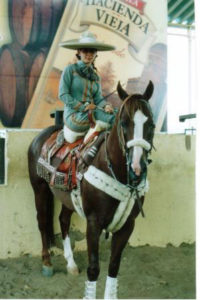 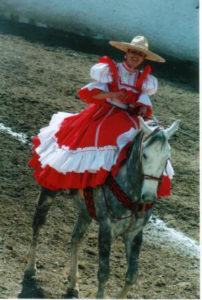 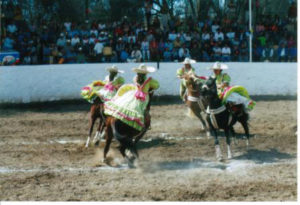 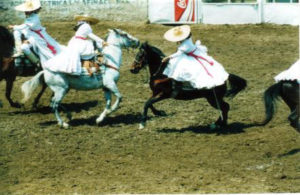 In this day and age, dedicated parents willingly support any type of sporting activity that draws the interest of our off-spring. The average mother of today assumes a host of collateral tasks that go with the territory–handling transportation logistics, cheering from the stands, cajoling during training slumps, rejoicing in victories, consoling in moments of defeat. The pattern is pretty much the same, whether the sport in question is soccer, softball, basketball, gymnastics, ice skating, tennis, martial arts, or…you name it.

Since the start of 2004 I’ve had the exhilarating and sometimes exhausting privilege of acquiring an insider’s view of Mexico’s horse circuit as companion, chauffeur, and booster for my 16 year old daughter Andrea. At the urging of MexConnect’s webmaster, I’ve agreed to share the experience. Since I’ve never been one to remain static long enough to keep a diary, the original concept of a journal format has been discarded from the get-go. Here, instead, begins a digest of memories and reflections from my amazing adventures and off-beat journey as an Escaramuza Mom.

But, wait, you say? What the heck is Escaramuza?

In basic terms, it’s a team sport for women and a peculiar hybrid of Mexican and North American equestrian arts. Spectators have described it as something akin to a ballet on horseback. For me it is among the most dazzling and thrilling of horsemanship displays, almost on a par with Vienna’s fabulous Lipizanners and the Spanish bull-fighting art known as Rejoneo.

Escaramuza is a relatively new form of competition that is woven into La Charrería, Mexico’s national sport. La Charreada is a south-of-the-border style rodeo that involves not only cowpoking skills, but also culture, folklore, traditional handicrafts and family values derived from the ranching lifestyle of yesteryear. For an introductory outline of the sport see “A Companion Guide to Charreadas” posted at https://www.mexconnect.com/mex_/travel/dpalfrey/dpcharreada.html.

The charreada is decidedly a “macho” thing. It centers on riding and roping techniques and a lot of rough and tumble business with bulls and broncs–not exactly lady-like activities. Nonetheless, Mexican horsemen–called charros–engender daughters as well as sons, born with even odds for inheriting a love of horses. Yet until just a few decades ago, the woman’s role in Charrería was limited essentially to that of playing the demure and attentive hostess.

Then back in the 1950’s one of Mexico’s most distinguished charros caught a mounted drill team act during a visit to the USA. He introduced the concept as a horseback riding activity for the young children of charro families under the label “carousel.” It caught on big with girls, who wasted no time in taking over the form while their brothers were focused on mastering the usual charreada skills. As early enthusiasts became more proficient at riding, they began beefing up the speed and intricacy of their drill routines, giving rise to a new and more descriptive label for the art– escaramuza–the Spanish word for skirmish. The sport was soon formalized and has since gained increasing popularity among amazonas (female riders) all over Mexico and even in Latino communities beyond its borders.

While escaramuza performances may tagged on as an added attraction to any charreada or scheduled in ferias amistosas (friendly fairs), formal competitions on the state, regional and national level are programmed and sanctioned by the Mexican Charro Federation. Official contests require strict adherence to complex rules and regulations that govern every aspect of the event, from a code for acceptable dress and tack to exact judging and scoring procedures.

Each escaramuza team is composed of eight riders who wear matching outfits, with the option of donning either the traditional full-skirted Adelita style dresses or fitted skirt and jacket ensembles similar to standard charro attire. Likewise, their wide-brimmed sombreros, the customary charro head gear, must be identical in color, style and decorative detail.

The escaramuza routine is made up of a dozen individual exercises presented in uninterrupted succession. The presentation runs an average of 10 minutes and is performed throughout at a full gallop, with all riders mounted on a charro style sidesaddles. A backdrop of lively Mexican music adds to the rhythm and drama of the thrilling string of geometric movements. Heart-stopping crosses and quick turns must be executed with great precision to avoid accidents and minimize point deductions for loss of synchronization and symmetry.

My daughter’s interest in horseback riding came naturally. She’s grown up around the various horses kept at the family homestead since before her birth. As an infant I often packed her into a backpack, mounted up and took her on spins around the neighborhood.

At age seven, already a confident rider, Andrea had the opportunity to join a new escaramuza group being formed locally under the generous sponsorship of a Mexican-Canadian couple. She quickly mastered riding sidesaddle and loved it from the start. Unfortunately, the team broke up after just two and a half years. Eventually she latched into another local group, but soon discovered that most of her companions seemed more interested in dressing up to appear in community fiestas and parades than in dedicating efforts to training and performing.

The panorama changed radically with a phone call last December from Francisco Martínez, head honcho at Rancho Los Olivos and one of Mexico’s most highly regarded escaramuza trainers. He had an enticing invitation for Andrea that has put her straight on the path to the National Championship contest coming up October 15-31 in Aguascalientes. So far it has been an arduous, yet deeply rewarding journey for both mother and daughter.

If you’ve reached this point in my tale, you’re probably curious enough to return to Mexconnect for subsequent chapters and the unfolding of the denouement. In the next installment we’ll start down the rocky road to nacionales, with perspectives on bonding with the team, slogging our way through training sessions, learning how to properly starch a petticoat, hitting the competition trail, and striving to stay centered through triumph and tragedy. Stay tuned.