Some of the longest lasting and most useful lessons in life come at the worst of times and in the most dreadful of ways. It’s because life is so unpredictable, I suppose. We become all the better for it. The anguish suffered from a painful experience must really stimulate those nerve connections in the old noggin, for a learning process does in fact take place. Such was the case for me one particular time while riding the Mexico City Metro, blue line, heading south.

The Metro is a traveler’s gold mine. With nine lines that spider web their way underneath the world’s most densely populated city, it services hundreds of thousands of people per day. At any metro station people scurry through the corridors to catch the next train. Some stations are so busy that this rush takes on the appearance of a human herd.

Everyone has some place to go. Passengers hurry along the corridors to get the best spot – women with babies, college students, get-ahead businessmen – and crowd into the loading area, packed together like sardines. The horn of the coming car sounds in warning and the florescent lights of the inner hall flicker as metal wheels screech to a halt against the iron rails. The bright orange train rushes in and comes to a quick stop. The pushing and shoving starts even before the doors slide open, as those waiting to get in can’t wait for those getting out. And when the last of the riders disembarks, the waiting passengers pour into the car and fill it up. I’ve seen the cars so packed that the doors sliding closed slice through the people like cardboard through a bowl full of marbles, separating the two sides with one, thin line.

Many a time the less-fortunate stream through, selling calendars, candy and the like, or musicians share their souls for a coin or two. On one occasion I was riding at the end of a car when a blind man stumbled down the isle, feeling his way with a cane in one hand, jingling a tin cup of coins in the other. Dark sunglasses hid his blind eyes. I felt sorry for him as he reached the end of the train and stood by me waiting to get off at the next stop. What a hard life this man must have. But then, the strangest thing occurred. As he was leaving the train, alms in hand, he looked me up and down.

While in college I rode the metro hundreds of times, all over the city. I learned how to protect myself. I learned some valuable rules that made me metrowise.

First and foremost, don’t make eye contact. This can be very difficult for someone like myself, small town raised, smiling at everyone all the time. But that Mr. Rogers innocence does eventually come to an end. Little or no eye contact is especially important for women, as making it implies availability to men and sparks their hunter instinct. No eye contact can be very challenging at times, as many Mexican men take freely to staring, hard stares that don’t quit. So then it becomes a game; who can stare or not make eye contact the longest. In these situations, I make it a point to win.

Next rule – don’t smile. Smiling makes a person look vulnerable and oafish. Only people from small towns smile. It’s too goofy a thing for a hardened metro rider to consider. Might ruin that tough-guy image.

I also learned not to talk loud. It attracts unwanted attention and invites a large number of otherwise bored riders into the conversation. Since entertaining eavesdroppers isn’t for me, discretion became the name of the game.

One day I found myself heading home after teaching an English class in the city center. I remember the cars being moderately full that day. Sometimes rush hour gets so full that the women are separated from the men and ride in the forward cars. The pushing and shoving lightens up and smiles are shared over babies, but the almost no eye contact continues. Well, this particular day wasn’t that busy, so I got on a car somewhere in the middle of the train. Not able to get a seat, I rode standing, at the end of the car where two seats and a one-person isle are separated from the doors by a railing.

Standing there, averting my eyes, I read the advertisements posted inside the cars that sold a variety of things; English classes, courses in computer programming, purified, bottled water. The noise coming from the tracks as the orange cars picked up speed was intensified only by the horn that blew as the train came into each station, where giant, lit-up posters of the latest movie stars created a welcome diversion for my tired-of-looking-at-nothing eyes.

The monotonous journey continued on: the noise of the speeding train, coming to a station, the electronic bell with the doors sliding open, more people getting on, getting off, the doors closing again, the train taking off. So as not to lose my balance, I hung on to the metal bar, my long skirt swishing over the tops of my boots as the train stopped and started.

My exit was approaching. As the train rocked and sped along, I moved toward the open area in front of the doors, getting ready to exit the car. Still hanging on to the metal bar so as not to fall, I suddenly found myself encircled by men, with my hands occupied. And then it came, swift and fast. An open-handed, complete, and full grab of my vulnerable bottom!

In shock and outrage I swung around to the short, little guy who was standing directly behind me, ” ¡No me toques, cabrón!” I yelled, for the whole car to hear. And before I knew it my hard-soled boot went crashing down on the bridge of his foot! ” ¡Pinche viejo!” I added in fury, as he winced in pain. Then I caught my impulse to give him a hard right in the gut and it turned into a stifled pinch, like something a mother might do to a child. The little man just kept repeating ” ¡No fui yo,Yo no fui!”

My face was violently red, and I realized that everyone was watching. The other men around me stood there either gaping or stone-faced, and I sensed that I had the sympathy of a couple of them. Furious, I looked back at my offender who was almost trembling in fear. And then I saw a tall man from behind silently snicker, the expression in his eyes saying, “gotcha!”

The train’s wheels screeched to a stop and the electronic bell sounded as the doors slid open. I whirled around and left both my offender and my victim behind. But I carried the extremely evil and cruel incident with me, and as I walked away, tears filled my eyes.

Rule number four – don’t stand in the middle of a group of people, especially not a group of men.

I learned two things from this atrocity. From then on I stood with my fanny against the wall, at all cost. Even if it meant aggressively pushing and shoving others out of the way.

I later learned that my violent reaction to the incident went far beyond the limits of social conduct expected of women. If you react violently, I was told, it only provokes them, justifying, in their minds, their behavior all the more. My Mexican women friends instructed me that the most effective reaction in cases like this is to shame them with a how-is-it-possible, or an I-can’t-believe-you-did-this approach. Call upon another, decent man nearby to morally defend you. Ask others, “Did you see what this man did to me?” Forget what psychologists say about communication skills and use any technique possible to embarrass the jerk and make him feel like a guilt-ridden crumb. He will hang his head low like a scolded child, sulking, and droop off at the next stop. And how effective this technique is! Since then, I have seen it happen. 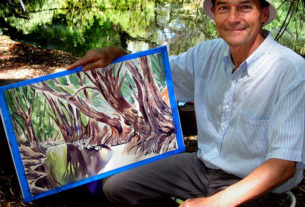