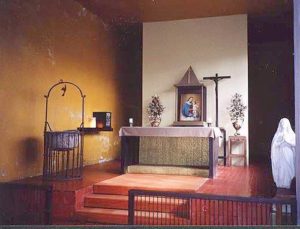 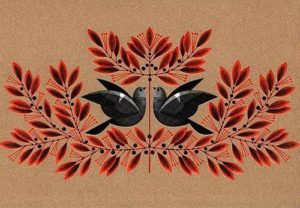 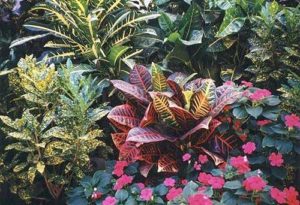 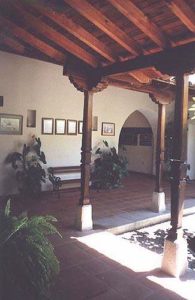 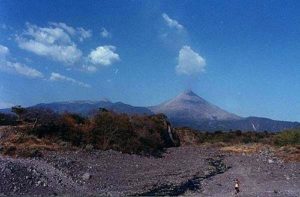 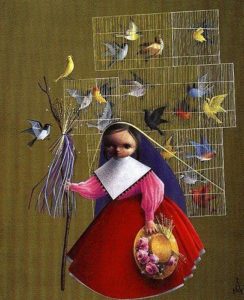 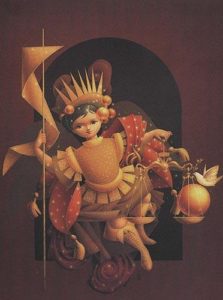 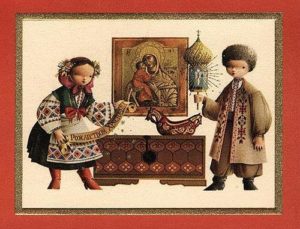 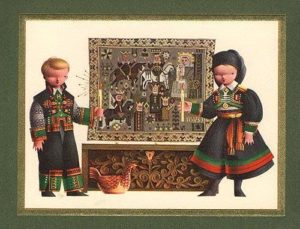 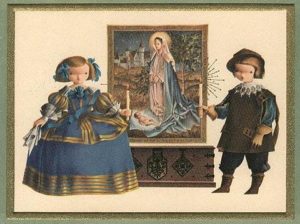 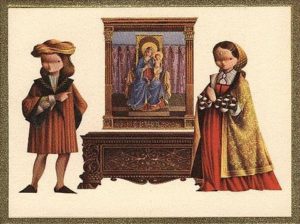 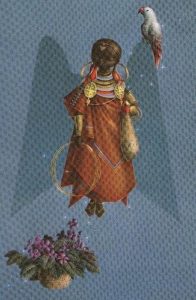 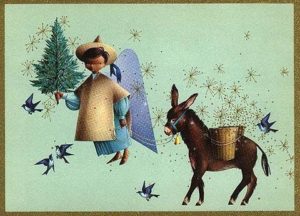 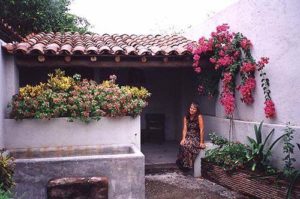 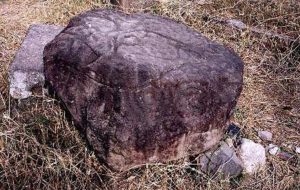 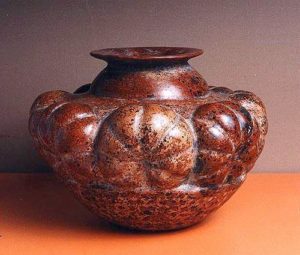 In the half-light I enter the ‘horno’ or oven room. A base of reds frames the pre-Hispanic pieces in the Museum of Alejandro Rangel Hidalgo. It is easy to imagine the fiery origin of the land and the fire that formed the ancient ceramics. Outside, the Volcano of Fire smokes above the countryside.

And so I meet for the first time, the designs of artist Alejandro Rangel Hidalgo.

In the Hacienda de Nogueras, Comala, Mexico, Alejandro’s personal style is everywhere. So compelling are his designs that it seems Alejandro himself might, at the next moment, round the corner. The museum, furniture, archways, rooms, paintings, and even the flowers speak of the man.

Into his seventy-three years, Alejandro Rangel wove three passions together: his work as an artist and graphic designer; his love of nature and his love of pre-Hispanic culture. His work was also filled with old cultural initiatives.

In 1923, Alejandro was born the eldest of three sons on a sugar cane plantation. When Alejandro was young his father took him on long walks in the countryside, where he shared his love for nature with his son. However when the economy of the sugar cane mill collapsed after the Mexican Revolution, Alejandro’s parents faced the challenge of educating their sons. In the benevolent atmosphere of the Hacienda of Nogueras, the couple created a rich learning environment.

At an early age, the boys were taught to read. Unable to attend school, they subscribed to many cultural and mechanical magazines. In addition Alejandro’s mother shared her considerable knowledge of art, history, literature, geography, astronomy and music.

Their father had learned metalwork skills to keep the hacienda running. He taught these skills to his sons. In the family workshop, the boys worked with carpenters, making or repairing furniture for the hacienda. To help the family survive the sugar mill’s collapse, Alejandro’s mother set up a store. There she also sold toys and projects made by her sons. Alejandro liked to paint the creations. At the age of six, he announced he would be a painter.

In 1935 the three boys went to Secondary and Preparatory school in Guadalajara. After graduation, Alejandro spent time in the workshops of famous architects, Ignacio Díaz Morales and Luis Barragán.

In 1947 Alejandro won a prize and scholarship for a book illustration. The book, written by his close friend Juan Rulfo, became a Mexican classic. Rulfo called the imaginary town in his novel, Comala, after Alejandro’s birthplace. The scholarship for the illustration entitled Alejandro to travel for two years around Europe. In the great centers of art and culture, he worked as a scene illustrator in ballets and operas. Upon his return to Mexico he worked as an illustrator of books.

In 1956, Alejandro designed several posters for the First Grand Fair of Jalisco. Streamlining the towers of a cathedral, he created two graceful triangles tied to the base of a semi-circle. This visual depiction continues to symbolize Guadalajara today. Alejandro’s influence in graphic design began.

Alejandro designed colors and interiors for the remodeling of the historic centers of Colima, Comala, Villa de Alvarez and Nogueras. He also designed restaurant interiors like ‘Los Naranjos’ in Colima, ‘Los Chiles’ and ‘ La Fuente’ for the Embarcadero Center in San Francisco, California.

In 1963, to help the children of the world, Alejandro created an edition of Christmas cards for the United Nations UNICEF. During the year, the edition achieved record sales. The edition ‘Christmas through the Ages’ depicts historical scenes from the fifth to the nineteenth centuries, showing images of Spain under Philip II, the Renaissance, French Gothic, Mexican Colonial, Victorian England, Pilgrims in America, Germany, Norway and Russia. Another edition of cards entitled ‘Angels of this World’ features angels in ethnic dress. An additional edition presents a host of traditional Mexican costumes and motifs.

Alejandro’s paintings combine finesse and delicacy in an intimate and romantic style. The artist took inspiration from the natural beauty of Nogueras. His style is a synthesis of leaves, flowers, fruit, insects, and birds, their backgrounds and light. The paintings play with color and form, nature and abstraction, dream and reality.

During his involvement with the University Institute of Fine Arts, Alejandro created his “ Coro de Niños Cantores” (Choir of Children Singers). While working with director Rafael Zamarripa, he created an international image for the Folkloric Ballet of the University of Colima.

In his workshop at Nogueras Alejandro continued to design and make furniture. Collectors of fine furniture sought out the pieces. Embassies and presidential suites also desired the furniture’s solid appearance and clean lines, along with its contrasting finishings and attention to detail. They valued the diverse textures applied on tropical woods like mahogany and the local wood ‘ parota’.

Alejandro felt a deep sense of responsibility for the social and welfare needs of the people at Nogueras. When the sugarcane economy collapsed the workers lost their primary source of livelihood. Alejandro helped families start up new businesses like small stores and restaurants. He designed and built model homes for the workers to create a picturesque village surrounding the hacienda.

With money from his paintings, he built a school for the children of Nogueras. He made certain that everyone received hygiene instruction, medicine and hospital care. With doctor visits infrequent to the hacienda, Alejandro used his knowledge of human nature to doctor both the body and the soul. He was able to correctly diagnose and treat many illnesses.

A devoted Catholic all his life, Alejandro catered to the villagers’ spiritual needs by celebrating fiestas and upholding local traditions. He invited priests from the city to vacation and rest at Nogueras. The priests would give services in the ancient capilla or chapel built by the Franciscans in the 1500’s. The capilla, remodeled by Alejandro, serves the community to this day.

In 1975, with federal funding and help from his brother, Alejandro founded a School of Artesans in Comala. In this small town next to Nogueras, he shared his knowledge of design, painting and furniture making. For six years, he instructed three hundred local artisans, working in wood, iron, leather, gold leaf, paper (flowers) paint and furniture finishes. He also designed blown glass for craftsmen in Tonala and Tlaquepaque, Jalisco.

During this same period Alejandro helped his wife, Margarita Septién Rul, found Colima’s first school for social workers. He supported the Institute of Vasco de Quiroga in part from the sale of his paintings. In their commitment to social change, the couple believed in the principle of supporting people to help themselves. Forty years later, the Institute still operates daily. Two hundred and fifty students are enrolled.

In 1985, Alejandro helped found the University of Colima’s School of Architecture under the direction of Arg. Gonzalo Villa.

In 1993 he won the First prize for the Estatal de Artes.

In 1999, Alejandro received the ‘ Doctor Honoris Causa’ (Honorary Doctorate) from the University of Colima.

When he died in 2000, his ashes joined those of his wife Margarita, under the chapel of the school at the entrance to Comala.

Alejandro loved Nogueras, the place, the earth, the people and simple things.

Over his lifetime he collected pre-Hispanic pieces found in ‘shaft’ tombs around Nogueras. He made a pact with the ancient inhabitants to build a museum so that the pieces would stay on the land. Upon his death, he left the bulk of the Hacienda de Nogueras to the University of Colima. The university runs the small museum that Alejandro designed. There the ancient ceramics, some of his paintings, Christmas cards, designs and furniture from his artisan school have a permanent home. Today the Hacienda de Nogueras also serves as a regional center of historical, archeological and anthropological studies.

The name, Alejandro Rangel Hidalgo is clearly identified with his style, now called ‘Rangelino’. If authentic things resist the passage of time, then Alejandro shines through his work. His art is an allegory for the perfection of technique and construction.

Alejandro could have secluded himself in the beauty and abundance of life in Nogueras. But he understood that the sharing of love and things was superior to the possession of them. In using his talents and his wealth for others, he found a lasting pleasure.

Alejandro worked fluidly as a promoter of culture and a maker of art in all its expressions. This includes scene and costume designs for theater and ballet, illustrations for books, Christmas cards and paintings, furniture, metalwork, floral arrangements and the remodeling of buildings and gardens.

It proved difficult for others to satisfy Alejandro’s standards of aesthetic quality and elaboration. Consequently, he sometimes received harsh criticism and was the center of controversy. And he fought hard for government support for his community projects like the School for Artisans in Comala. At times he took refuge in Nogueras away from the media spotlight.

His friends remember his prodigious memory and gift for story telling. Alejandro himself considered life full of wonderful connections and coincidences. His niece, Emilia Rangel Brun remembers, “After his wife passed away, my two daughters and myself lived with Alejandro for many years.”

During the winter of 2001, Emilia and I met in her uncle’s museum where she works as the coordinator. After her insightful tour in English, I asked about obtaining research materials for Alejandro and the Hacienda de Nogueras.

Emilia reached into the drawers of a cabinet fashioned by Alejandro. She handed me papers, smiling, “I’ve been waiting to give somebody like you…this.”

Some describe the work of Alejandro Rangel Hidalgo as a ‘pedazo’ or fragment of the Mexican soul. I know that I do.

His life is a loving testimony and a universal gift to the spirit. 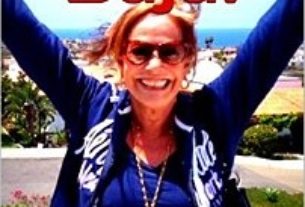 Elections And Business In Mexico