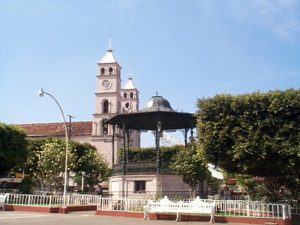 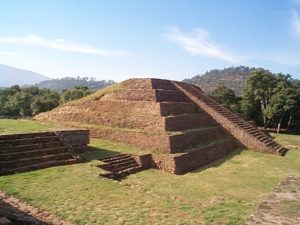 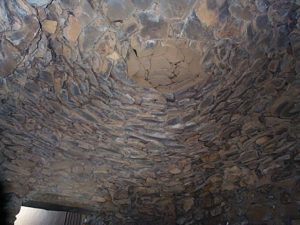 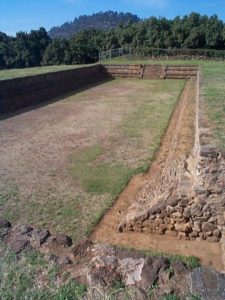 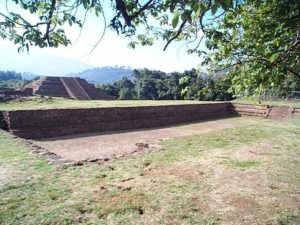 Descending from the mountains, the original (non-toll) Pátzcuaro-Uruapan highway enters avocado-growing country at Tingambato. South of the present-day village of Tingambato is the major archaeological site of Tinganio, one of the few sites in Western Mexico where there are genuine pyramids.

The site was excavated in 1978 and 1979 by one of Mexico’s top archaeologists, Román Piña Chan. It had already been looted by treasure hunters who, however, missed one of Western Mexico’s greatest discoveries—an intact tomb full of ceramic offerings and bones.

Piña Chan found that construction at the site could be divided into two periods. During the first, between AD450 and 600, the ceremonial center took shape. This included an eight meter high eastern pyramid of six superimposed levels and a corresponding western pyramid, partially destroyed by presumed looters. Only the eastern pyramid has so far been restored. Both pyramids have earth cores.

From AD600 to 900 came a change of style to talud y tablero, similar to the Teotihuacan architectural style, named after the pyramids outside Mexico City. This style is evident in both the stairway from the main plaza, with its cruciform altar, to the civil area, below which is the tomb, as well as in the ball court. The ball game was an important ritual, of great spiritual significance, for many Mesoamerican peoples. The object of the game seems to have been to propel, using hips and back, a hard rubber or stone ball through a high stone hoop. This ball court is one of the very few known in Western Mexico, the only region of the country where modern versions of the game are still played.

The most sensational discovery in the investigations of Tinganio came on 8 March 1979 when the unlooted tomb was found. Its excavation was dangerous since its roof was in imminent danger of collapse and only one person could work in it at a time. Many bones were recovered but, surprisingly, only one complete skeleton, of a person who had been seated by the entrance. Among the many partial skeletons in the tomb were 32 skulls representing all ages and both sexes.

Some of the material had previously been buried elsewhere and had been disinterred for reburial here. Perhaps some important person died and the opportunity was taken to rebury his family or workers? Or maybe the extra skulls were the victims of sacrifices? The mountain of ceramic and other artifacts in the tomb included Pacific Ocean seashells (clear evidence of long-distance trade), snails, small full-body figurines and musical instruments made from shells.

Archaeologists received a further surprise in 2011 with the discovery of a second intact tomb, presumed to be that of a high-ranking official. Along with his remains were more than 19,000 green stone and shell beads, further evidence of contacts with coastal communities.

Tinganio’s position—between the tierra templada (temperate zone) and tierra caliente (tropical zone)—made it a natural trading/marketing center, where the produce of the higher areas such as maize and beans, could be exchanged for that of the lowlands such as cacao beans and tropical fruits.

This text is a lightly-edited excerpt from Tony Burton’s Western Mexico: A Traveler’s Treasury (4th edition), used with permission of the author. 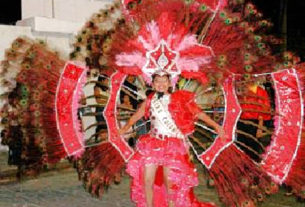 Mexican pigeons do not fly in a straight line!