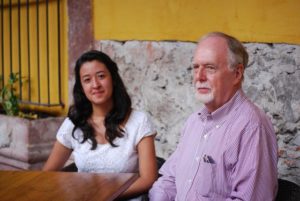 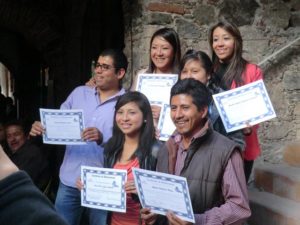 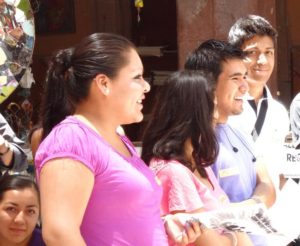 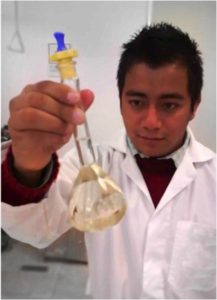 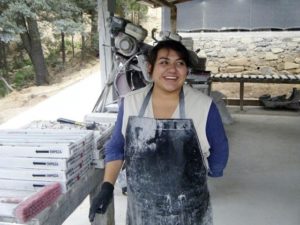 It started in 2001 with supplying a pair of shoes so that a young man didn’t have to go to college barefoot. He’d already won a scholarship. A San Miguel woman named Helen Morris provided them, and a relationship blossomed from there. Soon she was joined by Virginia Wheelwright and several others in providing financial aid, counseling, and technical help in the form of laptops. In the first year their organization funded seven students.

Budgets permitting, today Jóvenes Adelante tries to fund 25 students every year. Since their inception, they have helped 170 students go to college.

Geoff Hargreaves has worked as a mentor for Jóvenes Adelante for a little over a year. He’s an Englishman who lives on a side street off Calle del Cardo in San Miguel de Allende. I sat down with him one morning in his comfortable living room to talk about his experience in the program, starting with how he came be get involved.

“I was working for Feed the Hungry and teaching classes in English,” he said, “and somebody asked me if I would mind also being a mentor for Jóvenes. Since I’d taught university, he thought my experience might be useful in mentoring students. I said I’d give it a shot, and the next thing I knew, since we speak Spanish at home — my wife is from San Luis Potosi — I was interviewing students for the scholarships. We went to the homes of four students and I was really impressed by the quality of these kids, coming from unprivileged backgrounds. I said, ‘Yes, if I can help these kids I’ll be happy to.’ That’s how it started.”

Hargreaves was already comfortable in this role; he had taught college and high school in both England and Canada. His primary subject was Modern English Literature. He is part of a broad process that seeks to provide not only mentoring and financial aid, but life skills counseling, English tutoring, psychological counseling, and aid in interviewing. The organization itself is constantly in need of fundraising and administrative help, so volunteers are always in demand.

“Is this how you met Laura Espinoza?” I asked.

He put his hand up to his closely trimmed white beard as he recalled the time.

“She was one of the students I interviewed on that first occasion. I was impressed by the dignity of her family. When Jóvenes asked me if I would like to be a mentor, I said, ‘yes, and I’d like to be her mentor.'”

“Did they live out in the countryside?”

“No they live in the San Rafael neighborhood. The mother is a woman of enormous dignity. The father is away in the states sending money. He works in the construction trade.”

“She wants to become an accountant. She had no money the first year to go to university, so she worked at an accountant’s office getting experience. The people where she works are really appreciative of her. When she has spare time in vacations, she returns to work there. I was really impressed, too, by the fact that she would not lower her standards. I assumed that anybody from her background would just leap at any opportunity, anywhere. I asked her where she wanted to study.”

San Miguel is not large enough to have a public university of its own.

“I said, ‘Well, I hope you get into the University of Guanajuato,’ and she did. She’s really a first class student.”

“What kind of stipend is she getting from Jóvenes?”

“And that covers the school expenses and a little more?”

“The thing about the public universities is that the tuition is kept very low, so you do have enough to spend on accommodation. But then her mother has to send a pack to Guanajuato every two weeks or so with a big pile of sandwiches.”

“What else should I know about her?”

“She’s quite different from most students in some of her attitudes. Let me give you an example. When I first met Laura, she was sophisticated enough to have questions. Many students do not. Whether it’s because of their social position relative to me as the one conducting an interview, or a natural reticence with someone they perceive to be in authority and they don’t know well, they will often just sit there passively until you ask them something. But Laura said to me, ‘What are you reading now?’ I couldn’t believe this young girl was asking me questions like that.”

“She’s got drive.” I also took her question to mean that she has the ability to act beyond some of the normal social barriers.

“Absolutely. I told her what I was reading and I asked her what she was reading. ‘I’m reading Sophie’s World,‘ she said. It’s a book I taught in Canada.”

This book is a bestselling novel that explores many of the philosophical concepts of the Western World.

“I was really impressed by her sophistication level. Later on, she volunteered to go out and help with a project Mujeres en Cambio was doing.” This is an organization in San Miguel that provides scholarships to rural women.

“What does she get from you?”

“I really don’t know. For me the difficulty is knowing exactly what distance to maintain with a student like Laura, who’s very perceptive and alert, and yet very self-controlled. I want to be friendly, but it’s hard to always know what that means.”

“Does the organization give you guidelines?”

“No, because it would depend on the individual situation. I try to be friendly without being patronizing, and I want to be respectful without being aloof. It’s a balancing act every time we meet. She has a great sense of her own integrity and dignity, and does not want to be patronized.”

“What do you get from her?”

“I’m impressed by her resolution, and her eagerness, stamina and initiative to succeed. I taught for many years in Canada, and the students were positively jaded at times. I had to supply the initiative and the drive. I had to supply suggestions for the future. But with Laura, I don’t have to do that.”

“That was my next question. Are you ever tempted to contrast what you’re seeing in her with the students you’ve had in the past?”

“Absolutely! Because with her, she’s the fountain of energy, whereas in Canada, there was often coaxing, prodding, sometimes punishing to get the kind of results that come spontaneously out of Laura.”

“Where do you see her going?”

“I see her doing extremely well. The people that she works for are very eager not to lose her. I can see why. I don’t know what the prospects are in accountancy in Mexico, because in many things, unless you have a relative in the business, it’s very hard to succeed. I hope for her sake that her talent is recognized and she goes on to do big things.”

This was food for thought. I couldn’t help but see her as a person of extraordinary ambition who refused to be confined by the normal limitations of her background. I met her later in the week when I joined Laura and Geoff for a mentoring session. I had promised to be a fly on the wall and not interfere. That intention was good, but it didn’t entirely work.

Laura Espinoza is a young woman of 21, taller than many Mexican women her age, with a poised and confident manner. She has just finished her first year at the University of Guanajuato, where she is majoring in accounting. I have seen her report card, and the lowest grade for the year is equivalent to B+, and it occurs only once. She does not bear the look of steely determination, but it must lie within her somewhere.

I had caught up with Laura and Geoff at a coffee shop near the plaza. He had brought a newspaper in order to show her an article about how, in Spain, the profession of accountant was gaining in income, even as the economy stumbles badly and unemployment is near record levels for recent times. This mentoring meeting takes place once a month and lasts about half an hour. It’s an opportunity for the student to air any problems or explore obstacles she’s experiencing, not only in class, but in her life. At this meeting, nothing was slowing her down.

Laura told me she is the fourth of nine children. Her three older siblings are in college too, studying business. She spoke of her father’s job in construction, and the scarcity of work locally with the slowdown in the housing market. It made me wonder how educating these nine children is possible. She mentioned that her younger sister, the fifth in sequence, plans to go to college too.

Laura is fortunate to have the part time job with an accounting firm that Geoff had mentioned. Their announced intention is to keep her on when she finishes the four and a half year college program. This is a strong advantage, since they are not family.

The story of Laura Espinoza is only that of a single talented individual, but it illustrates in detail how human potential can be made to bloom with a little help from caring people.

It is difficult to see in this young woman a prototype for the Mexico of the future, or a reason for generalization based on her unique path and determination. Instead, the context appears to be anchored in the values her family has passed on to her, which she has unhesitatingly embraced even as she rejects the inherent limitations of her origins. This has the shape and texture of one of Horatio Alger’s stories, those Nineteenth Century inspirational fables of young Americans who made good through hard work and determination in the absence of any firm prospects. This pattern, while still possible, is not seen as often in Mexico, since the boundaries of class, even today, are more rigid.

In turn, this illustrates the fundamental connection between need and solution as provided by Jóvenes Adelante. It is a one-on-one experience, and it engenders a life-changing outcome at an affordable price. Few investments yield this kind of return, particularly in these times.

Jóvenes is seeking to maintain the level of funding 25 scholarships for the coming year and is having difficulty meeting that end. There is also a need for more mentors and other volunteers. Please visit their website.