Food writers are constantly keeping up with the latest culinary trends and, although the buzz words “gluten free” are not new, the number of cookbooks, food columns, and even entire websites devoted to gluten-free diets during 2011 was impressive. And they continue to appear; every day another gluten free cake mix or pasta makes its debut on supermarket shelves north-of-the-border. And in Mexico? Not quite as much. Because the basic, traditional Mexican diet is essentially gluten free.

Gluten is a type of protein commonly found in wheat, rye and barley, all of them introduced by Europeans and not included in the diet of pre-Hispanic Mesoamerica. Corn, the subsistence carbohydrate of Mexico, is gluten free, and so are beans, sources of protein when consumed with corn, and amaranth, an important ritual food in ancient Mexico. Of the grains cultivated here after the conquest, rice stands out as being a gluten free Mexican staple food. (The pasta eaten as a second course with some comidas is still far behind rice in terms of per capita consumption.)

The problem with gluten is that it can contribute to certain serious health issues. Celiac disease is a gluten allergy that damages the small intestine and can disrupt the absorption of nutrients from food. Eliminating gluten is vital to celiac patients, but it has also become fashionable as part of “cleanse” diets and weight loss programs. Medical science now recognizes something called “gluten sensitivity” which, though not as serious as celiac disease, can cause intestinal discomfort.

Rigorous avoidance of gluten is, of course, unnecessary to anyone not suffering from these ailments, and one of the reasons it may have become so popular is that it basically leaves out many of the refined carbs, a weight loss strategy that is nothing new. For those who do need to leave gluten out of the culinary picture, a traditional Mexican diet is not only helpful, but appetizing as well. All of the herbs, spices, chiles and fresh fruit and vegetables that make Mexican food so tasty can be included in a gluten free diet.

To avoid gluten, use corn tortillas even when making Tex-Mex dishes like burritos, which are usually made with wheat tortillas. Corn tortillas can be made quite flexible by soft-frying in less than a quarter inch of oil. As soon as the first side begins to puff up, turn, cook for a few more seconds, and remove to drain on paper towels. To use even less oil follow Rick Bayless’s advice and lightly brush both sides of tortillas with oil, stack them, wrap in a damp paper towel and microwave for 30-60 seconds.

Gluten free pasta is available in Mexico City and other major markets, as well as in health food stores and Asian stores, where rice noodles are sold. Pasta, however, was not part of the pre-Hispanic diet, but amaranth was. I recently read that amaranth is supposed to be one of the upcoming “food trend” items of 2012, which makes me happy because I’ve been promoting it for years. (See Mexico’s Grain of the Gods.) Used in everything from moles to desserts, it is wonderful in cold weather soups and stews. It also makes a good hot breakfast cereal; just be sure to buy the ‘puffed” variety, which looks like a bag of very miniature tapioca pearls. And amaranth contains from 75% to 87% of required nutrients.

Another non-glutinous grain that has become popular in recent years is quinoa, an ancient Peruvian native that is now common in the U.S. and other countries, and catching on in Mexico where, like just about anything else, it can be found in the Distrito Federal. I’ve used it in Mexican-inspired salads and side dishes and, like amaranth, it makes a good breakfast porridge.

Although many Mexicans have adopted several foreign food products — some of them not very healthy — the basic corn-beans-and-rice mealtime staples are still the most widely eaten and, as a bonus, are gluten free. Following are some Mexican-inspired options to get the year off to a healthy start. 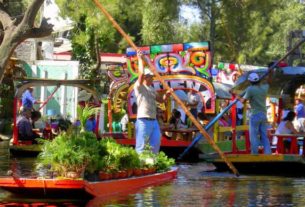