From my seat near the aisle I am so close to the glowing casket that I can almost touch it.

Although I was baptized 70 years ago, until I came to this little Mexican town I had only seen the inside of a Catholic church two or three times. But now from time to time I go to the one little church in this pueblo to be a part of some religious event. Although I speak some Spanish, I don’t know the words for the services. I have strained to learn the words so I can join the children in song. Their voices are unaffected. They don’t seem to care that I do not know when to stand, kneel, sit, unfold my hands or cross myself. They smile at me, but not as though I was a fool or an infidel. Because I am old, they are forgiving, not mocking my clumsiness in a holy place. I suppose they think if I am here, I must love and respect El Señor. It is enough.

Because I’m an old snoop, I know the women of this village do not like the traveling priest, Padre Inocencio, who comes, when he pleases, in any kind of mood he brings to this sacred place. They also did not like Padre Octavio from San Pedro. They want their own priest – a quiet man, humble and punctual. One day they shall have a good one, with black shoes that shine and a strong, sweet voice.

This little village is near the sea, and most of the men and women work at the fishing resorts. The men are waiters, gardeners and fishing guides on the boats, hotel front office people. The women work as maids, cooks and housekeepers. If the resorts were to close, the little village would survive but it would not be the same. The people of the village wear T-shirts the gringo clients give the boat captains and the maids. At first I was offended that the gringos were using the local people to spread the advertisement on the shirts. After a while I realized that anyone in this little pueblo who saw the “Crazy Raven Bar” or “Vermont’s Finest” on a shirt could not know the meaning of the message.

Less than 2,000 souls here – did I mention that? A few stores, a soccer field, a dance pavilion, a clinic, phone office. Not much going on so when something happens in the church, people come to see, pay their respects.

Today there is a funeral for a gringo woman who was killed in a car wreck. Ten or twelve of her family members flew in, bought a beautiful casket and arranged the service. Although the woman had a home here where she lived for half the year and although she had many friends in the pueblo, the church was only one third full. I will guess that if Padre Inocencio were not in the church, the old women of the town would have filled the room, not just with their presence but with song that would wrench tears from the eyes of those who were cold around the heart. When we have the old priest from Insurgentes, a blind worshiper would notice the difference just by the lilac and rose scents the señoras wear; it follows me home, I carry it in my hair, on my clothes.

I love to watch the señoras. Left hands fan their sweaty brows with small, worn prayer books. Right hands hold or share a hymnal. Tiny bats flit across the vaulted ceiling, in and out through the tall open doors and windows of the chapel. With the second or third hymn, the bats are driven from the church – unable (or unwilling) to compete with the sopranos. Some of the older women hobble to church on canes. Beneath their shawls, discreet white blouses announce nothing, introduce no one, bring attention only to the little buttons that look like real pearls.

Three brown-skinned eels in jeans and T-shirts stand near the door closest to the altar. They are quiet, wide-eyed, making eye contact with the other kids in the front pews who are awed by the marble-quartz glimmer of the casket – mother of pearl, gold, silver, inscriptions and huge ornate handles. Although they mouth the words of the hymn, there is not a real sound among the three boys. Their arms folded, they stand like tiny bishops, inspecting, checking, their silence a kind of tacit approval.

From my seat near the aisle I am so close to the glowing casket that I can almost touch it. The padre walks solemnly down the aisle, blesses the coffin with holy water. The water is in a small glass bottle like the ones I buy that contain hot sauce, Huichol, salsa picante. It seems wonderfully natural and without vanity that he takes the Eucharist from a splendid golden challis but blesses the babies, the brides, grooms and the dearly departed from a salsa bottle.

There are more people at the cemetery than I remember from the church. A short, fat woman in front of me picks up her whining two year old and smiles at me as she leaves. She wears a T-shirt that reads “Life’s a Beach – Friday Harbor.” As the dirt is shoveled over the shining coffin, the dead woman’s grandson reads a tearful poem. The woman’s family of mourners stands holding hands, eyes puffy from crying. They want the service to be over – want to be back on the plane, back in the safety of their own homes, far from this dusty place where fate and a careless driver, in an unbelievably exact convergence, have taken this warm and caring woman from them forever.

The expensive chamber in which the woman will sleep though eternity is the finest one ever lowered into a grave in this little cemetery. I can almost read the minds of my Mexican friends and neighbors. Their thoughts about the casket and all the lovely flowers are not envy but respect.

“She must have been very important. They are showing her so much love; see how they honor her.”

I think the lady who died was lucky to be close to a God who has no vanity. He would love her just the same in a plain wooden box. This little Mexican God tells me I have enough vanity for the whole village. I can’t help it. I want a service with a new priest, old women who will shatter the windows with their song. Most of all, splashed on my box, I want the holy water in the salsa bottle. I hope a new priest will have one just like Padre Inocencio. Just in case, I am filling my next empty bottle with soapy water so it can soak. 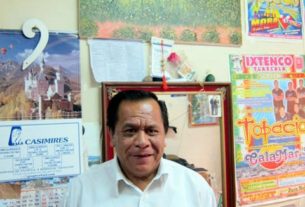 A Visit to Don Otavio: A Traveller’s Tale from Mexico by Sybille Bedford