Lázaro Cárdenas, the most left-wing president in Mexican history, became an international bogey man but a national hero by expropriating the foreign oil companies in 1938. Though even such political enemies as the Church and business conservatives applauded this nationalistic gesture, Mexico faced a grim period two-year period when the United States, Great Britain and Holland agreed on a boycott of Mexican oil.

What saved Mexico’s oil industry was the Second World War. Disturbed because Cárdenas was selling petroleum to Hitler — which he had to do to keep Mexico from drowning in its own oil — the boycotting powers lifted the ban. Thanks to a global conflict, the expropriators had gotten away with their daring move.

Oil would become a truly major factor in Mexican politics in the late 1970s and early 1980s. New deposits had been discovered in the Gulf area in 1972, while Luis Echeverría was in office, but their true magnitude would not be revealed until after the accession of his successor, José López Portillo.

Echeverría came to power with an obvious guilty conscience about Tlatelolco (Student massacre in 1968, Mexico City). To then President Díaz Odaz, he must have seemed a Jekyll and Hyde. On his way up, Echeverría was completely in the “bean counter” tradition, a loyal, servile, anonymous bureaucrat who entered government service in 1946 and served eight years as private secretary to General Rodolfo Sánchez Taboada, president of the ruling Institutional Revolutionary Party (PRI).

Between 1954 and 1958 Echeverría was chief administrative official in the Ministry of Education, where he combined quiet efficiency with a gift for negotiation. This brought him to Díaz Ordaz’s attention. Here was an individual who combined the attributes of being hard-working, loyal — and easy to control. He made Echeverría minister of the interior and Echeverría in every way justified his confidence at the time of Tlatelolco. From this came the dedazo (The ‘magic finger’ by which the outgoing President identifies his successor)– with Díaz Ordaz certain that he was being succeeded by a man he could manage.

Then — as far as Díaz Ordaz and his fellow conservatives were concerned — “Mr. Hyde” came out of the closet. Moving sharply to the left, Echeverría now presented himself as the new Cárdenas. He released most of the students imprisoned after Tlatelolco, ordered rigid price controls on basic commodities, added a 10 percent tax to luxury items and a 15 percent surtax to bills in first-class restaurants and nightclubs, increased subsidies to universities and technical institutes and gathered the highest percentage of National Autonomous University (UNAM) graduates (78 percent) in his cabinet. (UNAM had been the cradle of student leaders whose militancy brought on Tlatelolco.) Remarked Díaz Ordaz ruefully: “I thought I knew him but I was mistaken.”

Though Echeverría was able to co-opt some of the former student radicals, others remained intransigent. In an article in the left-wing periodical Siempre, he was described as a “historic criminal.” On a visit to the UNAM campus, he was booed and stoned. Some radicals took arms, notably those who formed the revolutionary 23rd of September League. A former schoolteacher, Lucio Cabañas, organized a guerilla band in the mountains of Guerrero.

Echeverría also developed what many considered delusions of grandeur. He wanted to be Secretary-General of the UN after his term and he tried to enlist Mother Teresa’s support in a bid for the Nobel Peace Prize. Gonzalo Santos, one of the last of the old-fashioned caciques (regional bosses) voiced the opinion that Echeverría was mentally unbalanced.

A lavish public spender, Echeverría kicked his Treasury Minister upstairs (as ambassador to London) when he pointed out the difference between the internal and external debt and said Mexico had reached her limit in both. Then Echeverría made the vainglorious announcement that henceforth the country’s economy would be managed from Los Piños (the presidential palace).

Echeverría’s term was due to end in 1976. The same year witnessed the death of Daniel Cosío Villegas, one of Mexico’s most brilliant intellectuals. Shortly before passing, Villegas made this gloomy comment to a friend: “Have you seen the size of our external debt? It’s risen to almost $26 billion. We are screwed.” As if to lend weight to Cosío’s words, Echeverría was forced to devalue the peso from 12.50 to the US dollar to 20 pesos to the US dollar just before he left office.

Though few knew it at the time, the transition from Echeverría to his successor was one of frying pan to fire — in this case an oil-fueled fire. José López Portillo was a member of the old, Spanish-descended Creole aristocracy. Until he was forty, in 1958, he had a private law practice. He also taught law at UNAM, but did not appear greatly interested in politics. Then he entered public service in the first year of López Mateos’s presidency. He held a series of minor posts through two administrations and succeeded in winning the close friendship of President Luis Echeverría. As young men, the two had taken a trip to Chile and Argentina. Though López Portillo had no background in economics, Echeverría appointed him finance minister toward the end of his term. This was the springboard to his becoming the destapado (“uncovered one”) who would be the next presidential candidate of the PRI and next President of Mexico.

Historians will be tempted to draw a parallel between this succession and one that took place in Rome in C.E. 37. The repressive, paranoid old tyrant Tiberius had just died and the new emperor was a young man of twenty-five whose father had been one of Rome’s most popular generals. As the empire reverberated with joy, the new emperor promised an enlightened rule in which all secret police dossiers on political enemies kept by his predecessor would be destroyed. The young man was Caligula.

LIke Caligula, López Portillo got off to a good start. His inaugural speech was well-received for its sobriety and good judgment. Instead of grandiose promises, López Portillo committed himself to two years of recuperation (from Echeverría’s extravagances), followed by two years of consolidation, and two more of growth. He also pledged to promote economic growth by establishing an “Alliance for Production.”

For the first two years things went well. The economy showed signs of revival and oil reserves were discovered to be far larger than originally predicted. Again, we return to the Roman analogy. Caligula’s reign of extravagant misrule has been traced to a brain fever which, according to the Greek historian Philo, overtook him eight months after he came to power. Though Caligula survived the illness, it deranged him to the point that he practiced unspeakable cruelties and publicly proclaimed himself a god.

In López Portillo’s case, it was oil rather than a brain virus that transformed him into a spendthrift that made Echeverría look like Ebenezer Scrooge. It also induced a form of personal megalomania, one that led him to place members of his family in prestigious government jobs and install his mistress as Secretary of Tourism. A boyhood friend, Arturo Durazo, became chief of Mexico City’s police. On a $350 a month salary Durazo was able to acquire a string of race horses, a $2.5 million estate (that included a discotheque) and a pleasure palace on the Pacific coast he called “the Parthenon.”

Between 1976 and 1980, López Portillo rode the crest of the wave. Oil production rose from 800,000 to 2.3 million barrels a day and earnings from a half billion to 6 billion US dollars. With international bankers virtually forcing loans on Mexico, López Portillo went on a spending binge that included government construction, public works, social welfare projects and subsidies of consumer goods.

Then came the oil glut of the early eighties. Other producers reduced the price of oil to Mexico’s customers and Jorge Díaz Serrano, director of the government oil monopoly PEMEX, sensibly lowered the price of Mexican oil by four dollars a barrel.

But López Portillo would have none of this defeatist attitude. He promptly fired Díaz Serrano and then raised the price of oil by two dollars. The increase came with a threat that if customers failed to buy at the higher price they would get none of Mexico’s oil in the future. The buyers called his bluff. They bought the cheaper oil from elsewhere and Mexico now found herself in the position of being priced out of the market. By 1981, 87 percent of every dollar of PEMEX’s assets was owed to foreign banks.

All this caused nervousness in the financial community. Capital began fleeing the country, $9 billion between July and August of 1981 alone. Pressure on the peso was increasing but such was López Portillo’s hubris that his response was a blustering statement that he would “fight like a dog” to defend the peso. (To this day, he is greeted by barks when he appears in a public place.)

When devaluation came, it was the worst in Mexico’s history. In July 1982 the peso plunged from 22 to 70 to the dollar and kept right on going down. By August Mexico was virtually bankrupt. But López Portillo was nothing if not a buckpasser. On September 1, 1982, the day of the Informe (“State of the Union Message”), he blamed the bankers and sacadólares (“exporters of dollars”) for the crisis and nationalized the banks.

This was the situation encountered by López Portillo’s successor, Miguel de la Madrid. Born in 1934, He was the first of Mexico’s “Ivy League” presidents, having graduated from Harvard. (His successor, Carlos Salinas de Gortari, also has a Harvard degree and the current president, Ernesto Zedillo, went to Yale.) Though he had a good record in the areas of finance and public administration, de la Madrid had little practical political experience.

Pledging himself to “moral renovation,” de la Madrid sent two top figures of López Portillo’s administration to jail. One was Arturo ( “El Negro“) Durazo, the police chief who was so ingenious at stretching his $350 a month salary. (Here the nickname was not racial but referred to the blackness of his deeds.) Durazo, who was charged with murder, drug trafficking and extortion along with corruption, fled to the United States but was extradited in 1986 and sentenced to a long prison term. The other was former PEMEX chief Jorge Díaz Serrano. Though Díaz Serrano was correct in advocating a reduction in oil prices, his management of PEMEX had been flagrantly dishonest.

For all his good intentions, de la Madrid could do little to allay Mexico’s economic woes. In 1987 alone, the peso plummeted from 950 to 2,300 to the dollar. The debt continued to increase and de la Madrid had to take such unpopular measures as eliminating 51,000 federal jobs and slashing the salaries of other government employees.

Then nature struck a terrible blow. On September 19, 1985, a devastating earthquake (measuring 8 on the Richter scale) struck Mexico City, killing eight thousand and causing $4 billion in damage. Inflation continued to be a menace, registering 63.7 percent in 1985, 105.7 percent in 1986 and 159 percent in 1987. In December 1988, when de la Madrid concluded his term, the foreign debt was up to a staggering $105 billion. 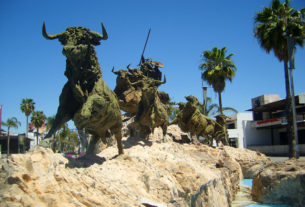 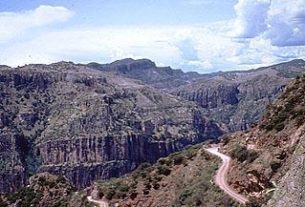