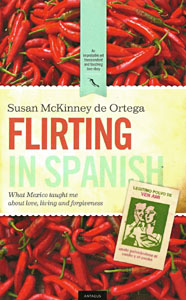 Flirting in Spanish is not a “how-to-do-it” book. It is the true story of Susan McKinney, the 33-year-old daughter of former NBA coach Jack McKinney, who moved to Mexico to write, but soon met and “fell hopelessly and utterly in love” with Carlos, a poor Mexican teenager.

The story began in 1992 in San Miguel de Allende. Susan, in Mexico less than three months and having “decimated whatever savings I once had,” was no longer “The Coach’s daughter cruising the streets of Portland, Oregon on the back of a convertible showered with confetti and roses after the Trailblazers won the NBA championship. Now I was the Girl Who Took her Clothes off for Five Dollars an hour,” modeling in the nude for three hours a session twice a week. To supplement that meagre but easy-earned income, Susan began teaching English “a few hours a week for less than minimum wage.”

She lived, incidentally, in a casita “owned by the people who’d written A People’s Guide to Mexico,” a perennially popular book with readers of MexConnect.

Carlos, the poor Mexican teenager, was indeed wise for his years; after her first class was over, he alone “remained, still seated at the second desk in the middle row, watching me.”

Immediately attracted to him — and he to her — Susan began go out with Carlos in the evenings to meet other young Mexicans, including a few of her students. Before too long, in this new world of the Mexican young, a world of “pure sensation,” “cheeks slid until our lips touched,” and “We kissed, slowly, slowly, suspending the moment into one long taffy pull of time. Just a girl kissing a boy.” But by Monday, filled with “excitement and dread,” she wonders “What happened in Mexico to someone who had kissed a student? I would be handcuffed, jailed, made to appear before parents for stoning.”

Only months earlier, back in the states, Susan “gave up chasing busboys” but soon fell in love with her handsome, intelligent, courteous, and tender young Mexican student.

Carlos, almost unique among young Mexican men, had no interest in casual sex, in “seducing the gringa,” the sport of so many young mexicanos who have discovered gringas to be “easy.” A friend of Carlos ranked the gringas this way: “on a scale of one to ten, if a guy can sleep with a gringa, it’s a two, with a Chilean, it’s a six, and with a Mexican fresa, it’s an eight and a really good-looking fresa, a nine.”

Having been traumatized by a 1980 invent involving professional athletes who mistook her for a groopie rather than the coach’s daughter, Susan was wary of love. She realized “that I was the one blocking the love.”

This, then, becomes a time of healing for Susan. Back in Philly, she revealed to her family that she had a young Mexican lover, and by the time she returned to Mexico, the situation was now “clear, and worrisome, to everybody.”

Months pass before Carlos invites her to his home to meet his family. It is a very modest home but soon she finds herself living there, trying hard to adjust to the difficult living arrangements where everyone’s belongings belong to everyone, and this includes her expensive motocycle boots, her sweaters, even a treasured belt that gets another whole punched in it by a brother of Carlos.

“We had no phone, no hot water, no space, and little money. The kids on the hill sucked fried chicken feet and didn’t wipe their noses. I was five months pregnant and fretted daily about what kind of life we would be offering our child.” Carlos, of course, was used to the condition of their daily life, having grown up with “five sisters and brothers all in one room.”

The note on the front cover tells it all: “What Mexico taught me about love, living and forgiveness.”

I thought it was a terrific story.

Kudos also should go to Amy McAdams, who designed the book. From the exciting front cover, through the story itself, to the back cover, it is a joy to hold.

Inside Mexico: Living, Travelling and Doing Business in a Changing Society