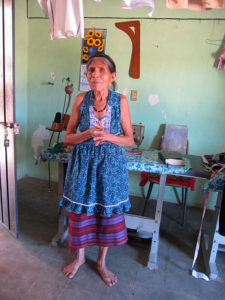 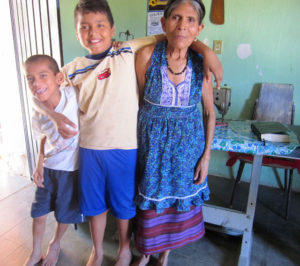 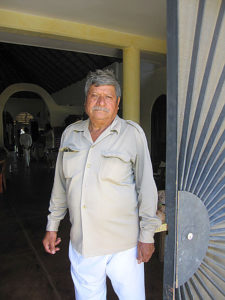 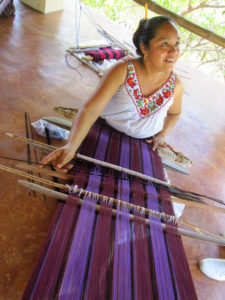 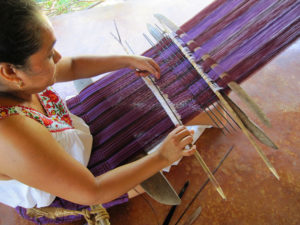 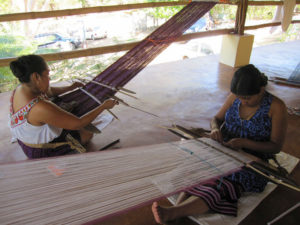 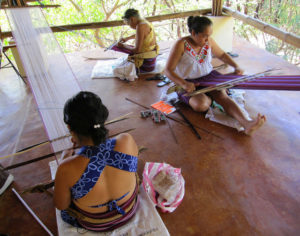 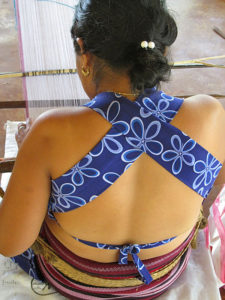 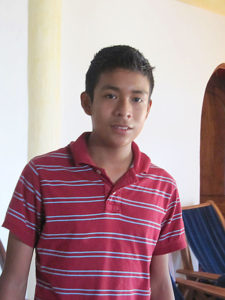 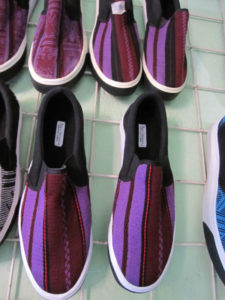 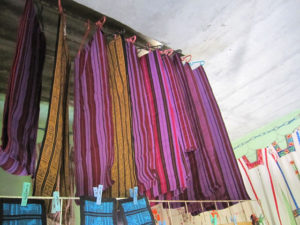 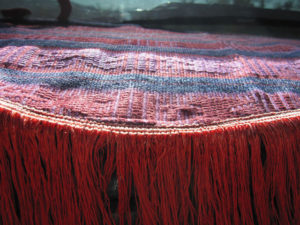 They were calling for passengers in the camionera central in Pinotepa Nacional near the border of Oaxaca and Guerrero. We had dodged taxis, buses, minivans and pickup trucks in our search for the sitio Pinotepa de Don Luis. And now several animated drivers yelled and waved us to their colectivo trucks. Benches lined the pickup beds and tarps protected passengers from sun and rain, turning the trucks into modern covered wagons for the 15-mile trek northeast of Pinotepa Nacional.

Amidst the hawkers we chose a handsome young driver because he invited us to sit next to him in the truck’s cab. The probably-vinyl front seat was upholstered neatly in hand-woven white cotton trimmed with purple stripes. The seat covering and the intricately embroidered-by-his-grandmother piece on the dashboard signaled to me we were on track.

Two women friends and myself (three of a “certain age”), were searching for the remote Mixtec village where women weave their wrap-around skirts on backstrap looms, using yarn dyed blue from the anil (indigo plant), red from the cochineal (cacti bugs) and purple harvested from snails. It’s the only place in Mexico where this pre-Hispanic process is still practiced. The skirts, called pozahuanacos, have horizontal stripes of red, black, blue and purple. Women wear a halter-style apron on top, in response to modern public reaction to their bare breasted custom. You will see this distinctive dress along the Costa Chica, the part of Oaxaca from Puerto Escondido north to the state of Guerrero.

We were told that Mixtec men have been squeezing the color purple from the Purpura pansa mollusk for about 3,000 thousand years. Proper harvesting doesn’t kill the snail. Using a small wooden rod, they gently pry the animal from the rock crevices, where a slight squeeze with thumb and forefinger elicits a squirt of urine. Then comes a white milky substance which is actually the snail’s defense mechanism. This is squirted onto a skein of handspun cotton hanging from the harvester’s arm. Dried in the sun, the yarn turns to yellow to green to light purple. The snail is returned to its rocky roost.

According to Habacuc Avendano, head of the Cooperativo de Tintoreros de Pinotepa Don Luis, the black murex mollusk population is one-fourth what it was in 1950. Locals and foreign poachers have decimated the sacred snails along Oaxaca’s Pacific coast, so that today they are harvested only in remote coves in the Bahias de Huatulco, about 130 miles from Pinotepa de Don Luis.

The Mixtec people of Pinotepa de Don Luis called the government’s attention to this endangered species which, in 1998, led to the creation of Huatulco Mexico National Park. It is impossible, however, to enforce the limited harvest and much poaching continues today, according to Habacuc.

Only 19 Mixtec males (all live Pinotepa de Don Luis) are registered to legally harvest the snails’ inner liquids. Working in pairs six months at a time, each man collects enough secretions to dye five skeins a year. They risk injury and even their life climbing on slippery rocks, fighting the surf and battling strong winds on this rugged coast.

“You have to know a lot about sea currents, the weather, and moon cycles, just like fisherman,” Habacuc explains. “Those that die, we bury them there.”

While preserving this ancient process is treacherous and arduous work, he notes, “Before roads, people had to walk eight days to get to the coast.”

* * * * *
The only information we had to guide us in our off-the-beaten path search for these weavers was the name of a women’s cooperative, Tixinda, in Pinotepa de Don Luis. Tixinda means sacred caracol in the Mixtec language.

The covered wagons were well-suited for the trip. Although the narrow, twisting road that went through several small pueblos was paved, the rugged landscape of rocky fields grazed by a smattering of cows and goats hinted of a “wild west” life. Once in awhile, we passed donkeys loaded with firewood, led by men and women who live in these remote villages, sustained mainly by farming and handicrafts. Fence posts of tree branches strung with barbed wire separated the fields and prevented animals from straying into the road. Farmers merely cut the branches and stuck them in the ground, yet some, not prone to die, continued to sprout green leaves, some growing to the size of young trees.

Arriving at the small mercado in Don Luis, we were greeted by a group of curious onlookers. The elderly indigenous women wore their traditional, horizontal-striped wrap-around skirts and apron tops. An English-speaking man approached us. Someone had waved him our way and he seemed proud to be speaking English. He flagged a taxi, instructing the driver to take us to the Tixinda cooperative store. It was only a few blocks along cobblestone streets, but we would have been confused by the numerous twists and turns. There was no weaving going on and only a smattering of weavings for sale, including handbags, huipiles, shoes, and lengths of material for wrap-around skirts.

Maybe it was the wrong time of day, or we were in the wrong place?

I found the answer a few days later in Puerto Escondido. I was in the right place at the right time. At Casa Tejesuenos, a large palapa-style house perched on a hillside, Sunday shoppers responded to a once-a-year event, sponsored by “Dreamweavers Tixinda,” a project spearheaded by Patrice Perillie. “We are creating an awareness of and market for the Mixtec weavers of Pinotepa de Don Luis,” she explained. “Sales totaled 45,000 pesos that day.”

The beautiful Mixtec weavings (bedspreads, tablecloths, runners) covered every piece of furniture: tables, beds, chairs, lounges. Huipiles, blouses and shawls hung from portable rods. On the porch, women weavers from Don Luis were spinning yarn and weaving on backstrap looms. It was here that I met Habacuc Avenando and learned the traditional way of harvesting Tixinda.

“Siéntate,” said a good looking teenager, pointing to a chair next to him. My browsing and shopping completed, I held a plate with a steaming tamale and did indeed need a place to sit.

The young man, his smooth skin the color of a mocha latte, said his name was Eduardo. He brought me a glass of cool jamaica and I told him I had visited his pueblo a few days before. This both pleased and surprised him.

To prove that I had indeed been to his remote village, I showed him a photo (still in my camera) of two boys and their grandmother. They were his friends, Eduardo said. He then went into the kitchen and fetched me another tamale and glass of jamaica. Like most young men from his village, he wore jeans and a tee shirt. Young women wear western-style cotton dresses.

Although pre-Columbian traditions are fading in Oaxaca, blending with modern ways, the men and women of Pintotepa de Don Luis strive hard to preserve their millenia-old tradition and to protect the Tixinda.

To visit the weavers or to accompany the men as they harvest the sacred purple dye, you can contact Patrice at mexicandreamweavers@hotmail.com.